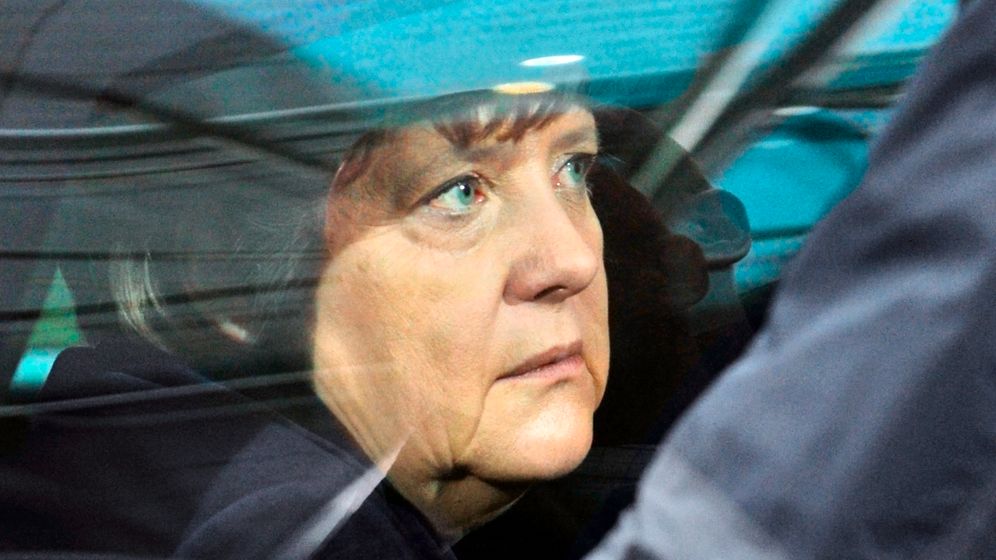 The breakfast for conservative ministers prior to Chancellor Angela Merkel's weekly cabinet meeting is considered the most secretive and concentrated gathering in the day-to-day business of political Berlin. There are no leaks, no mobile phones ringing and no one leaves the room.

Last Wednesday, however, the morning discussion was abruptly interrupted. The ministers belonging to Merkel's center-right Christian Democratic Union (CDU) and its Bavarian sister party, the Christian Social Union (CSU), were just perusing the first items on the agenda when a Chancellery employee told Merkel that she had an urgent call. Jens Weidmann, Merkel's economic advisor, was on the line to tell her that Axel Weber, president of the German Central Bank, the Bundesbank, intended to announce his resignation that day.

When Merkel returned, the cabinet members could tell by the expression on her face that something very unpleasant had happened -- so unpleasant, in fact, that close associates would later call it a "catastrophe." Merkel conferred briefly with Finance Minister Wolfgang Schäuble before calling Weber. It quickly became clear that there was nothing that could be done.

He had given careful thought to his decision, the banker told Merkel. He said that he felt isolated as a result of his strict, anti-inflation policies, and that he was practically alone in his views within the European Central Bank (ECB). Under these circumstances, Weber explained, he could not continue in office, and certainly could not become ECB president.

Merkel's objections fell on deaf ears, but she did convince the country's top monetary official to make one concession: Weber promised that he would not make a public statement until he had met with Merkel in person.

What followed was two days of intense confusion. Announcements that Weber was going to issue a statement were made and then cancelled. There were also rumors that the Bundesbank president was to succeed Josef Ackermann as chief executive of Deutsche Bank. Speculation over Weber's motives was rampant.

Even on Friday, after Merkel had met face-to-face with Weber, clarity was at a premium. In a tersely worded afternoon statement, it was announced that Weber would step down at the end of April, and that his successor would be announced this week.

The chancellor must now find a new Bundesbank president in record time. But this marks only the beginning of Merkel's difficulties. The fact that she is losing her most prominent monetary policy expert in the midst of the euro crisis is the lesser of her problems. It is more worrisome for Merkel that Weber's resignation makes a mess of her strategy for the future architecture of the euro.

A Symbol for Euro Skeptics

She was determined to install Weber as ECB president, in the face of much resistance, especially from southern Europe. She had wanted to send a message that Europe's monetary policy is based on established German principles, is largely independent of political meddling and is strictly oriented toward stable prices.

Instead, Weber now threatens to become a symbol of those among Merkel's conservatives -- and within her junior coalition partners, the business-friendly Free Democrats (FDP) -- who are skeptical of the euro and have long been uncomfortable with measures to rescue the common currency. "If (the ECB president) holds a minority opinion on key issues," Weber said in an interview with SPIEGEL, "then it has a negative effect on the credibility of the office."

Things couldn't be worse for the chancellor, particularly given the approaching state elections in Rhineland-Palatinate and Baden-Württemberg. She had hoped to be able to portray herself as a chancellor who staunchly supports the euro -- one who ensures that no German money goes to Europe without getting something in return. But now, the head of the country's central bank has made public his fears that, in the Europe-wide negotiations on saving the common currency, German discipline could lose out.

The two politicians are not just at odds over monetary policy. Apparently there is also a deep personal rift between them. Until recently, Merkel and Weber were seen as close allies, whose relationship was partly bolstered by the fact that former students of Weber, from the time when he was an economics professor, hold key posts in the Berlin government. Both Finance Ministry State Secretary Jörg Asmussen and Merkel's economic advisor Jens Weidmann were once students of Weber's.

Now, however, it would seem that Merkel and Weber have been talking at cross purposes for months. Just who might be responsible for the miscommunication, however, remains unclear.

Only last spring, everything seemed to be going well. Merkel had taken steps in Europe to ensure that Weber was almost certain to succeed ECB President Jean-Claude Trichet, whose term expires in November. With her help, Portuguese politician Vítor Constâncio had been named ECB vice-president. Based on the complicated arithmetic of power in Europe, this meant that the future president had to come from a large northern European country. Everything pointed to Weber, and even the French had signaled their approval.

But then last May the ECB, in an effort to save the euro, decided to buy up government bonds of highly indebted countries like Greece, Portugal and Ireland. In Weber's view, this was a serious violation of the ironclad principle that money should not be printed to finance government debt. In addition to criticizing the measure internally within the ECB council, Weber took the unusual step of making his reservations public. In doing so, he not only incurred the wrath of ECB President Trichet ("There is only one ECB statement, and it comes from me"), but he also ran afoul of most other members of the ECB governing council.

A Prisoner of His Convictions

Even Merkel complained to advisors about Weber's undiplomatic behavior. Still, she remained determined to see him elected as ECB president -- as a signal to Europe that Germany would adhere to the monetary policy principles of clear stability.

In mid-January, Weber and Merkel met at the Chancellery to clarify their differences. The meeting was meant as a prelude to a joint campaign for the ECB presidency. But something apparently went wrong, because the two sides portray what transpired at the meeting differently.

The Merkel camp claims that the chancellor made it clear that Weber was to be the German candidate for the ECB post, that she intended to make a public announcement to that effect in late March, and that Weber had agreed to the plans.

Weber, for his part, says that he made his reservations about a candidacy clear to Merkel at that meeting, and promised to decide later whether he was interested in the job.

Somewhere along the line, however, the fact that Weber had reservations must have been forgotten. Berlin began campaigning for Weber in the weeks that followed that meeting. Finance Minister Wolfgang Schäuble, for example, returned from a meeting with his French counterpart, Christine Lagarde, with the message that the French were willing to abandon their reservations about Weber.

For his part, however, Weber's concerns about the job began to grow. How could he assume responsibility for a policy he believes is fundamentally incorrect? He was horrified to hear more and more European politicians speaking out in favor of euro bonds, and he was disappointed that Merkel, in negotiations over the future euro crisis mechanism, failed to push through automatic, tough sanctions against those in violation of European budget deficit rules.

Europe, in short, was going in a direction that did not reflect his convictions regarding sustainable monetary and fiscal policy. After spending the weekend before last conferring at length with his wife, Weber decided to clarify his policy in the ensuing days.

He informed the board of the Bundesbank on Tuesday, and then he spoke with ECB President Trichet. He planned to notify the chancellor the next day, but before he could, it was no longer necessary.

Media outlets got wind of his decision and the resulting stories triggered the information chaos that embarrassed Merkel in Europe and destroyed Weber's standing in the German cabinet. "The man did enormous damage, not just to the government," says one minister, "but also to Germany and the entire euro zone."

The chancellor has little time to solve her personnel problems. And with Weber out of the running, it is clear that there will be no new German candidate for the ECB presidency. Jürgen Stark, the ECB's German chief economist, could have been a candidate, but he would not be able to complete a full eight-year term because he has already served on the ECB council for more than four years.

Klaus Regling, head of the European Financial Stability Facility (EFSF), would also have been an acceptable candidate for many of the 27 heads of state and government who elect the new ECB president. He is at a disadvantage, however, because of his lack of monetary policy experience, despite the years he spent working in the International Monetary Fund (IMF), the German Finance Ministry and private industry.

Besides, Regling has different plans for the future. As he has already indicated to German government representatives, he would like to be president of the new European Stability Mechanism (ESM), which will replace the current bailout fund starting in 2013. The European Commission envisions the new facility, which is designed to permanently combat crises in the euro zone, becoming a powerful institution almost as important as the ECB.

Thus, the carousel of candidates for the top ECB job will continue to turn in the coming weeks without a German candidate on board. "Weber was our only candidate, and that's that," German government representatives say with a touch of resignation. By contrast, the prospects of Mario Draghi, governor of the Italian central bank, have risen.

Weber's successor as president of the Bundesbank, on the other hand, seems relatively certain. Everything points to Jens Weidmann, the chancellor's economic advisor. Weidmann, who holds a Ph.D. in economics, was already slated to move to Frankfurt during the course of the year, but only as Bundesbank vice-president. Weber's departure is giving him a fast-track to the top, although his wait could be prolonged by a qualifying period in which Weidmann would have to serve as an ordinary board member first.

The transition will not be without complications. For an institution like the Bundesbank, which strongly emphasizes its independence, it is problematic for the chancellor's closest confidant on economic matters to be assuming its top post. The choice of Weidmann is also not universally supported in the cabinet, with some members of the government wondering if the 42-year-old economist might not be too young for the job.

Nevertheless, Weidmann's appointment seems inevitable, because the new Bundesbank president will have to get to work quickly. Merkel doesn't have time for a prolonged search.

Indeed, she will have to focus her attention on damage control in the coming weeks. It is already clear that Weber's departure will hardly bolster German confidence in the euro and the crisis management of Merkel's CDU/FDP coalition. On the contrary, predicts one member of the government, saying: "Now the euro debate will really get underway."

Weber's decision to withdraw from the race for the ECB presidency comes at an awkward time for Merkel. With several important regional elections clogging the 2011 political calendar, Merkel had been hoping to portray herself as the uncompromising savior of the European common currency.