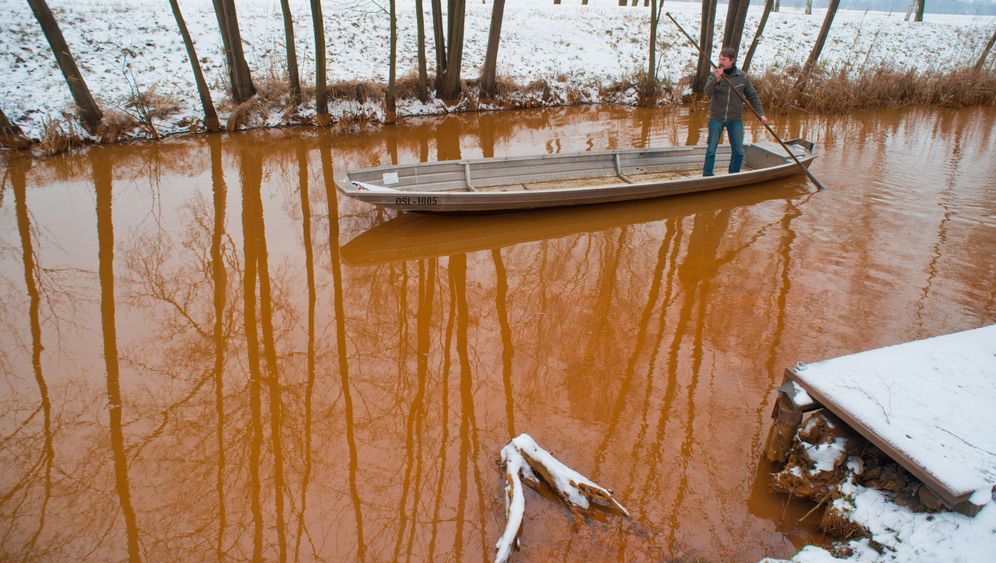 The green club-tailed dragonflies are gone. Isabell Hiekel knows not to look for them anymore along the Wudritz, a tributary of the Spree River in eastern Germany. The majestic Ophiogomphus cecilia was once at home here, growing up to seven centimeters (2.75 inches) long. "They hide their larvae here along the riverbed for four years before they emerge" she says.

The freshwater ecologist works with the activist group Saubere Spree, or Clean Spree, fighting what has become a lethal danger to the rivers around the eastern German state of Brandenburg, just a short distance from Berlin. A fine brown sludge is filling them up, killing the wildlife, from dragonflies to fish and worms.

Now, emergency measures are to be implemented in hopes of saving the Spreewald, a popular tourist attraction and a UNESCO biosphere reserve that features a network of small channels meandering through the forested landscape. Populated by the Slavic Sorbs, it is a deeply traditional region where even the mail is delivered by boat.

The idyllic setting attracts some 1. 6 million overnight guests each year, not to mention countless day-trippers who enjoy the lazy rowboat trips and pickles the region is famous for. "We earn our money with an environment that's intact," says Jana Eitner, who works for tour operator Spreescouts in the small town of Burg.

But the brown slime could endanger many of the 7,700 tourism jobs in the area, which is why activists like Eitner and Hiekel are in a delicate position. Should their warnings grow too loud, tourists might stay away, even though the catastrophic-looking sludge doesn't pose a danger to humans. But if the Spreewald's residents remain silent, the death of the surrounding flora and fauna will continue.

The problem has been of interest to a few scientists and environmentalists for some time now, and the dead zones in the headwaters of the tributaries continue to grow in size. Now that the brown mess has reached the edge of the Spreewald, politicians have suddenly -- and literally -- jumped on board.

The Legacy of Open-Cast Mining

The rust-colored mud results from a chemical compound known as iron (III) oxide-hydroxide, or iron ochre. The fact that it is present in such large quantities here in the rivers and streams of southeast Brandenburg can primarily be attributed to mining. For decades, brown coal has been mined from open pits in the surrounding Lausitz region, both in Brandenburg and Saxony, its neighboring state to the south.

To prevent the massive pits from flooding, the underground water level has been lowered in large areas. Doing so has exposed ferrous compounds to the air, leaving them to rust. When the open-cast mines were shut down, the water level climbed back up, and a particularly rainy last few years have now flushed out large quantities of iron ochre. A study by the IWB Dresden, an institute focused on geophysical and hydrological issues related to mining, posits that the Spree River dumps 6.8 metric tons of iron ochre into the reservoir of the Spremberg Dam alone -- per day.

The Lausitz and Central-German Mining Administration Company (LMBV), a federally owned company, is responsible for dealing with the legacy of mining activities from the era when this region was still part of communist East Germany. The brown river is keeping LMBV spokesman Uwe Steinhuber very busy these days. He just had new flyers printed. "My message is always: Things are still fine in the Spreewald," he says.

Steinhuber also points out what his company is doing to protect the popular tourist region. For example, a mine-water cleaning plant is supposed to go back into operation near the town of Vetschau. The name makes it sound like a large technological device. On closer inspection, though, it looks much more like three little fish pools -- at least to the untrained eye. But plans call for the water of Vetschau's extremely polluted mill channel to start flowing back through this cleaning facility in the near future. The process is slow, however, because the iron ochre in the water has to be allowed to settle at the bottle of the three basins, where it can then be collected.

Steinhuber promises that doing so will bring about "an enormous relief." But first a canal of some 200 meters (650 feet) must be dug for the water, which is supposed to happen in the next few weeks.

'Just at the Beginning of the Problem'

It must be clearly stated that the battle against iron ochre is not a story about environmentalists campaigning against an evil company. In principle, both sides agree that something must urgently be done to counter this lethal muck.

On the other hand, the inhabitants of the Lausitz region need to think about how open-pit mining will be conducted here in the future. The mining fields of Vattenfall, the Swedish energy giant, still contain some 1.3 billion metric tons of coal. Extracting just a portion of that could result in more jobs and at least modest prosperity -- and, of course, give rise to more environmental concerns. By themselves, the current problems with iron ochre could last until the end of the century. On top of that comes pollution from sulfate. "We're just at the beginning of the problem," warns Falkner Schwarz, deputy head of Brandenburg's LAVB anglers' association.

The emergency measures currently being undertaken do nothing to combat the source of the iron ochre and, instead, only somewhat slow its path to the Spree. Among these measures is a loud vehicle standing near the small village of Klein Radden alongside the ochre-colored water of the Wudritz, a Spree tributary. The walking excavator lifts up mud from the bottom of the little river and dumps it out on both banks. Then it moves forward a few meters and repeats the process.

The iron ochre makes the sludge a dirty brown. But the excavator pulls much more than just the legacy of mining out of the Wudritz. When asked whether this brutish operation might cause much damage, Hiekel, the ecologist, pauses to think before shrugging her shoulders and saying that it doesn't matter much seeing that everything in the river is already dead. But, she adds, the river used to be a "genuine highlight," back when the green club-tailed dragonflies were still alive.