The first school lunch that Martha Payne photographed in May consisted of a croquette, a small pizza, a bit of corn and a muffin. The nine-year-old from Scotland gave the meal six out of 10 points for taste on her "food-o-meter" and four out of 10 for healthiness.

Her plan had only been to take a shot in order to show her father that the meal wasn't enough to fill her up, she wrote on her blog. After only a week, Payne had 25,000 hits on her blog, and now hundreds of thousands are reading it.

Whoever looks at the photos will not be surprised by the debate that has been raging in Germany for two weeks about what is actually served to children in school cafeterias. Much more amazing is the fact that it took so long to reach a crisis like the one that has happened in eastern Germany, where more than 11,000 schoolchildren were recently affected by gastrointestinal sickness -- most likely because of what they ate at school.

"We already calculated long ago that an episode like this would happen because the entire system is messed up from beginning to end," says Michael Polster, head of DNSV, an association that advocates healthier school meals in Germany. "Rapidly growing demand is running up against massive cost pressure (and) absurd bureaucracy in an altogether lawless area," he says.

A move by the German government in recent years to push forward an expansion in the number of all-day schools, has prompted explosive growth in the school catering business. Germany has 11 million children attending 45,000 schools, and the number of them being fed at these schools is rising. As a result, the school catering business is becoming highly competitive and growing at an annual rate of 5 percent. Already today, the five largest school catering companies generate combined revenues of some €160 million ($208 million) in the country.

By far the largest of these is the French company Sodexo. Last week, the company and its products quickly fell under suspicion of being at least partially responsible for the mass outbreak of illness in eastern Germany because many of the affected establishments were supplied by its industrial kitchens.

The self-described specialist in "quality of life services" offers an extremely broad range of services, from nursing care to cleaning to catering. The company's global sales are estimated at €18 billion, and its 391,000 employees make it one of the 25 largest employers in the world. The family of company founder Pierre Bellon is believed to be the richest family in France.

After German reunification in 1990, Sodexo made significant investments in its Germany-based operations. The company took over a number of company cafeterias in the states that belonged to the former East Germany, including one in the city of Halle located right next to a former state-owned paint, varnish and flooring plant. To this day, plasticizers are stored in huge tanks in the courtyard near the kitchen, which is surrounded by rat traps. Signs warn about dangers to reproductive health.

The French quickly became sector leaders with rock-bottom prices of €1.55 ($2) per meal and many employees working at dumping wages, according to the NGG union. Today, 65 Sodexo kitchens supply 200,000 daily meals all across Germany.

Questioning of patients and analyses of the supply chain provided indications tracing the cause of the recent epidemic of diarrhea and vomiting to a supplier who provided Sodexo and at least two other catering companies with frozen strawberries from China. The batch involves 44 metric tons of the fruit that were imported into Germany via the port of Hamburg.

According to the findings of a working group composed of state and local officials, "at least 10" of the Sodexo kitchens in eastern Germany had processed and failed to sufficiently heat the frozen strawberries from this delivery. Sodexo describes the episode as a "regrettable isolated case" and says that use of the goods in question was "blocked" after it was announced that the strawberries might be to blame.

Late Friday evening, Sodexo's German operations issued a press release saying that it was "shocked" by the outbreak. The company added that it apologized to all affected children and families and that it hopes that the children have gotten better. In addition to pledging to improve quality control and to take other preventative measures, the company said it would "compensate those affected for the unpleasantness that occurred."

On Tuesday, Germany's center for disease control, the Robert Koch Institute, declared that the contaminated strawberries had been identified and removed, but it also confirmed that one batch of the frozen strawberries had tested positive for the highly contagious norovirus.

Although the source of the current outbreak may have been discovered, the sector's fundamental problem remains the lack of willingness to pay enough for good food. Even Horst de Haan, the head of Sodexo operations in Germany, complains of "enormous price pressure." "The tendering rules call for an agency to accept the cheapest price," he says.

De Hann admits that his company usually offered the lowest bid. But he says that, particularly in eastern German, companies "adapted to the societal situation very early."

Still, that didn't stop his company from joining with other large catering companies in May in boycotting tenders for grade-school lunches in Berlin's Friedrichshain-Kreuzberg district. The suppliers didn't see themselves as capable of cooking at the low prices being offered by Berlin's state government. District officials had previously decided that they weren't going to pay more than €2.10 for school lunches. And that happened even though experts like Ulrike Arens-Azevedo had already been suggesting for a long time that "one cannot cook healthy food over the long term for such low prices." The professor of nutrition at the Hamburg University of Applied Sciences has been studying and criticizing the cost structure of school meals for years. She calls for budgeting at least €3 per meal.

Despite all the declarations of intent, implementing this is apparently difficult. For years, politicians focused on health issues and consumer advocates have been complaining about children being too fat. And teachers' unions and parent associations have continuously demanded establishing cooking courses and more responsibility in dealing with food. But when it comes to setting binding quality standards for school meals, no one claims responsibility for pushing them through.

Granted, the German Nutrition Society (DGE) has already drafted such quality standards, but they have for the most part remained unimplemented. At present, only 29 educational establishments in all of Germany have been certified as meeting DGE standards. Berlin's Ministry for Justice and Consumer Protection, however, stresses that states should be deciding on such standards themselves because they are responsible for school-related issues. Meanwhile, the states point toward their empty coffers -- and shuffle responsibility onto the municipalities or even onto the schools and their operators.

This situation has led to absurd consequences. For example, school children in rich cities, such as Konstanz in the southwestern state of Baden-Württemberg, receive subsidized school lunches that cost roughly €4.50 each, use ingredients from the region and are 40 percent organic. In Gera, on the other hand, a city in the eastern state of Thuringia, meals can't cost more than €2.30, and parents are solely responsible for paying for them.

A Lack of Care

It's no surprise that experts like Sarah Wiener, a celebrity chef who herself supplies food to a day care in Berlin, calls for schools to receive higher food subsidies. "By having meals at such a low culinary level, we cement a taste for industrial food," she says. "We shouldn't put the profit maximization of a sector over the well-being of our children."

Even the catering companies only receive a fraction of the cost of these low-priced meals. In addition to having to pay all of the 19 percent in value-added tax themselves, they are also responsible for energy, transportation and personnel costs. "Maybe 50 cents of the €2 are left to the caterer to pay for the ingredients," says Polster, the head of the DNSV advocacy association. "That already makes one wonder of what kind of quality they are."

A few years ago, the mass-circulation daily Bild had a headline saying "Even Catfood Is Better than Day Care Food" in an article on the quality of school meals in Berlin. The article was prompted by a report saying that school food was kept warm for between four and six hours after being cooked. In addition to destroying the vitamins, having food stand for so long also allows bacteria to multiply.

Still, many parents don't seem to care all that much about such shortcomings or about their children's nutrition at all. For example, a third of all 11- to 15-year-olds already go to school without having had breakfast.

What's more, in the debate over higher prices for school meals, it's not just the parents who are offering resistance and insisting on cheaper alternatives. It's also school officials. In fact, not all school directors seem to realize that they also have something to do with how children are nourished. "I'm constantly meeting directors who in all sincerity say: 'I'm responsible for the head, not the stomach,'" says Polster. 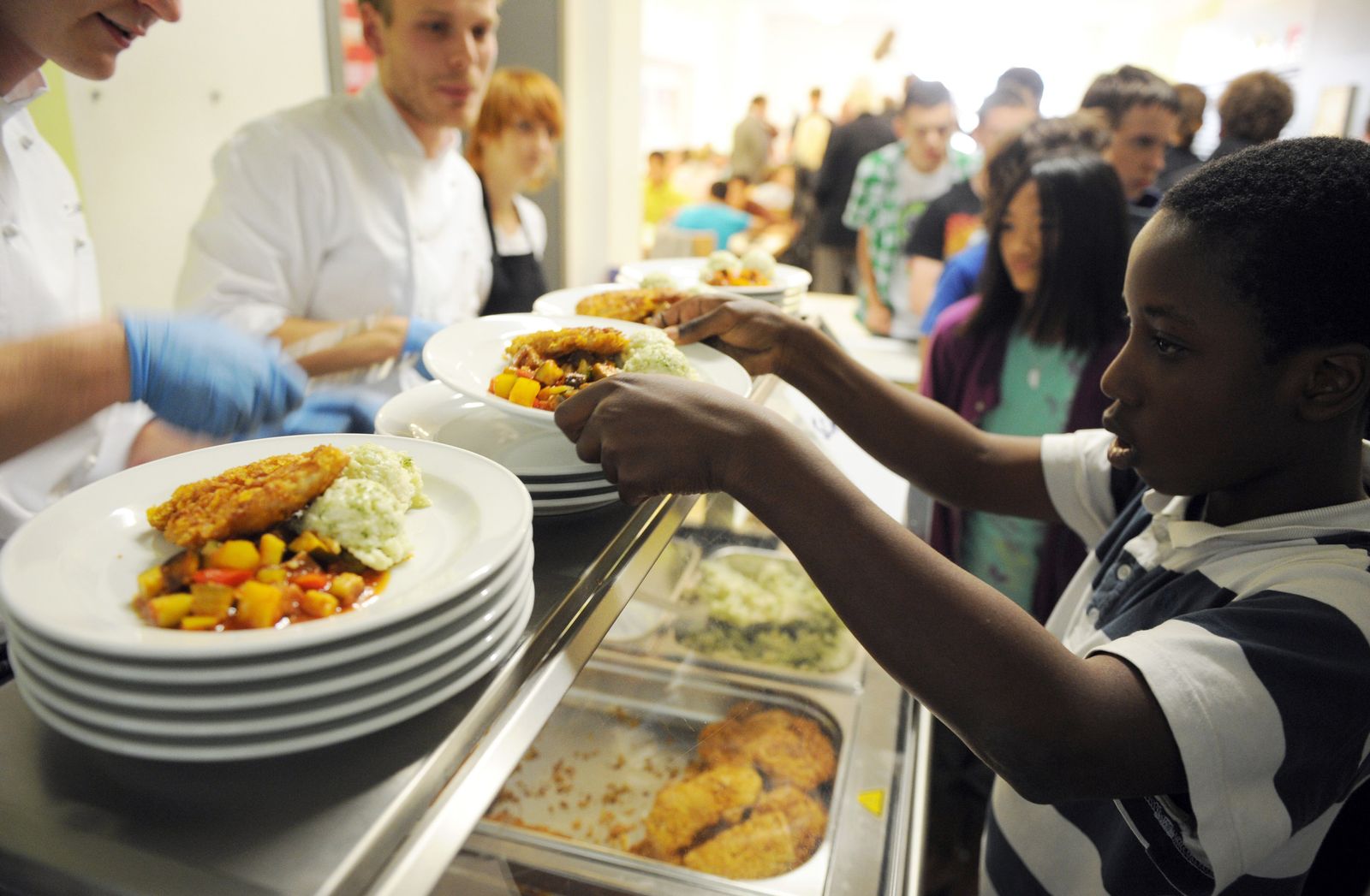 Children line up for school lunches in Hamburg: "Maybe 50 cents of the 2 are left to the caterer to pay for the ingredients."