"So much is written and said about me, with my given name Eric Breininger. The Internet and the media are full of it, but most of it is made up and lies."

So begin the memoirs of Eric Breininger, the German jihadist who was killed by Pakistani soldiers in the border region of Waziristan at the end of April. His autobiography was posted on the Internet on Wednesday.

Right from the first pages, it seems as though Breininger, who went by the name Abdul Gaffar Almani, knew that death was near. "Even as this work is being composed, I am not sure that it will ever be completed, as we find ourselves at war." The appendix, written by a comrade, makes it clear that Breininger worked on his memoirs until just a few days prior to his death.

Breininger called his memoirs "My Path to Jenna," using the Arabic word for "paradise." And it is an impressive document, offering a detailed look into militant jihadism. It is an account of the day-to-day life of radical Islamists fighting in the Hindu Kush and an intimate look at the thoughts of a radical who is certain he is in the right.

Breininger was an associate of the so-called Sauerland Cell, a group of German radicals who plotted to bomb US targets in Germany in 2007. Confessions from that group have provided an excellent source for insights into German jihadists fighting in the border regions of Afghanistan and Pakistan. Breininger's autobiography sheds even more light on their activities and thoughts.

The authenticity of the document has not yet been verified, but there are many indications that it is genuine. It was posted on a well-known Jihadist website and the appendix includes a photo allegedly of Breininger's corpse. Furthermore, the document includes details that could only be known by Breininger and which are partially confirmed by other sources.

Still, there is room for doubt. The text is relatively clean and well-written and includes numerous footnotes -- a departure from the somewhat sloppy style of the propaganda videos Breininger made for the Islamic Jihad Union. German security officials are currently evaluating the text. One possible explanation for the more professional style is that it could have been narrated by Breininger but taken down by a second party. Nevertheless, it is seen as likely that the text originates with the German jihadist -- thus making it a document of great interest for German intelligence.

It is a sweeping document that Breininger has left behind. It starts with his first existential questions as a teenager and his initial meetings with a devout Muslim, who eventually convinced him to convert. It provides a look at his rapid radicalization, his path to the battlefield and his residence in the house occupied by a suicide bomber brigade. It includes scenes from his participation in battles against the "kuffar," the infidels.

"I had only been in Islam for four months," he wrote of the final weeks of his life in Germany in the summer of 2007. "Still, I knew my duty. I wanted to join the jihad.... We followed the events which were unfolding in the regions of jihad and watched films of mujahedeen battling the crusaders.... Hate of the kuffar grew in me," he writes.

By then, Daniel Schneider -- a recently-sentenced member of the Sauerland Cell with whom Breininger briefly lived -- knew the group was under observation. He sent Breininger out of the country, as the new book confirms. The young German visited a language school in Egypt, where he was visited by the German-Lebanese Hussain al-Mallah, who himself had just returned from an unsuccessful trip to the Hindu Kush battlegrounds. He encouraged Breininger, who then travelled himself to Waziristan, ending up in a training camp run by the Islamic Jihad Union.

His descriptions of the training he received are largely similar to those provided by other members of the Sauerland Cell. But he is open about the difficulties he faced. "After a time, I was deeply unhappy because I had nobody to talk to. There was nothing left for me but to stay patient, clench my teeth and complete the training."

Breininger's loneliness resulted in part from the fact that his friend al-Mullah left the IJU shortly after arriving, a detail that was unknown prior to the posting of Breininger's memoirs. Al-Mullah was never mentioned again in the work. The assumption made by German intelligence services that the two friends spent much of the last three years together will now likely have to be revised.

Breininger writes that he was moved out of the suicide bomber house after several months. "These brothers were pearls," the young German writes. Two of his acquaintances had since carried out suicide missions, resulting in, writes Breininger, "a drastic increase in the number of Muslims who want to carry out suicide bombings."

He himself received further training in the use of heavy weapons and took part in "numerous operations," he writes. Some of them merit description, such as an attack on an unidentified "infidel base." "When everything was ready, we waited for the order from Amir and then launched the first rockets. The kuffar attacked us with fighter jets." Fighters from the Taliban and even al-Qaida were fighting alongside Breininger.

Breininger repeatedly indicated that he was lonely, mostly due to the language barrier. "I miss the opportunity to share my thoughts or simply that a brother gives me his support after a difficult day," he writes. He was ecstatic when the IJU head told him that further German jihadists had been trained.

It is here where Breininger solves a riddle that has plagued German intelligence since the fall of 2009, when a group calling itself the German Taliban Mujahedeen first appeared and threatened Germany with attacks. The group of Germans trained by the IJU preferred to fight under the Taliban, leading to Breininger's leaving the IJU and joining them. "The Taliban allowed us to create a sub-group. At the beginning, we were six brothers and founded the German Taliban Mujahedeen.... The group was to provide a home for all German-speaking Muslims who come here from all over the world ... to fight." It is, he claimed, the first German jihad group in the world and has grown steadily, even including "families with children."

Breininger had plans of his own as well. He wanted to become a trainer, he writes. And he wanted to marry -- an Arabic-speaking woman. He writes that it would be good were unmarried women to make their way to the Hindu Kush as there were many single fighters at the front.

'Sow Terror in Their Hearts'

Just how rambling and radical Breininger is, despite his efforts in the book to appear thoughtful, becomes apparent in the last passage of his memoirs. The children present in the group's camp would, he writes, "with Allah's permission," become "a very special group of terrorists that appear in no database or list created by the enemies of Allah. They would speak the language of the enemy, they would know their customs and traditions and because of their appearance could easily disguise themselves and thus easily infiltrate the countries of the kuffar ... where they could carry out one operation after another against the enemies of Allah and sow terror in their hearts."

It marks the end of a long path from a German youth trying to find his way -- one who went to parties, drank alcohol and had a girlfriend. Breininger writes at the beginning of his autobiography, "I lived exactly the kind of life that every young person in the West wants to live. But I couldn't see any meaning."

Despite being full of pseudo-religious passages penned primarily for propaganda purposes, Breininger's memoirs are important for the insight they provide into a world that would otherwise be difficult to understand. But one question remains unanswered: Why the jihad represents an answer to the search for meaning in life. Breininger's death, his comrades write in the appendix, came after being fired on by soldiers. He was hit by several bullets, they write.

The day after the battle, the mujahedeen retrieved his body and laid him to rest. 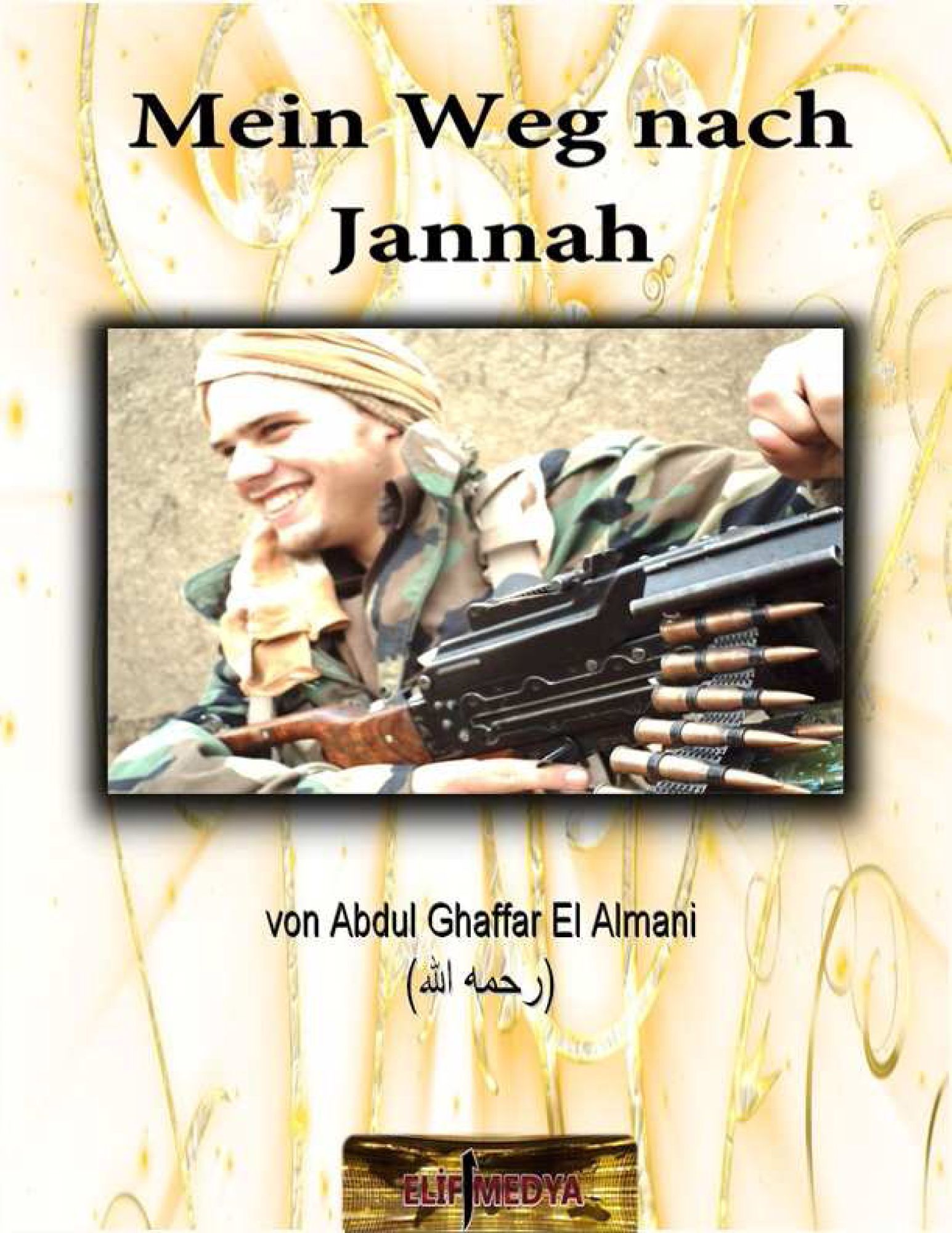 "My Path to Paradise": The cover of a German jihadist's memoirs.