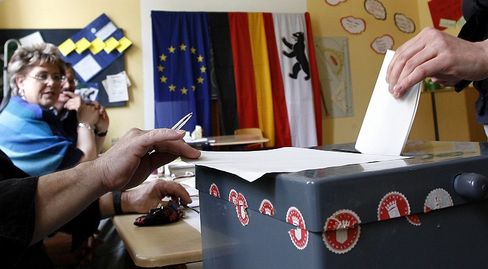 A campaign to allow students to choose between religion and ethics courses failed at the polls in Berlin Sunday.

It was a referendum that dominated discussion in Berlin for weeks: Should school students have a choice between ethics and religion classes, or should ethics continue to be compulsory and religion an optional extra course?

But after the streets had been plastered with posters and the radio waves full of ads, after all the workshops, discussion panels and street-level campaigning, after all the special newspaper sections and all the lining-up of supporters drawn from the world of politics, sports and television, in the end, not enough people showed up at the polls to push the referendum through.

"I'd been hoping for a different result," said Christoph Lehmann, the lawyer who led the "Pro Reli" campaign, which was backed by the Chancellor Angela Merkel and her ruling center-right Christian Democratic Union (CDU) party, the business-friendly Free Democratic Party (FDP) and the churches. Archbishop Robert Zollitch, the head of the Catholic German Bishops Conference, viewed it as a "painful outcome."

If passed, the proposal would have allowed students to choose between ethics and religion courses, which would have seen Islam, Catholicism and Protestantism taught separately.

Berlin has a long secular tradition, and 60 percent of Berliners are not members of any church. In 2006, ethics classes became a compulsory subject for Berlin students between grade 7 and grade 10, with religion being an optional extra class, after the "honor killing" of a Turkish woman murdered by her brother.

The proposal was opposed by Berlin's ruling left-wing parties, the Social Democratic Party (SPD) and the Left Party. The city-state's government argues that all students, regardless of their cultural or ethnic background, should learn a common set of values.

Berlin Mayor Klaus Wowereit pronounced himself pleased with the results of the referendum, telling Reuters: "This shows that those in 'Pro Reli' who were portraying this as a 'freedom' issue -- as if the Russians were about to invade -- are out of touch with the real situation in Berlin."

'Pro Reli' is responding to the loss by accusing the mayor of using his decision-making powers to favor the proposal's opponents. For example, Lehmann is now criticizing city hall for allegedly directing more funding to groups campaigning against the proposal as well as for refusing to hold the referendum on June 7, when Germans would have already been going to the polls for the EU parliamentary vote.