After a tumultuous night at party headquarters in Berlin, Bernd Lucke -- head of Germany's euroskeptic Alternative for Germany (AfD) party -- was up bright and early on Monday morning, doing an interview on the ARD's "Morgenmagazin" breakfast show.

Lucke exuded an air of calm confidence. Though his anti-euro party -- which was only formed in February and calls for an "orderly dismantling of the euro zone" -- did not achieve the 8 percent vote share Lucke had optimistically predicted on Sunday, AfD did come within a hair's breadth of the 5 percent threshold required to take seats in the German parliament, the Bundestag.

"Objectively, a 4.7 percent vote share for a party founded so recently is a highly respectable result," he told the public broadcaster. "We continue to believe that it's important to have a political force that is willing to discuss the common currency and European bailout policies, and this force is the AfD," before adding, "The ball is in our court now and we are ready for it."

Many political commentators breathed a sigh of relief at the party's failure to make it into parliament. Still, even its most forceful critics -- among them some of the country's pollsters, whom Lucke has accused of underrepresenting his party's support -- concede that the election defeat may not be the end of the line for the AfD.

"It's crucial not to underestimate them or to assume that they will simply pass into irrelevance now that the election is over," says Manfred Güllner, head of German polling institute Forsa, who has sparred with Lucke about poll results. "They are not just a single-issue protest party, or else they wouldn't have made it this far. They are a socially acceptable organization with clear right-wing affiliations -- that is an extremely dangerous combination."

The AfD seems to have learned its lesson from the failed Pro DM party -- a right-wing populist organization that emerged in 1990s with the sole intention of preventing the introduction of the euro currency. Pro DM achieved less than 1 percent at the 1998 general election and passed into irrelevance shortly thereafter, largely because of its status as a single-issue party.

Lucke's anti-euro party has made efforts to expand its election manfesto beyond the issue of the euro zone -- and the party has come to occupy a niche previously inhabited by the pro-business Free Democrats (FDP). Research conducted by polling institute Infratest Dimap shows that 330,000 of the anti-euro party's 1,160,000 votes on Sunday came from people previously affiliated with the FDP. "If the FDP had kept the promises it made four years ago, we wouldn't exist," Lucke said in an interview on Sunday.

But the party drew voters from across the political spectrum -- 230,000 AfD voters had previously supported Chancellor Angela Merkel's center-right Christian Democrats and 150,000 their center-left Social Democrat challengers. The fact that the right-wing populists have found resonance with such a broad spectrum of voters is likely to cause a stir among the country's more established players. It's also worth noting that 150,000 AfD voters hadn't voted in the previous elections.

"The spectacular success of the AfD increases the pressure on the mainstream parties to face up to questions [about the future of the European Union]," argued an online commentary in Germany's left-wing Tageszeitung newspaper. "To dismiss them as a party that merely captures voters on the fringes of the political spectrum would not be smart."

Though the anti-euro party's popularity is likely to make waves in the Bundestag, and may even prompt some political parties to rethink their approach to the euro zone, Güllner argues that Merkel's economic policies are unlikely to be affected by it. "The chancellor has such broad support, nothing can deter her from her European path," he says. "The support for the AfD is worrying for German democracy, but that is unlikely to influence Mrs. Merkel."

The AfD may, however, be able to build on its current momentum by launching a campaign to enter the European Parliament in 2014. In Brussels, only 3 percent of votes are required to enter parliament, which may work in Lucke's favor.

Unlike some of Germany's other fringe parties, the AfD will not have to worry about its finances -- it has several private benefactors who are likely to support its anti-euro agenda beyond September 22. "Lucke and his colleagues do have a chance at the European level," says Güllner. "Their financial house is in order and they've got some semi-credible leaders."

But Hajo Funke, political scientist at Berlin's Free University, has his doubts about whether the AfD will be able to establish itself as a credible player in Brussels. "What people seem to forget is that the AfD's approach to the euro is actually rather unsophisticated," he says. "Its economic policies have to be developed and fleshed out if it wants to compete on a European level." 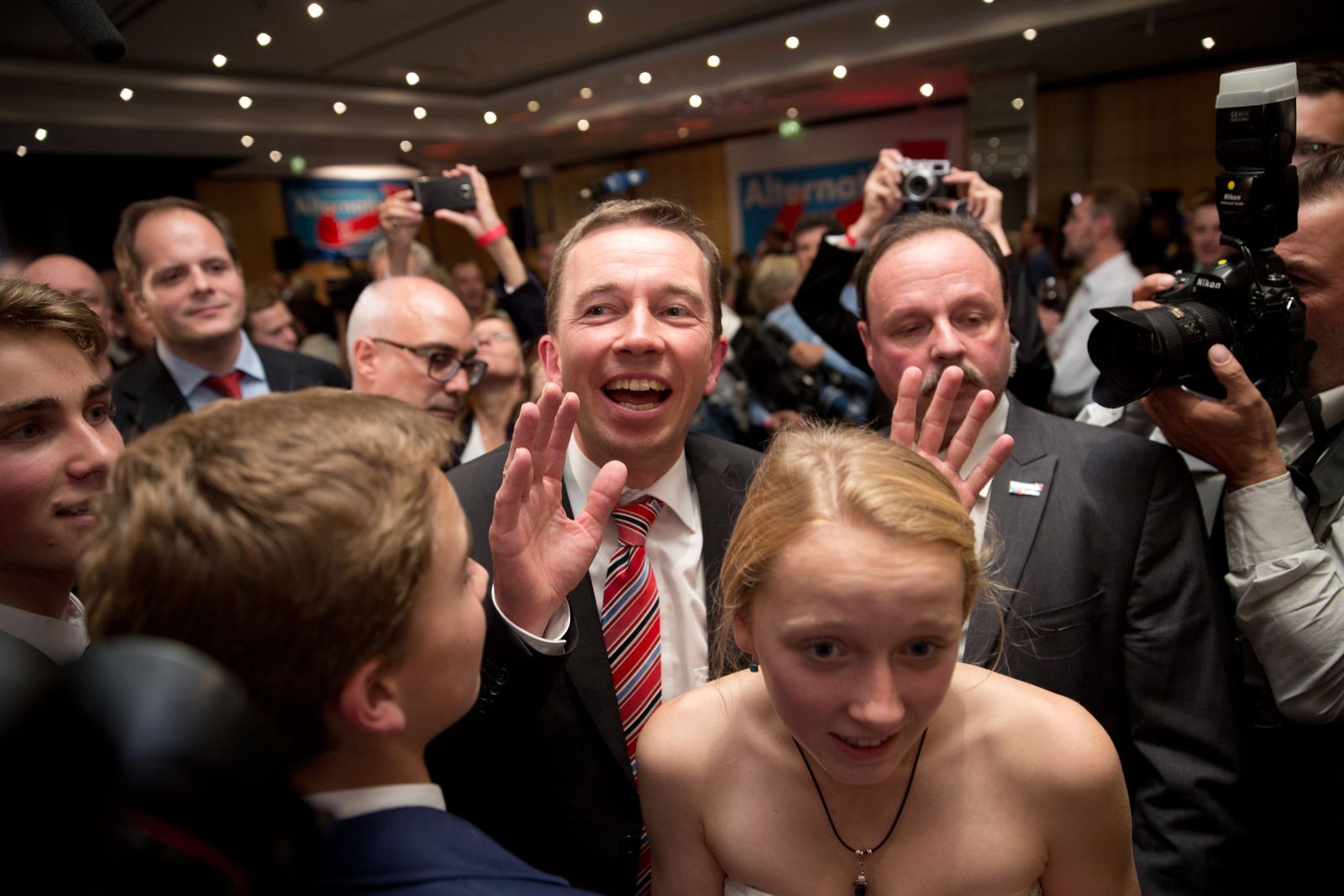 Bernd Lucke, the head of Germany's euroskeptic Alternative for Germany (AfD) party, with his four children at an election party in Berlin.