As founder of the country's euroskeptic party, Bernd Lucke is among the most controversial figures in Germany. His political agenda -- which includes an "orderly dissolution" of the euro, a decentralized European Union and a move towards Swiss-style, direct democracy -- is often met with doubt, and sometimes outright hostility.

Last week, left-wing agitators stormed the stage at an Alternative for Germany (AfD) campaign event, pushing Lucke to the ground and using pepper spray on several campaigners. The attack came as little surprise, though, after a confrontation with Green Youth activists earlier this month prompted the AfD to apply for police protection on its campaign trail.

In its own mind, the AfD is classically liberal in philosophy and otherwise pro-European -- it intentionally avoids labelling itself as left- or right-wing. But the German media, ever vigilant against creeping populism and right-wing extremism, has taken to portraying it as one of several right-wing populist parties eating into Chancellor Angela Merkel's conservative Christian Democratic Union's voter base.

This spring, the Frankfurter Allgemeine Zeitung newspaper ran a piece on the hidden ties between the AfD and members of the right-wing extremist National Democratic Party (NPD). The AfD's stance on Europe, a Berlin NPD official told the paper, was closer to NPD policies "than any other established party in Germany." Other German newspapers have taken a similar line.

Suspicions that the AfD may be moving into right-wing extremist territory were put into question last week, however. An Internet study published by linkfluence -- a Franco-German social media monitoring company -- suggests there is little or no overlap between the AfD's politics and those of the right-wing extremist NPD.

The study, which was overseen by the company's German chief executive Oliver Tabino, consists of two parts: an analysis of AfD and NPD supporters' Facebook "likes," and an evaluation of hyperlinks to and from the AfD's various regional party websites.

The Facebook analysis shows that supporters of the AfD and those of the NPD have little in common. While the former exhibit euroskepticism and a preference for direct democratic principles, their right-wing counterparts prefer pages relating to anti-Islamification, right-wing rock bands and the German military.

The second part of the study yielded similar results. "The AfD supporter base and the right-wing extremist scene are digitally very far removed from one another," says Tabino.

The findings were well-received among AfD sympathizers, with many taking to the Internet to express their relief that the party's centrist status had been established once and for all. According to Tabino, however, the findings are not that straightforward.

"People are interpreting the report according to what they want to hear," he says. "Though the study on the one hand indicates that there is no overlap between the AfD and the NPD, it also shows that the party is attracting right-wing populist, reactionary and neo-Conservative interest."

Indeed, the hyperlink analysis conducted by Tabino shows that right-wing populist websites such as "Politically Incorrect" and "Christliche Mitte" -- which advocate anti-Islamification and tighter controls on immigration from Eastern Europe -- often link to AfD content. According to Tambino, the AfD is viewed in some circles as a legitimate mouthpiece for the right-wing populist cause.

Indeed, the Süddeutsche Zeitung newspaper recently asserted that the AfD was awakening "age-old nationalistic tendencies" in an editorial. "People are badmouthing Europe, neighbors and institutions," it said. "The arrogance, insecurity, resentment and political egotism that originated in 19th century Germany are once again coming to the fore."

A closer look at the AfD websites -- particularly those of its regional chapters -- reveals a certain degree of right-wing populist rhetoric, too. By advocating a break from consensus-oriented politics and decrying political correctness as a burden on free speech, the party is aligning itself with other right-wing populist movements across Europe. The party's Bavarian website, for instance, refers to "the destructive potential of political correctness."

Though Oliver Tabino is cautious in his assertions, he maintains that there could be a link between the AfD and similar movements in other European countries. "We've thought about conducting such a study," he says. "An inquiry into the AfD's affiliations with neo-populist movements in France, Holland and Belgium would yield interesting results." 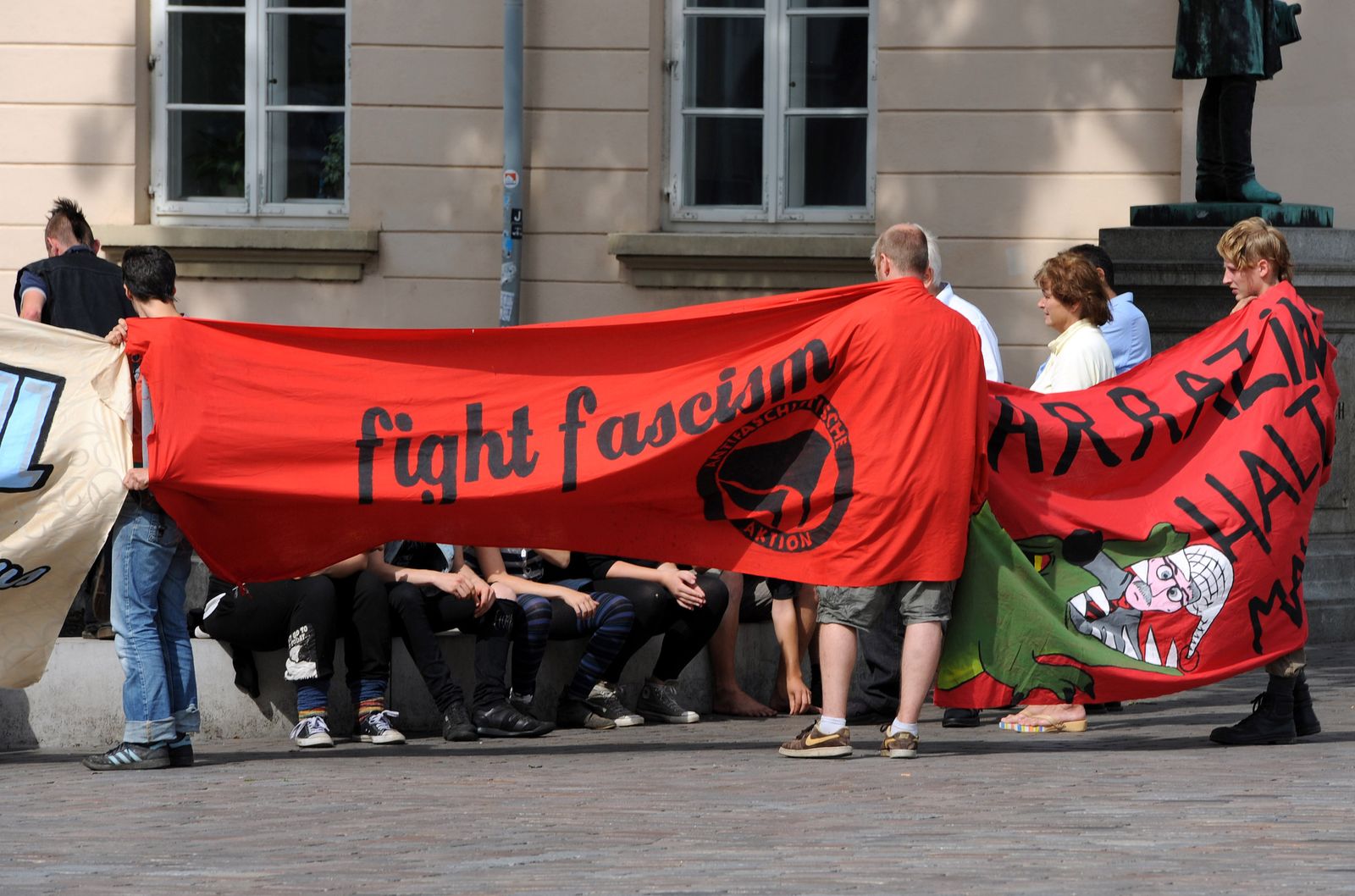 Demonstrators hold up a banner that reads "fight fascism" ahead of a campaign appearance by the head of euroskeptic party Alternative for Germany earlier this month.