The Czech Republic and a group representing those Germans who were expelled from then-Czechoslovakia after World War II -- the Sudeten Germans -- have been working for decades to reconcile their uncomfortable past. But over the Pentecost holiday weekend, the process suffered a serious blow after the two sides exchanged barbs.

During the 62nd annual meeting in the southern German city of Augsburg, Franz Pany, the leader of the Sudeten German organization, effectively demanded that Prague apologize for expelling the ethnic German populace. His comments were not well-received.

During a speech on Saturday, Pany referenced Queen Elizabeth II's historic visit to Ireland last month, where she expressed remorse over the violent past shared between Britain and its close neighbor. "What prevents a republican head of state such as the President of the Czech Republic from expressing something similar to the expelled and disenfranchised Sudeten Germans?" he asked.

But in a statement Czech President Václav Klaus refused to make such a concession, instead accusing Pany of "extraordinary insensitivity" and thoughtlessness, particularly because his remarks fell on the anniversary of the Nazi massacre in the Czech village of Lidice, where some 340 people were brutally murdered in 1942.

Pany's suggestion also sparked heavy criticism among the Czech opposition. Deputy leader of the Social Democrats Michal Hasek called his words on the day of rememberance "effrontery, idiocy" and "provocation." Head of the country's communists, Votjech Filip, called the suggestion the "height of arrogance from this organization," which refuses to grasp "who started the last world war and how the Germans who lived in the former Czechoslovakia took part."

When World War II began, a German minority lived in the Sudetenlad, a region bordering Germany and Austria that Nazi Germany took charge of after the 1938 Munich Agreement. The following year, the Nazis invaded the rest of Czechoslovakia and stayed for the next six years until their defeat. The Czechs then drove out some three million Sudeten Germans in punishment for what was believed to be their part in the brutal occupation. Pany's group, like a similar group made up of descendents of those expelled from present-day Poland, continues to have a troubled relationship with its former homeland.

The conflict overshadowed the meeting of some 20,000 Sudeten Germans, which was otherwise characterized by a more conciliatory tone than events in years past, according to daily the center-left Süddeutsche Zeitung. A spokesperson for the ethnic group, Bernd Posselt, as well as conservative Bavarian state governor Horst Seehofer, had made recognizable attempts to avoid past criticisms and encourage new progress in discussing the displacement of the group with Czech leaders, the paper said.

But the gloves came off after Klaus' comments, with Posselt saying his tone was reminiscent of "the time before 1989," when communism fell in many countries in the region. He also called attention to his visit to Lidice last year, where he laid flowers at a memorial to "make clear how abominable it is that people were murdered there simply because they were Czechs."

Meanwhile, Pany said he was "surprised" by the Czech president's harsh reaction to his remarks, which were made during a speech about Germany's crimes during the war. Klaus' tendency to react negatively to statements by the Sudeten Germans is "sad," he said.

Controversial President of Germany's Federation of Expellees, Erika Steinbach, also criticized the "cold-hearted" reaction by Klaus. "It's not the Sudeten Germans who are unteachable, but the Czech President himself," she said.

Seehofer, whose Christian Social Union relies on the Sudeten German vote, also said he stood behind the group, but pledged further dialogue to improve the relationship between Bavaria and its eastern neighbor. During an upcoming trip to the country, Seehofer intends to visit Lidice and other sites of Nazi atrocities, the Süddeutsche Zeitung reported. 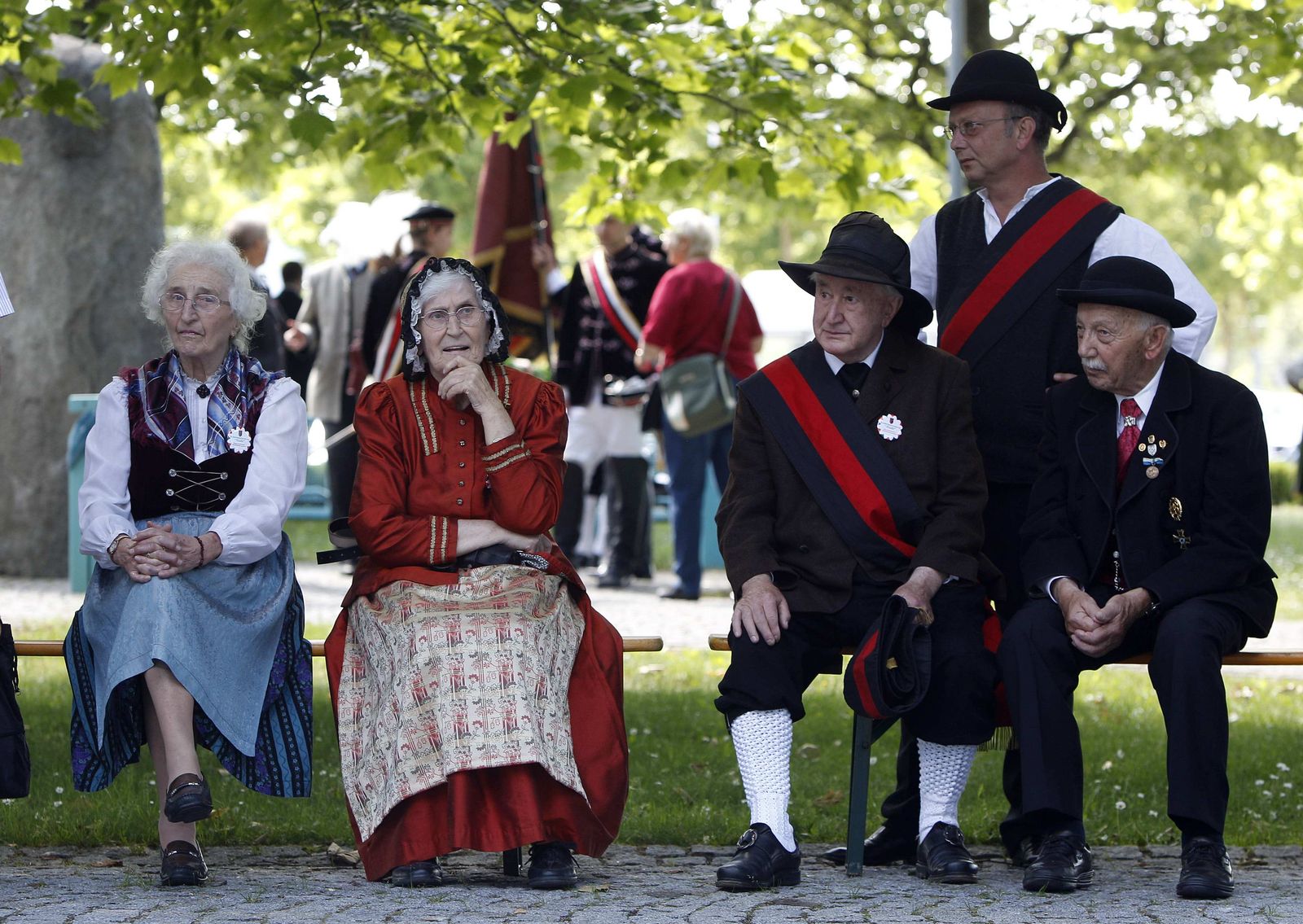 People in traditional dress at the 62nd annual Sudeten German meeting in Augsburg.