Bernd Lucke, head of the Alternative for Germany (AFD) party, is a man of ideas. His suggestions about why Germany should abandon the euro brought his splinter party within a hair's breadth of winning seats in the Bundestag, Germany's parliament. A week after the election, Lucke is putting forward another idea.

The German electoral system, says this newcomer on the political scene, needs to be reformed. Parties falling narrowly short of the 5 percent hurdle required to enter the Bundestag should still be allowed to take seats in parliament, he believes, albeit without voting rights. This new category of parliamentarian, says Lucke, should be given "the right to speak and ask questions, and to take part in committee work." 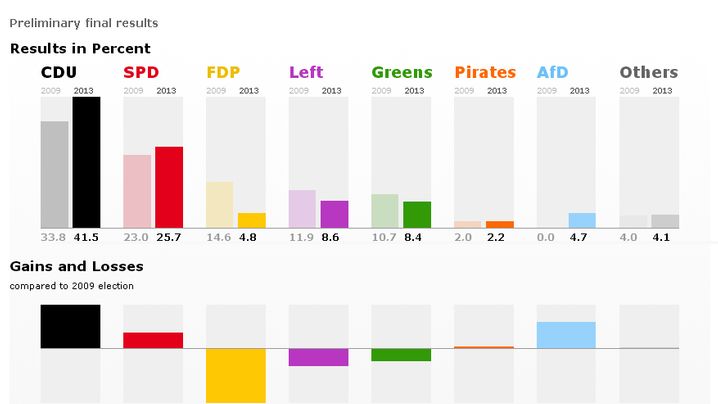 Lucke's proposal is unlikely to resonate with Germany's Constitutional Court, however, which strictly enforces the equal status of all members of parliament. But Lucke is not the only one to criticize the country's electoral laws for excluding parties unable to attract 5 percent of the vote. An increasing number of politicians and constitutional experts are questioning whether the clause -- introduced in reaction to the chaotically fractured party politics of the Weimar Republic -- remains practical in modern-day politics.

Never before in Germany's postwar history has the ruling, which was introduced to ensure the functionality of parliament, created such a democratic deficit. For the first time, two parties -- the AFD and the business-friendly Free Democratic Party (FDP) -- fell narrowly short of the 5 percent hurdle. The result: More votes than ever before will remain unrepresented in parliament.

As a result, 6,855,044 citizens' votes have been lost, making it as if an entire state even larger than Lower Saxony had opted to sit out this election altogether. Put another way, 15.7 percent of votes will not be represented in parliament during this legislative period -- that's a parliamentary group the size of the FDP at its most popular.

Germany is one of several European countries with a 5 percent requirement for parties to enter parliament.

"From a democratic perspective, this is alarming," says the Green Party's Hans-Christian Ströbele, adding that he has always been opposed to the 5 percent hurdle. Many experts on the German electoral system agree that it is unconstitutional for millions of votes to be disregarded. The proportional representation system, which was introduced in 1952, is supposed to guarantee that every vote is equally weighted. If millions of votes simply fall by the wayside, they believe, this egalitarian principle is violated.

The fact that the 5 percent hurdle has remained in place for so long is partly due to the Constitutional Court's fear of "too much" democracy. Its concerns are linked to the fractured party politics of the Weimar Republic and its subsequent downfall, which ushered in the Nazi dictatorship in 1933.

After World War II, there was a strong consensus among Germany's mainstream political players that splinter parties should never again be able to inhibit the formation of a functioning government. The Constitutional Court decided in favor of a 5 percent hurdle, concluding that the democratic deficit created through a potential loss of votes was a small price to pay for democratic stability. The court concluded that a lack of admission control "could result in a failure to form large political parties, which would instead break apart into a vast number of non-functioning splinter groups."

According to Ströbele, however, these concerns are "vastly outdated." Some constitutional experts agree that the court's fears are obsolete and do not warrant the exclusion of such a large number of voters. Dieter Grimm, a former judge and professor of law, says that since Germany has enjoyed "decades of great political stability," the danger of fractured party politics is relatively small.

Grimm also argues that the exclusion of "pesky competitors" could lead to complacency among the estalished political players. "Considering that the most important mobilizing factor in the political system is competition, a lowering of the admission hurdle could promote the openness among political parties that our constitution calls for," he says.

Many experts agree that the 5 percent hurdle is too high. Hanover-based law professor Hans-Peter Schneider, for example, considers "a lowering of the admission requirement to 4 percent constitutionally viable." Ströbele, meanwhile, is making more drastic demands, saying that a 2 or 3 percent hurdle is required to avoid a democratic deficit.

An analysis of election results shows that the majority of splinter groups remain far below the 5 percent hurdle. Of the 30 parties that competed in last month's election, 20 secured significantly less than 1 percent of the vote. A 2 percent threshold, therefore, would have enabled no more than three additional parties -- the AFD, the FDP and the Internet activist Pirate Party -- to win seats in parliament.

In Lucke's view, safety precautions such as the 5 percent hurdle represent an excessive and unconstitutional encroachment on voter rights. He seems to have a point. For example, Speyer-based party critic and constitutional expert Hans Herbert von Arnim thinks there are other, more moderate ways of ensuring the functionality of parliament. Indeed, Constitutional Court judges have acknowledged the fact that changes in the political landscape need to be continually evaluated, and that electoral law should -- if needed -- be adapted to reflect them.

In response to a complaint Armin filed in 2011, the Constitutional Court decided to lift the 5 percent hurdle required to enter the European Parliament after concluding that the danger of fractured party politics did not exist at the European level.

Not the Right Time?

Unlike the Bundestag, the European Parliament is not required to form a government that has to maintain a permanent majority. But are democratic conditions in Berlin really so much more complicated than in Brussels? The German government cannot be removed by parliament, as was the case during the Weimar Republic. Under the current system, the chancellor remains in place until a majority in the Bundestag agrees on a successor.

Despite the criticism, the desire for political stability in Berlin is greater than ever. Heidelberg-based political scientist Dieter Nohlen, an influential election expert, pointedly warns that a change to the parliamentary admission hurdle is not advisable at a time like now, when "solutions for urgent political problems are needed and a grand coalition provides the best conditions," referring to a government made up of the center-right Christian Democrats and the center-left Social Democrats, the two largest parties in Germany.

Indeed, the greater the number of parties represented in parliament, the harder it is to reach consensus. And it only gets harder the smaller those parties are -- and the more they dig their heels in on what is often the only point on their platform.

This is the price that comes with Germany's proportional representation system, which is supposed to represent as many political movements as possible in proportion to their popularity. The system can be dangerous, though: If every interest group, no matter how narrow or self-centered its agenda, were to be represented in parliament, there would not be a force strong enough to assume responsibility for the common good.

It seems that if Germany doesn't want to replace its proportional system with a majoritarian one, the 5 percent hurdle is the lesser of two evils. There should, however, be regulations to ensure that the loss of votes is kept to a minimum. For years now, Chemnitz-based professor of politics Eckhard Jesse has been advocating the introduction of an "additional vote" (Nebenstimme) that would allow voters to choose an alternative party in the event that their first choice doesn't make it into parliament.

Such a ruling would eliminite the state of affairs that voters -- especially supporters of extremist parties -- find so unfair. As things stand, when their chosen party fails to win seats in parliament, other parties -- in some cases those whose policies they strongly oppose -- often benefit. "That is doubly unfair," says Armin, the political pundit. 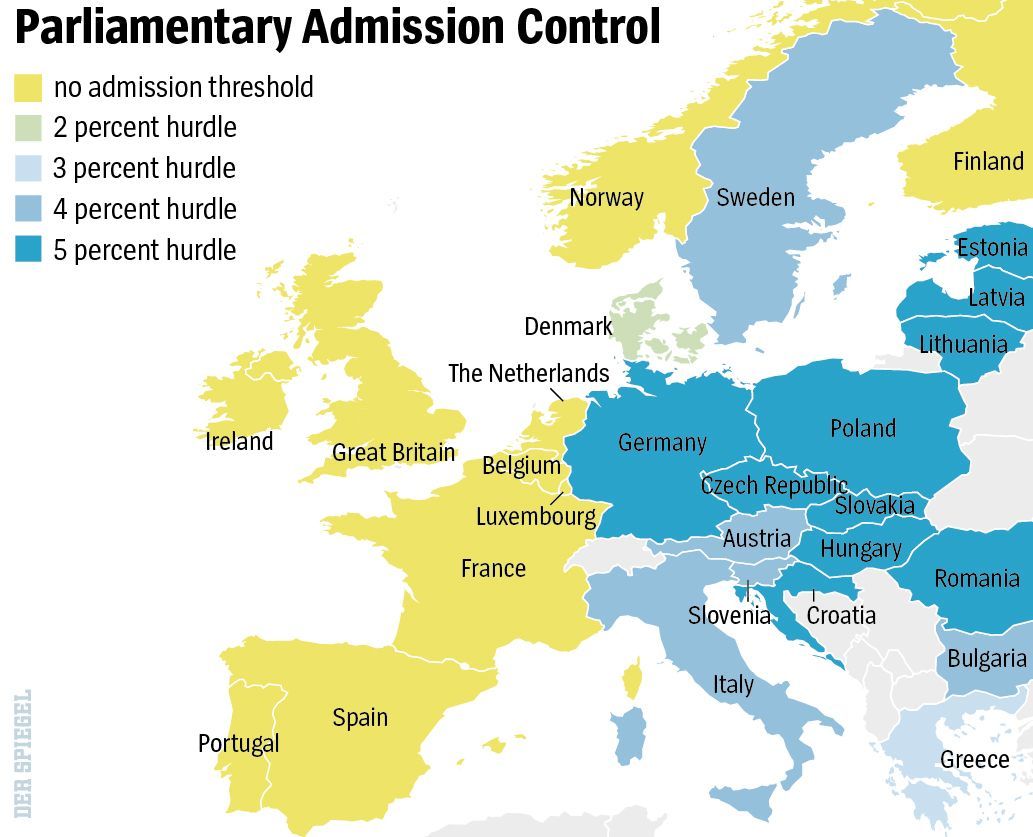 Germany is one of several European countries with a 5 percent requirement for parties to enter parliament.