Hannah is creating a red convertible for herself. The bright teenager painstakingly specifies every detail of the vehicle, line by line, using commands like "car.move(50,0)."

Hannah is not writing an essay. She is working on the code for a vector graphic with the aid of the programming language called EOS. The final product pops up on screen: A block and two dots that together very vaguely resemble a car.

It's a Wednesday afternoon in the computer lab of Kreuzgymnasium secondary school in the eastern German city of Dresden. A dozen eighth-graders are sitting in front of computer monitors, typing, whispering and programming.

The IT class at this school serves as an example for the entire country. These students have been learning how to work with computers since fifth grade. To them, it's just another subject alongside math and biology, supplemented by the usual school standards: Latin, choir, music and drama.

But does programming really need to be taught as a core subject in this modern, fully digitized world? Or is it simply a waste of time, an educational fad with a limited shelf life? The issue is being hotly debated at many schools in Germany.

Josef Kraus doesn't think much of school programming lessons. "The euphoria among parents and teachers about computerized learning has already decreased to more sensible levels," he says.

Kraus has been the president of the German Teachers' Federation for the past 26 years. He opposed the liberalization of spelling and punctuation rules, and he weathered the storm over the troubling results for Germany from the Programme for International Student Assessment (PISA) studies conducted by the Organization for Economic Co-operation and Development (OECD). He is the recipient of an Order of Merit medal, the only federal decoration in Germany, and his opinions carry weight.

"Schoolchildren don't need to know how a typewriter works," he says. "The most important thing is that they can use one."

Educators in Britain see things rather differently. IT lessons are being given a thorough shake-up following an alarming 2012 report by the Royal Society, the country's national academy of science. Experts quoted in the report warn that opposing the teaching of IT skills as part of the core curriculum is akin to transgressing the principle of equal opportunity. They estimate that 9.2 million people in Britain, or fully 15 percent of the population, are "digitally excluded."

The Royal Society therefore recommends that children start learning to program computers in elementary school using simple software, such as Scratch. This, the report says, is the only way to prevent gender bias. In 2001, boys made up 92.5 percent of all the secondary-school students in Britain taking "Computing A-level."

Other countries -- including India, Israel, New Zealand, South Korea and the United States -- have already adopted changes and developed national IT curriculums. Estonia even teaches computer programming beginning in the first grade. In Germany, by contrast, each federal state sets its own standards, mostly without any systematic follow-up research on its effectiveness.

Should IT Be Taught?

"We are in the process of missing out on a desperately needed reform of our system of general education," warns Steffen Friedrich, a professor of the didactics of computer science at Dresden Technical University. Only three of Germany's 16 federal states currently have mandatory computer classes for some grades: Bavaria, Saxony and Mecklenburg-Western Pomerania. Most of the remaining states have skills-based introductory courses in word-processing and Internet usage or broad-based media training, such as using Google Maps in geography classes. Others believe that using notebook computers or replacing traditional blackboards with electronic "Smart Boards" are the best solutions.

Norbert Breier, a professor of education at the University of Hamburg, is furious. "We're currently doing a backward roll in Hamburg," he complains. The schools of the northern city-state have been teaching IT on a par with physics, chemistry and biology between seventh and 10th grade. But now the board of education wants to downgrade computing again, supposedly "due to numerous complaints by teachers, school principals and experts." This has also prompted a pro-computing association to launch a petition against what it calls a "disastrously bad decision" by Hamburg's educational authorities.

It isn't easy for a subject to be made mandatory, and there is good reason for that. If the curriculum is haphazardly altered every few years, the authorities could be accused of bowing to popular pressure in favor of short-lived fads, such as environmental education, violence prevention or ethical lifestyle management. Nevertheless, if society changes, what is taught in schools should also change.

"It's just like a hundred years ago," Breier says. "Back then, German university-track high schools focused on the classics, and education was primarily based on Latin and Greek." People turned their noses up at the thought of teaching math and biology. And Breier has no doubts about what ushered in the breakthrough: "Pressure from industry."

The practical problems are immense, and they form a vicious circle. The duration of the educational period for primary and secondary schooling leading to a university-entrance qualification has been reduced from 13 to 12 years in all but one of Germany's states. This means that there is even less time to spend on all learning subjects. In addition, there is a shortage of qualified IT teachers -- but, or course, this might also partially result from the fact that too few schoolchildren and students are encouraged to learn about IT.

Peter Hubwieser, a professor of computer didactics at Munich Technical University, says Bavaria viewed the problem as an opportunity. When the curriculums for its university-track high schools (Gymnasien) were reworked in the early 2000s, IT was simply introduced as a mandatory subject.

Ten years later, the fruits of this educational adjustment are plain to see in Bavaria: Interest in studying computer science is up, and Hubwieser is training more computer experts than ever before. Bavaria now has more than 600 trained IT teachers in its Gymnasien, though it still needs around 500 more.

"The biggest problem with teaching IT is probably one of our own making," Hubwieser says. He blames a Babel-like confusion among experts about what basic IT education should be in the first place. This can be seen by a survey Hubweiser conducted of more than 1,000 IT teachers. It found that a quarter of educators want classroom teaching to be based on office software, nearly a fifth want the focus to be on programming, more than 10 percent reject programming entirely, and almost half favor a mixed approach. What's more, being an IT educator has several downside, such as not being held in high esteem and having to work many overtime hours because they are responsible for IT maintenance in addition to their teaching load.

At the same time, an international consensus developed long ago about what good IT teaching should focus on: systematically providing a basic foundation for further learning rather than conveying specialist expertise. Chemistry describes the world of matter, biology the world of living beings, and IT the world of information -- whether it involves processing, distributing or storing it.

What Can Be Learned?

Back at the Kreuzgymnasium school in Dresden, Sabine Zuschke is teaching a first-period class. "Even elevators are controlled by computers," she says. "Instead of using a keyboard, data is inputted using the buttons showing the different floors. How does an elevator computer output its results?" The seventh-graders think. "Through light?" a boy guesses. No. After a brief discussion, the solution is found: Elevator computers deliver the results of their calculations by making the motor move the passenger cabin to the correct floor and open the door.

The students' amazed faces show how thinking in computer terms sheds new light on the known world. IT provides tools for thinking, just like long division and the ability to differentiate between direct and indirect speech.

Critics of IT lessons note that office software and programming languages often become quickly outdated. But proponents counter that even if the types of applications change, the basic elements remain the same. For example, they argue that anyone who understands how file-sharing networks work can recognize this peer-to-peer principle in other contexts. What's more, having a grasp of these intellectual tools is also needed if people want to talk in a meaningful way about copyrights, creativity and equality in a digitized world.

And Is School the Right Place ?

There have long been well-developed and internationally recognized teaching concepts based on the so-called "Darmstadt Model." However implementation is slow at both the regional and national level. As a result, schoolchildren who want to learn how to use computers are often left to their own devices.

"I taught myself JavaScript," says Leon Kay, a 10th-grader from Berlin. In school, he learned a little HTML, a language used to build websites. But that wasn't enough for him. Leon wants to develop hearing aids and cardiac pacemakers when he grows up, so he learns about computing after school.

His after-school school is called Codecademy. The New York-based startup offers online interactive courses in programming languages, such as Python and Ruby. More than a million autodidacts have used the service to enhance their computer expertise, including Michael Bloomberg, the multimillionaire mayor of New York City.

However, initiatives like Codecademy often only reach elites, and they certainly can't replace general education in school.

It's now second period at the Kreuzgymnasium, and Sabine Zuschke is explaining the difference between pixel and vector graphics. A picture made up of individual dots (pixels) eventually becomes blurred when you enlarge it. Vector graphics, by contrast, can be enlarged indefinitely because they only define characteristics such as the thickness, color or shape of a line. Mobile phone photos rely on pixels, while satellite navigation systems use vector graphics.

Hannah's red convertible is now finished. A yellow sun shines down on it. She repeatedly checks the 50 or so lines of code that she painstakingly entered character by character. Meanwhile, a group of pupils gathers around Jonathan, a student at a nearby table. He even managed to get his SUV to drive. The teacher considers it a wonderful, successful learning experience. "Many computer games are made in a similar way," she says. "But they are much more complex." 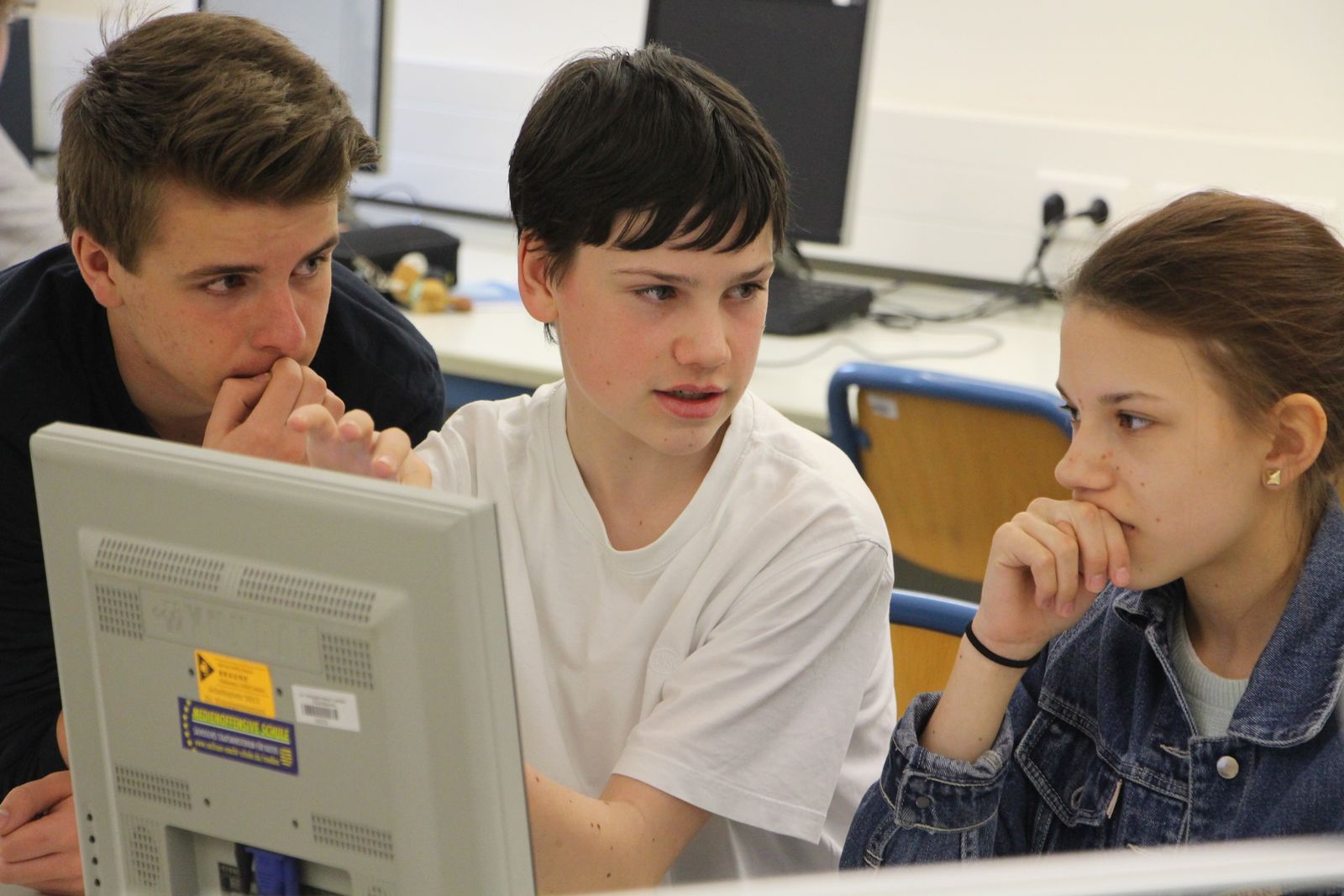