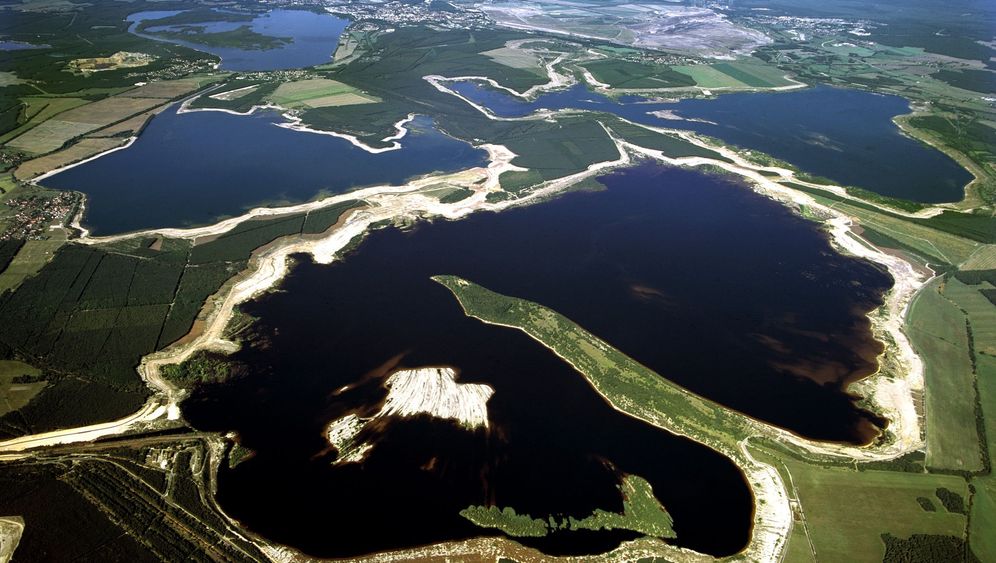 Photo Gallery: Lakes In the Making

What to do if you have a series of gaping hole twice the size of Berlin in your backyard? That unusual conundrum has dogged Germany's Lusatia region for decades.

Not long ago, this was the smoky, dusty powerhouse of communist East Germany. Some 80 villages were razed to make way for brown coal mines with 40,000 people forced to leave their homes. But following reunification, most of the inefficient brown coal mines were abandoned, leaving behind a barren moonscape of massive proportions. Measuring 80 kilometers by 35 kilometers (50 miles by 22 miles), it stretches as far as the eye can see, and beyond.

Now, belatedly, the region has embarked on a dramatic and costly project to revamp the derelict and deeply scarred landscape. Vast craters, left behind by the coal mines, are being filled with water, creating a brand new lake district, the biggest of its kind in Europe. Brochures show pristine waterways, neat cycle paths and happy holiday makers. This, it is hoped, will be Lusatia's future. Holiday heaven, so the plan goes, will fill the void left by coal -- and will boost the local economy, which is still in the doldrums some 20 years after reunification.

"When I arrived in Grossräschen, I found it all pretty ugly," Rolf Kuhn, head of the project, told SPIEGEL ONLINE, referring to a small town in the region. "Buildings were run down and people were pessimistic. But now that has all changed. I don't know of any other place which has altered so dramatically in the past decade."

The change Kuhn is referring to involves, for the most part, gradually channelling rivers into the leftover craters with several lakes having already been filled to the brim. But others are far from complete. Over the next five years, 23 lakes, some joined by canals, are to be conjured up, forming a haven for water-sport fans and cyclists. And locals, who used to take pains to avoid the ugly post-industrial pits, will now be able to sun themselves where they once toiled.

In the meantime, tourism of another sort is underway. Visitors from across Germany and further afield are making a detour to witness the changing face of Lusatia first hand.

Kuhn is overseeing what he somewhat understatedly calls a "unique transition" from an office on the brink of one half-filled crater. A former director of the influential Bauhaus design school, the project he now leads is a so-called international building exhibition (IBA), essentially a financial instrument used for large-scale city and regional planning projects. And, with a budget of some €9 billion ($11.7 billion) in national and state funds, along with €30 million from the European Union, the project is nothing if not massive.

It is also proving to be immensely popular among the once-skeptical locals. "Many of those who were expelled from their villages are happy that they don't have to live with the moonscape for much longer," said Karin Mietke, one of a number of local entrepreneurs who have invested in the region.

Mietke created the new lake district's first floating house and has plans to create a floating holiday village. But her business interests in the lake district were primarily personal. As a child, her husband was uprooted when his family's home village, Gross Partwitz, was demolished to make way for the mines. Now, he wants to be involved in the reincarnation of his former hometown.

The fruit of their efforts is a minimalist wooden house atop Lake Parwitzer, a vast semi-filled basin named after the village which once stood there. Other businesses are also getting into gear. There's a floating diving school and alongside one crater sits a new hotel named with foresight See Hotel (Lake Hotel).

Similarly, in nearby Scado, the region's second floating house project is taking shape. Two slick steel houses have already been launched onto the large man-made lake. Its creators, a local firm called SteelTec37, aims to build a flock of similar models. The space-age construction is on the market for more than €400,000 -- a hefty price tag for the depressed region. No buyer has yet been found, but the rental business is brisk.

Indeed, it could be some time before buyers flock to the lakes. Currently the region, some 150 kilometers (94 miles) south of Berlin, is in a state of limbo with its final completion date set for 2015.

And it is not just the entrepreneurs who are waiting to see whether the lake district will take off. Locals and politicians hope that an influx of visitors will create tourist-sector jobs offsetting the region's unemployment, which stands at more than 15 percent. It could provide a new direction for Lusatia, which for years has been losing young people as they go elsewhere in search of work.

Those working on the project know that simply having lakes is not enough to pull the crowds. "We need more than water and villages. There are already plenty of lake districts around," said Kuhn. "To draw people from Berlin, Dresden and Prague we need to have more on offer, something special."

That special ingredient, according to Kuhn, comes thanks to the area's mining heritage. Unlike most verdant lake districts, Lusatia, called Lausitz in German, is dotted with giant rusty remnants of open-cast mining which dominated the area for 150 years. Whereas locals often recoiled from the landmarks, seeing them as eyesores loaded with bad memories, Kuhn stepped in to save them.

The move did not make Kuhn popular at first. Now, though, local tourist attractions include the long-derelict Plessa power station which has found a new life hosting art events. Not far away is a lookout post atop the massive wastewater treatment facilities belonging to the former coking plant in Lauchhammer.

"For many that came as a shock," Kuhn said. "Many people had lived with the stinking facilities for years and wanted them gone."

By far the leading tourist attraction in the region is also a dormant post-industrial giant. The overburden conveyor bridge F60 looks something like an Eiffel tower laid flat on the ground. Measuring 500 meters in length, it once munched enormous gashes into the landscape. These days, it provides a viewing platform for tourists.

A Boat in the Garden

Former mine workers lead tour groups in yellow hard hats around the site, telling them how it was before ice cream and F60-souvenir beer were on sale at the gift shop.

Yet even as the industrial landscape is being repackaged for tourists, the region's brown coal industry remains active. There are five working opencast mines in the area and the mine at Welzow even has a huge excavator, just like the F60, grinding away at the landscape creating yet more craters.

The Lusatia region is not the first in Germany to use its grimy post-industrial buildings as a selling point. North Duisburg Landscape Park was among the trendsetters when, back in 1990, the abandoned coal and steel production plant was transformed into a place where visitors could rock climb, and even scuba dive, amid bulky reminders of the area's recent industrial past. The Ruhr region, which this year was crowned as European Capital of Culture, has the striking metal form of the Zeche Zollverein on many of its tourist adverts. The former coal mine, built in the 1930s in Bauhaus style, is now a renowned cultural center.

But it is Lusatia lake district's dramatic dimensions which make it stand out. And, as IBA director Kuhn points out, its increasing charm. Indeed, he plans to continue living in the lakescape-to-be, even when his 10-year project ends later this year. "After all, this place is a one-off," he said.

His boat is already parked in the garden, ready for when the lake is completely filled.