"Germany is in serious danger of being overrun by foreigners." It's a sentence one would expect to find on an election poster for Germany's far-right NPD party. As it happens, it's a view that is held by over one-third of the German population -- a new survey has revealed that 35.6 percent of Germans agree with the statement.

Additionally, more than 30 percent think that "foreigners come to take advantage of the welfare state" and that when jobs are scarce foreigners should be sent "back to their own country." More than one-tenth would like a "Führer" -- the survey deliberately used the German word for "leader" that is associated with Adolf Hitler -- who would govern the country "with a firm hand" for the benefit of all.

These are some of the findings of a new study on right-wing attitudes that was presented on Wednesday in Berlin by the Friedrich Ebert Foundation, a think tank linked to the center-left Social Democrats. A quarter of Germans agreed with statements that included xenophobic content. "We've detected a rise in decidedly anti-democratic and racist attitudes in 2010," said the researchers, describing the results of their survey of 2,500 randomly selected people.

Two years ago, when the survey was last carried out, results showed a slight decrease in anti-democratic tendencies, exaggerated nationalism and xenophobia -- at least in the former West Germany. The researchers did, however, note that the study was conducted during a period of sustained economic growth. Since then, the world has been hit by an economic crisis. The result is an increase in right-wing attitudes that the academics described as "possibly a trend reversal."

One thing hasn't changed. Contrary to what the term far-right suggests, right-wing extremist attitudes don't only exist on the fringes of politics, but are also found in the political center, "in all social groups and in all age groups, regardless of employment status, educational level or gender." These attitudes have even been detected among groups that traditionally classify themselves as left-wing, such as trade unions and the Social Democrats.

Those at the traditional center of society are also those who are losing faith in the political system because of the financial crisis -- and are becoming more prone to extreme views. Six different characteristic right-wing extremist views were identified in the study, and participants were asked three questions about each one:

Some significant changes were made in comparison to the previous survey. For the first time, the pollsters asked whether the practice of Islam should be significantly restricted in Germany. A total of 58.4 percent of respondents said that it should be, even though such a restriction would violate Germany's constitution, which guarantees freedom of religion. There was a difference between responses from the east and west of Germany. In western Germany, 53.9 percent thought Muslim religious practice should be restricted, while in the east, 75.7 percent felt it should be -- even though there are far fewer Muslims living in the states of the former East Germany.

What is particularly pertinent is that 55.5 percent of respondents who tended to otherwise reject right-wing extremist statements agreed with the statement on the practice of Islam. The study's authors characterized this as a "modern racism," which is based on cultural differences rather than on supposed genetic differences.

Just over 55 percent of respondents agreed with the statement "I can fully understand why some people find Arabs unpleasant," a result that was about the same in the east and the west. Again, over half of respondents that agreed with that statement tended to disagree with traditional right-wing extremist views. The researchers warn that right-wing extremist parties or right-wing populists could exploit this kind of resentment for political gains.

The answers painted a bleak picture: More than 90 percent of respondents felt it was useless to become involved in politics and 39.1 percent said they did not feel "safe and comfortable" in their immediate surroundings.

Nonetheless, over 90 percent of respondents in both the east and west of Germany believed in the idea of democracy. When they were asked about democracy as it is anchored in the German constitution, however, the level of support fell to 73.6 percent. Additionally, only 46.1 percent said they liked the way that democracy functioned in Germany.

The researchers considered those people who agreed with extreme right-wing attitudes in every area of the poll to have a "unified right-wing worldview." The number of people with that kind of worldview was higher in eastern Germany: In the east, 10.5 percent of the population were classified as having a unified right-wing worldview, compared to 7.6 percent in the west. Nationally the figure was 8.6 percent. That percentage has remained fairly constant since 2002, at just under 10 percent.

The authors of the study expressly warn against seeing the relatively small number of voters who vote for right-wing extremist political parties in Germany as cause for complacency or as counterevidence that contradicts the results of their study. That was precisely the argument used against the researchers by some conservative newspapers back in 2006, when the academics first made the claim that right-wing extremist attitudes had penetrated into the heart of German society.

It seems that the authors may even have erred on the conservative side when they came up with the figure for the number of people with a far-right worldview, as the number of people endorsing one anti-Semitic statement showed. Some 17.2 percent of respondents agreed with the statement: "Even today, Jews have too much influence." 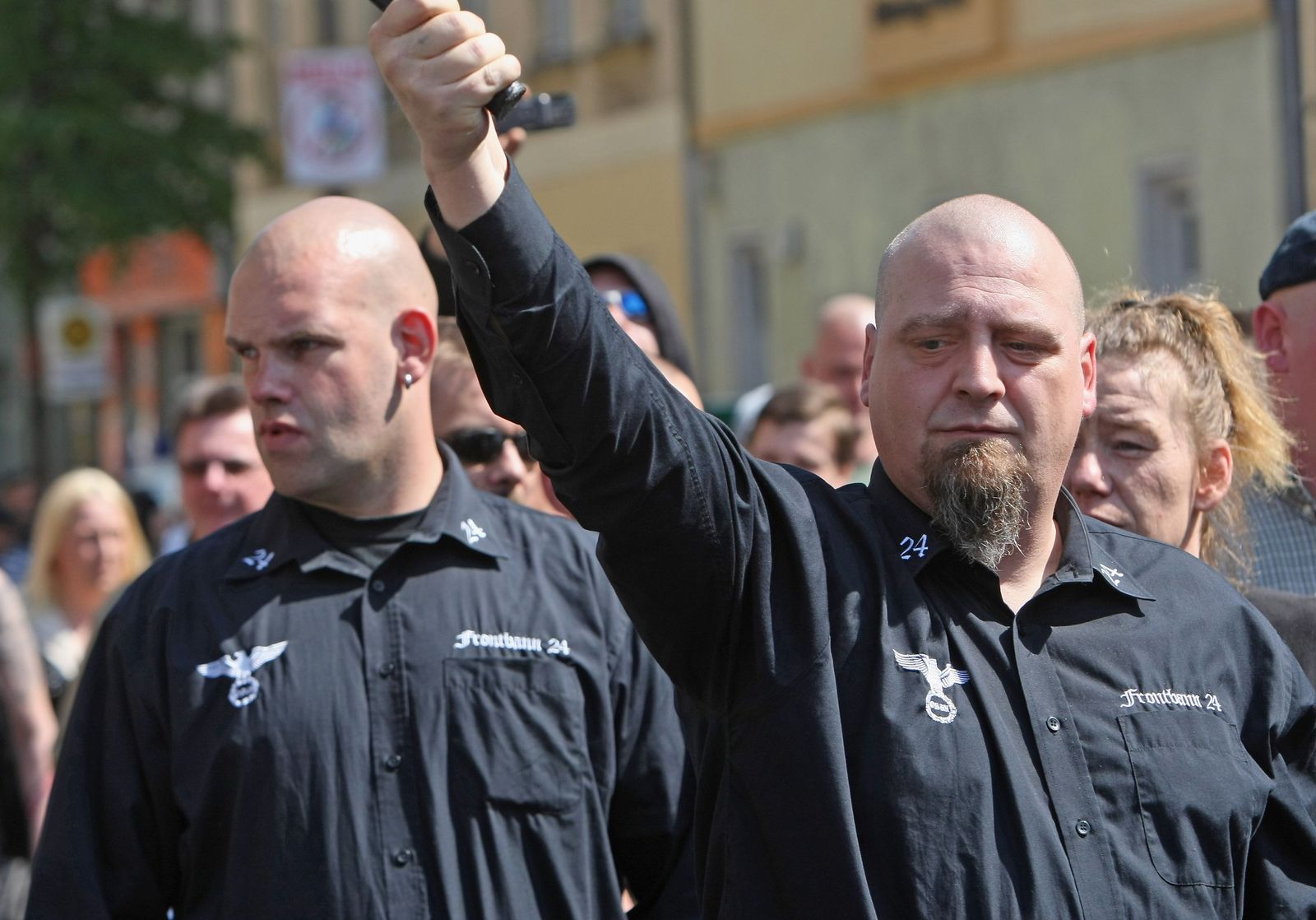 Supporters of the right-wing extremist party NPD at a May Day demonstration in Berlin in 2009.