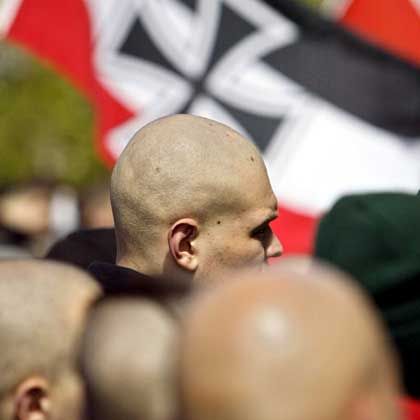 Neo-Nazis have become a lasting problem in some parts of Eastern Germany.

It was a perfect afternoon to go to the lake. Finally, after weeks of cold and rain, Germany on the weekend was bathed in warm sunlight. A Sunday at the water was just the thing.

But day-trippers relaxing by the Krakower See in the Eastern German state of Mecklenburg-Western Pomerania got a bit more than they bargained for on Sunday. A horde of right-wing extremists arrived on the scene shouting racist slogans, making the banned Hitler salute -- and shooting a submachine gun into the air. Beach bathers were terrified by the seeming invasion.

According to the police, six men and one woman drove to the lake in a pick-up truck where they yelled racists slogans and verbally abused the families bathing there, most of whom were ethnic Germans who had moved to Germany from Eastern Europe following the collapse of communism. Such immigrants, many of whom speak only poor German despite their background, are often targeted by right-wing radicals.

The extremists some of whom were drunk, then shot a submachine gun into the air at least 17 times, according to the police. The ordeal only came to an end when a few of the men at the beach succeeded in overpowering the neo-Nazis and holding them down until the police arrived.

The seven suspects, who range in age from 21 to 29, were charged with breaking firearms law and making the banned Hitler salute.

The state of Mecklenburg-Western Pomerania is something of a stronghold for the extreme right. Germany's far-right National Democratic Party (NPD) won 7.3 percent in elections there in September 2006, crossing the 5 percent threshold and securing six seats in the state legislature. And there has been a number of incidents of neo-Nazis insulting or attacking holiday-makers in the state in recent years.