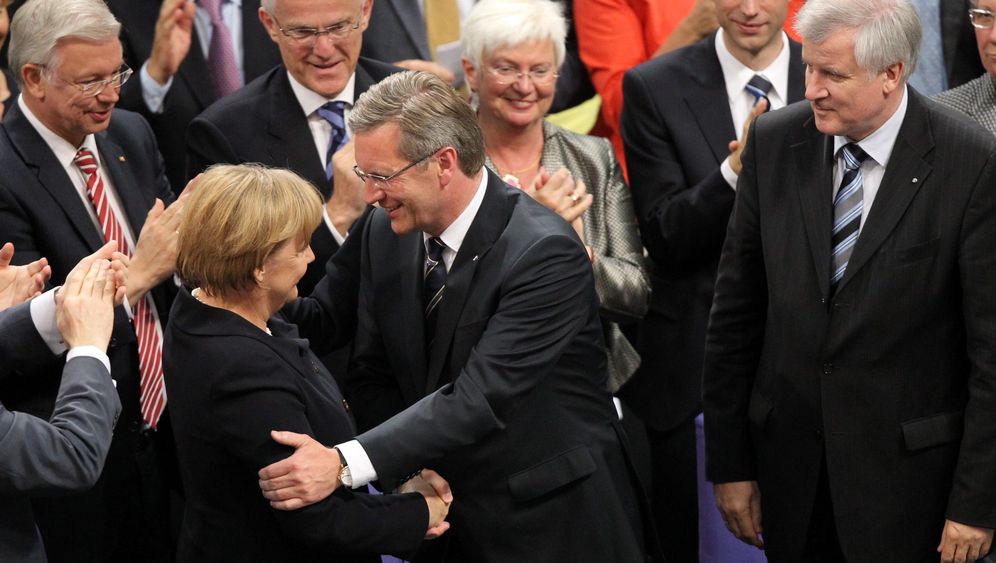 He considers himself to be a "gentle and peaceable" man. He has never, he says, wanted to become an "alpha dog." Should one call him vociferous, he would be insulted.

Even if one doesn't completely believe him, it is easy to imagine how difficult this day must have been for Christian Wulff, Germany's new president.

Wulff was elected by the Federal Assembly in Berlin as the country's 10th postwar president -- but instead of being a relaxed, peaceful day of summer celebration in the German capital, it turned into a disaster. In the first round of elections, Wulff failed to get the required absolute majority, even though Chancellor Angela Merkel's coalition, which chose him as their candidate, had more than enough votes.

It was the same story in the second round. It was only in the third round, late on Wednesday evening, that enough of the gathered delegates finally threw their support behind Christian Wulff.

It was exactly the kind of result that Wulff and Merkel had been hoping to avoid.

The Need to Convince Skeptics

Wulff, at age 51, has become the youngest president in the six-decade history of the Federal Republic of Germany. And he will have to immediately prove his worthiness. He will have to show that he can rise above the conflict surrounding his election. He will have to build bridges and fill in trenches. And, unusually, much of that repair work will have to be done in the coalition that nominated him.

Chancellor Merkel's conservatives, together with their coalition partners from the pro-business Free Democrats, had a comfortable majority in the Federal Assembly on Wednesday. But many of them -- too many of them -- found the opposition candidate, Joachim Gauck, more attractive than Wulff. Wulff will now have to win them over. And he will have to convince at least half of Germany's citizens as well.

Complicating his task is the fact that the position he has been chosen for comes with little in the way of power. It is a largely ceremonial position, one that is supposed to be above the political fray. But Wednesday's spectacle was all about politics -- and Wulff's reputation as a product of the Christian Democratic political machinery will make his undertaking all the more difficult. Everyone can see that his election was ultimately only made possible by cold, hard politics.

Chancellor Merkel chose Wulff, an erstwhile rival, herself. Many saw him as a potential chancellor candidate should Merkel stumble. She praised him as a "wonderful future president" and, in reference to Wulff's children, she emphasized how "great" it would be when a smiling child "is running though the presidential residence even in times of difficulty."

The chancellor had in fact made a risky bet. If she had got her candidate elected smoothly in the Federal Assembly, it would have proven her leadership and stabilized her shaky coalition government.

Now the opposite is the case.

Merkel hit on the idea of Wulff, who himself had been looking for a new challenge for some time. Everyone around him knew that he no longer felt sufficiently stretched in his job of governor of the state of Lower Saxony. "Christian has been looking for a springboard to Berlin for a long time," commented one long-time companion.

But what was Wulff supposed to do? Wait until Merkel's chancellorship came to a premature end? Years earlier, Wulff had, somewhat disingenuously, said in interviews that he lacked "the unconditional thirst for power and the willingness to subordinate everything else to that drive." He rejected the idea of an overly aggressive approach in his quest for more power. Then, German President Horst Köhler resigned, and Wulff saw a new chance. His interests were suddenly identical with those of Merkel.

The two politicians' calculating motives were clear to everyone. In the last few weeks, that fact had already led to a difficult situation for the chancellor and her candidate. The candidate put forward by the opposition Social Democrats and Greens, Joachim Gauck, had a moving and impressive past as a former civil rights activist in East Germany, who later became the government's commissioner in charge of the Stasi archives. The contrast with the career politician was all too stark.

SPD leader Sigmar Gabriel said mockingly that Gauck brought "a life" with him to his candidacy, but Wulff only had "a political career" behind him. The remark hit Wulff hard.

Suddenly Wulff felt branded as a typical party man who was responsible for all the excesses of the partisan political system. But the accusation that Gabriel leveled at Wulff could just as easily have been hurled at Gabriel himself.

In recent weeks, the stereotype of the slick political careerist has caused many people to forget that Christian Wulff himself did not have an easy time of it in his personal life. When he was just a young boy he had to care for his sick mother, because first his father and then his stepfather abandoned the family. For him, the CDU was something like a second home.

He joined the party at the age of 15. When he was 18 he managed to become leader of its youth wing. In 1994, when he was only 34, he challenged the incumbent Gerhard Schröder for the position of Lower Saxony governor, but was unsuccessful. He tried again in 1998, and failed again. Schröder then became German chancellor. Wulff ran for the Lower Saxony governorship for a third time in 2003, this time against Sigmar Gabriel, who had taken over as governor in 1999. This time, Wulff was successful. He won a second term in 2008.

He rarely had problems as governor and enjoyed the role of father figure. He did get into some trouble once when, earlier this year, he accepted a free upgrade to business class when his family was flying away on their Christmas vacation, something which was technically illegal for him as a German state governor. But he promptly paid the difference.

Recently he had something of a coup that saw him celebrated abroad as well as at home, when he appointed Aygül Özkan as Germany's first state-level minister with a Turkish background. It was a sign of a more open CDU.

'Ready for the Future'

Wulff was once seen as one of the party's wild young men. Now he is a moderate conservative who stands for market liberalism.

The former image of being boring that he was burdened with while in opposition was banished as soon as he became Lower Saxony governor. Now he has to create a new image again.

He started during the presidential election campaign. He told the mass-circulation Bild am Sonntag newspaper that he wanted to set up a play area for his two-year-old son Linus in the corner of his office at Bellevue Palace. "I like to have my children around me," he said. "The noise of children is the music of the future, and where people work there should also be a place for children." In addition, he said he wants his official residence to become a kind of think tank. Academics, politicians, "artists and clever people" should come there to help make the country "modern and ready for the future."

The man, it seems, is already thinking in historical terms. "Just think of Frederick the Great and his adviser Voltaire," he said. "Goethe was a minister and Wilhelm von Humboldt was a Prussian civil servant." 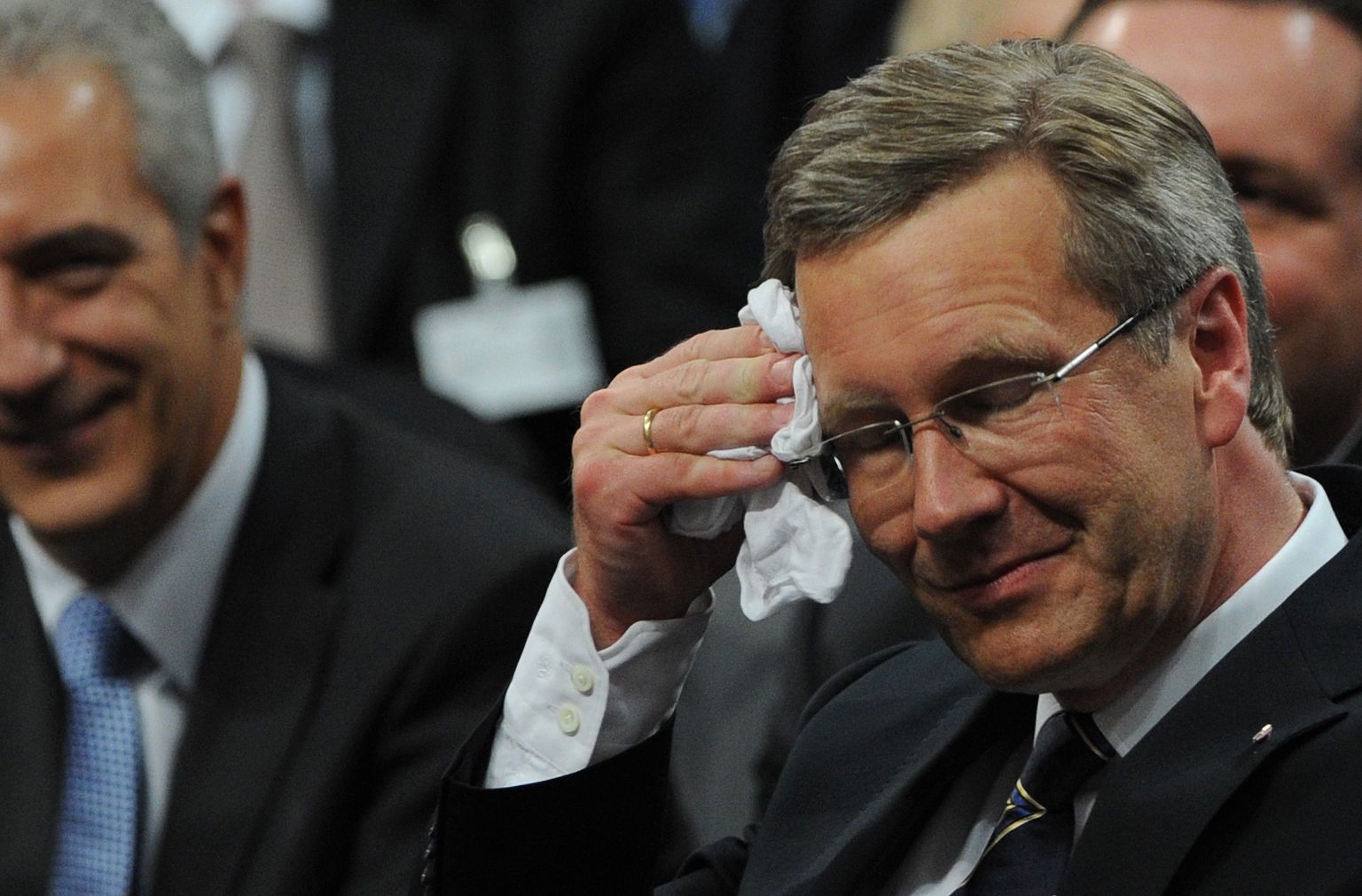 Wulff wiped his brow after the results of third round of voting were announced.