German Family Minister Ursula von der Leyen is struggling to pass a new law designed to combat online child pornography in the face of widespread concern over censorship and freedom of speech. The law would use blacklists to bar access to specific sites. 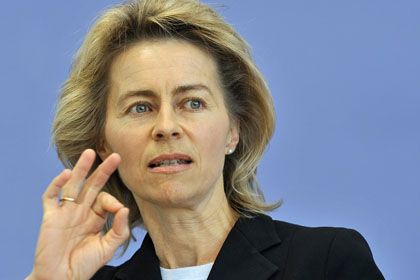 Von der Leyen proposes setting up an office in the Federal Office of Criminal Investigation to determine whether or not sites should be blocked. Lists would then be sent to Internet service providers, which would be responsible for blocking the content.

The list would contain an estimated 1,500 sites. Von der Leyen says blocking them could derail 450,000 hits a day. The personal data and ISP addresses of people trying to access blocked sites would not be captured.

The family minister has long been an advocate of legal controls over Internet sites that distribute child pornography. "My goal is to combat child abuse at all levels, including pictures on the Internet," von der Leyen said in an interview with SPIEGEL ONLINE. "So-called 'access blocking' is just part of our overall plan to fight child pornography at all levels."

The bill would be the first time in the history of post-war Germany that police would be granted the authority to determine what can and cannot be shown by the mass media. Right now, the legislation doesn't call for any supervision of the proposed agency.

Opponents of the bill say the proposal threatens the freedom of the Internet, and that blocks on Web sites and other censorship measures are easily bypassed and ineffective. Thus far, almost 100,000 people have signed a petition against the measure, twice what the law requires to force a discussion in German parliament. One fear is that the list, once established, could be used to censor other sites. Opponents also argue that blocking Web sites is ineffective against child pornographers, who tend to distribute material through e-mail, peer-to-peer systems and chatrooms, all of which are much harder to police.

Social Democratic parliamentarian Gregor Amann said on Wednesday that he doubted the bill would succeed due to concerns over its threats to personal freedoms. "Since I know many of my colleagues in the SPD share my opinion on this question, at this point I would say that this bill will either not pass in this legislative period or will be dramatically changed," Amann wrote in a post to the Web site Abgeordnetenwatch.de.

The implementation of the law has some odd features -- critics have homed in on the fact that the list would only be refreshed on weekdays as a major loophole. But von der Leyen cites studies from countries that already have a ban in place showing that most searches for child pornography take place between 11 p.m. and 1 a.m. -- on weekdays. "On the weekends almost nothing is going on," von der Leyen told SPIEGEL ONLINE. "That's when offenders are with their families."