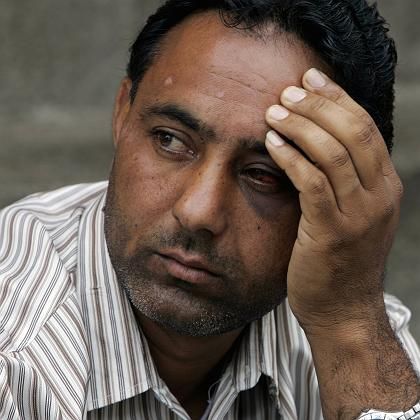 Kulvir Singh, who was beaten up and chased by a mob in Mügeln.

Everyone in Germany may still be puzzled by the case, but at least one German has made up her mind. Behind the bar at the "Mügelner Kneipe" pub, hardly 100 meters from the scene of the crime, the waitress has already formed her own impression of what happened in this small town in eastern Germany."They probably weren't entirely innocent, either, the Indians," she declares. Besides, she argues, if Germans had beaten each other to a pulp here, the story would have barely have made it into the local paper. "Exactly," mumbles a patron at the next table as he sips his beer and schnapps, "there was even a warrant out for the arrest of one of the Indians."

More than a week after the attack on eight Indians in this town of 4,700 in the eastern German state of Saxony, it's still unclear what exactly happened in the tent in front of the town hall. So everyone has his own version of events -- not just in the town of Mügeln.

German Chancellor Angela Merkel is mortified, Wolfgang Tiefensee, the cabinet minister responsible for programs aimed at rebuilding eastern Germany, calls the incident an example of "unacceptably excessive violence" and Wolfgang Thierse, vice-president of the lower house of the German parliament, the Bundestag, blames the "authoritarian legacy of East German days." Kurt Beck, the leader of the Social Democrats (SPD), is even considering calling for a ban on the radical right-wing National Democratic Party of Germany (NPD).

In short, the pundits, as usual, are busy ostracizing, interpreting and demanding. Some warn against over-dramatizing the case while others are worried that it could be trivialized. Anything is possible, as was the case in the past after attacks in Guben, Potsdam, Pretzien, Leipzig and Halberstadt. The wave of public sentiment is, most of all, an expression of one thing: the helplessness of government leaders.

In these days of collective outrage, Anetta Kahane is more in demand than ever. Her mobile phone rings 40 to 50 times a day. In the morning it's Deutschlandradio calling, at noon it's Die Tageszeitung and in the evening she's a guest on the television talk show "Heute Journal." Everyone wants her to answer the same questions: Why? Why does this keep happening, and why in the East? What's the problem?

But she usually holds her tongue, because she wants to take advantage of the two, three or four days of intense media interest that follow such cases to help local activists in the fight against right-wing extremism. The window of opportunity is brief and, according to Kahane, it's important to use it while it's there. "That's when we have the public's attention, our initiatives get a boost and sometimes we even get help from the government."

Until that window slams shut again.

Kahane, 53, has been observing the ritual of public excitement -- the waves of outrage and indignation, the calls for punishment and funding -- in the wake of extremist right-wing attacks for the past 16 years. If she has learned one thing in those years, she says, it is that while everyone is affected, no one is willing to claim responsibility. Kahane and her colleagues routinely complain about bureaucracy, confusion about who is in charge of what, and a lack of political will extending beyond the initial outrage.

It was to be expected that the debate last week would shift from the countryside in Saxony to the German capital, Berlin, where it promptly set off a feud within the governing coalition. Torgau-Oschatz, the regional district where Mügeln is located, had applied for a government grant to combat right-wing extremism. The request was turned down because the state Ministry of Social Affairs in Saxony, together with a group called "Open-minded Saxony," had argued that other regions in the state were more at risk for this type of violence.

Cabinet minister Tiefensee, a member of the SPD, nonchalantly ignored such details when he accused the Family Affairs Ministry of Ursula von der Leyen, a member of Merkel's conservative Christian Democrats, (CDU) of not paying enough attention to right-wing extremism.

There are 4,500 initiatives in Germany addressing the causes and consequences of neo-Nazi sentiment. In the last five years alone, the federal government has spent €192 million on the issue.

Each individual project seems to be valuable. But not every village can have its own project. And unemployment and social uncertainty can only be partly to blame for far-right sympathies. Friedeman Bringt, who heads a mobile consultation team in Saxony, says that the real root of the problem is that many easterners lack empathy and are unable to understand other people's point of view. According to Bringt, many in the East accept violence as legitimate. Berlin theologian Richard Schröder agrees, saying that eastern Germany suffers from "a lack of civility."

But how does one go about strengthening a civil society? Why did passersby at a wine festival in the western city of Mainz call the police two weekends ago when right-wing thugs attacked two Africans? And why is it that, all too often, those in the East simply look on without intervening? Extremism experts such as Wilhelm Heitmeyer complain that there are already places where the activists who oppose right-wing extremism are fighting a losing battle because a hostile climate against minorities and even against politicians "up there" has become the norm. According to Heitmeyer, a project's success depends on how well-connected it is to organizations in a given town, such as the volunteer fire department, the local carnival committee or other clubs. Every idea -- even democracy -- needs its advocates, champions and multipliers.

Rainer O. Neugebauer, a social scientist, has spent years observing the limits and possibilities of civil action once the media furore is over. A case in point is the eastern town of Halberstadt, where neo-Nazis attacked a group of actors after a theater debut in June. It is sobering, says Neugebauer, that only two months after the incident the community, while professing its commitment to resisting violence, still spends too little money on programs designed to reach out to its young people.

The citizens of Pretzien, a town 20 kilometers (12 miles) southeast of the eastern city of Magdeburg, believed that they had discovered a strategy for dealing with their village Nazis. They got them involved in organizations like the town choir and the volunteer fire department. The approach worked -- until the summer of 2006. That was when the local cultural society sponsored a village festival and bonfire, and when a member of the organization suddenly demanded that revelers "throw everything foreign into the fire."

A US flag was tossed into the flames, followed by a paperback edition of the "Diary of Anne Frank." "It's all lies and deception," the man throwing the items into the fire apparently said. The mayor and about 80 people attending the event looked on but said nothing.

More than a year after the book-burning incident, the town is divided into two camps, says a local resident who chooses to remain anonymous. "Here you have those who protect the neo-Nazis, and there you have the others, who want to do something." Those "others" have now formed a citizens' action group to investigate right-wing extremism in the community. Actress Iris Berben recently gave a reading from "Anne Frank" in Pretzien. During the event, one of the local neo-Nazis apparently walked in and videotaped the reading. "It's intimidating," says the anonymous resident.

Five of the book-burners, who were given nine-month suspended sentences, still live in Pretzien. Members of the volunteer fire department voted whether one of their own, who was charged with "public approval of the Holocaust," should be allowed to remain a member. The firefighters ruled in his favor. "If the court gave him probation, so should we," said one of the firemen.

A member of the town council admits that Pretzien's 940 residents are "divided." Some are angry with their dozen or so right-wing extremists, while the others would rather put the issue to rest. "No one was hurt," says one resident, "it was just paper."

Expressions of regret are unlikely, not even over the xenophobic violence in Mügeln. The right-wing website "Störtebeker-Netz" has even praised the chasing of the eight Indians as "a small popular uprising." Small towns, the website continues, are the ones "that have largely been spared multicultural progress so far," which is why the people in these places still exhibit "a healthy popular sensibility." In other words, the neo-Nazis are encouraged by what happened in Mügeln.

The frontline may be clear, but what happened that night in Mügeln remains murky. What is clear is that everything was peaceful in the tent until midnight. Of course, says Gotthard Deuse, Mügeln's mayor, there were radical right-wing extremists on the market square. But, he adds, they're always there.

Deuse had already gone to bed when, according to the police report, a tussle broke out on the dance floor at 12:30 a.m. There are various versions of why the fight broke out. Kulvir Singh, one of the Indian men who was seriously injured, says they had only been in the tent for two or three minutes when the mood suddenly changed. Apparently one of the Indians had danced with the German waitress from the Indian-owned Pizzeria Picobello. That, says Singh, was when people started pushing him and his fellow Indians who were on the dance floor. When they tried to leave the tent they found themselves engulfed in a cloud of pepper spray -- until Singh fell to the ground, presumably after being hit with a beer bottle.

There is also a German witness, Ronny K., a 21-year-old roofer from Wermsdorf. He wants to sue the Indians for damages. According to his account, the Indians knocked over an older man on the dance floor and were then surrounded by others in the tent. The Indians, says K., broke off the bottoms of their beer bottles and threatened people. According to K., he was hit in the neck with one of these broken bottles, and the wound required twelve stitches. That was when, according to K., the situation spun out of control. Kulvir Singh and his friends deny having had beer bottles in their hands.

The dramatic events that ensued are well documented. The eight Indians ran across the market square to the Picobello Pizzeria, pursued by a mob of 50 people. They locked themselves into the restaurant, whereupon the angry mob tried to force their way into the establishment. Windows were smashed, a car was demolished and the front and back doors were broken down.

It took 70 police officers to break up the mob, which had apparently formed spontaneously and was united in its dislike of foreigners. In Mügeln, ordinary citizens -- and not some organized, right-wing neo-Nazis -- were the ones who stirred up the pogrom-like mood, against people who, as Mayor Deuse insists, "were fully integrated" after having lived there for 12 years.

Deuse no longer knows what is right and what is wrong. And he fears that the incident has done long-term harm to his town.

Ninety kilometers (56 miles) to the east, the town of Hoyerswerda is already feeling the effects of an incident in its own past. A few weeks ago the Achat hotel chain renamed one of its hotels. The Achat Hotel Hoyerswerda is now called the Achat Hotel Lausitz. The name Hoyerswerda was too closely associated with the first pogrom of German postwar history -- in 1991, neo-Nazis besieged an asylum seeker's hostel for five days as local people looked on and cheered.