"Shameful!!!!" Four exclamation points punctuated a recent Facebook post, in which a user expressed outrage over an incident in the eastern German town of Lostau. Locals had accused refugees of plundering a petting zoo, slaughtering some goats and eating them around a campfire.

The story aimed directly at the heart of German animal lovers, taxpayers and immigration opponents. But there was just one problem: It wasn't true. "There hasn't been a petting zoo here for years," says Thomas Voigt, Lostau's mayor. Back when East Germany still existed, wild boars, deer and goats were kept near a clinic as a pastime for patients. "But shortly after the Wall fell, the park was closed," Voigt says. "Someone was probably just trying to incite people."

With wild stories about Muslims and their strange customs and traditions, such incitement seems to be fairly easy. Hair-raising reports about the alleged misdeeds of refugees have been circulating in Germany for months -- the myth of the slaughtered goat is just one of many. Sometimes the rumors are pure fantasy, other times they are half-truths for which fake evidence is presented.

Who really bothers to check if such stories are true in the first place? Far be it from the ordinary Facebook user to mistrust one of his or her friends. The xenophobic rumors are then quick to find their way into relevant forums, where they are augmented by even more hateful comments or they are simply copied and further distributed with the name of a new town as the site of the alleged outrage.

One such tale describes refugees' extravagant shopping tours using German taxpayer money. A resident in the Bavarian town of Schongau, for example, lamented on Facebook that an asylum seeker had bought expensive sneakers using welfare vouchers. "What single mother can afford to buy her children brand name shoes?" the woman wrote. In nearby Göppingen, an anonymous caller alerted the local paper to an alleged scheme by refugees that saw them trading old shoes in for new ones -- with the municipal government left to pick up the difference.

And in the town of Erding, near Munich, head of police Anton Altmann received an angry phone call about a refugee who refused to pay more than €400 for a €450 jacket. The police officer called to the scene allegedly just shrugged his shoulders and said the municipality would pay the difference. True or false?

"Nonsense," says Altmann. It doesn't take much thought to recognize that such stories do not hold water, he says. Still, there are some people who take the stories they read online so seriously that they call the police.

So who's spreading these falsehoods?

Online communication leaves a trail and can be traced. In the case of the murdered goat, that trail leads back to the Facebook page of a man named Peter Knoche. He's the deputy spokesman of the local chapter of the right-wing populist party Alternative for Germany (AfD) in the western German city of Wuppertal, and he admits to being the first person to publish that rumor on social media. His source was "a friend" who was "out and about" in Magdeburg.

To this day, Knoche maintains that his friend is "absolutely trustworthy." He has nevertheless deleted the story from his Facebook wall. There is no denying that the petting zoo in Lostau no longer exists, Knoche admits. But when reached via e-mail, his friend even has an explanation for that.

As it turns out, Knoche's friend is also active in the AfD's local branch in Wuppertal. He's the party's "political spokesman for asylum policy." In an e-mail, he insists that the incident at the petting zoo had been "confirmed by witnesses." He had simply gotten "mixed up" about the place. It happened in Halberstadt, he says, about 60 kilometers from Lostau. There, a zookeeper could testify to everything, Knoche's fellow party member says without providing a name. The man cannot be identified, he says, lest he risk losing his job.

"Utter nonsense," says the director of the Halberstadt zoo, Marina Breitschuh. No one plundered the zoo, she adds, and all the animals, including the goats, are doing just fine. There are also no right-wingers threatened with termination among the zookeepers, she says. Breitschuh was, however, familiar with the rumor of the slaughtered goats, but the story she heard allegedly took place in Erfurt. One call to the Thuringian capital was all it took to confirm: no missing animals.

"This is a very common pattern," says Andre Wolf from Mimikama, an online platform in Austria that fights Internet abuse. Once a fabricated story is clearly refuted, those behind it will often uproot it to another location and begin spreading the rumor there. "Some stories are like old acquaintances," says Wolf. "They resurface every few weeks or months from the depths of the Internet."

Wolf, a 38-year-old theologian, sits with his colleague, Tom Wannenmacher, 45, in front of a computer screen in their top-floor office in Vienna, not far from the Danube canal. With the help of a dozen volunteer activists, they scour the Internet every day for targeted misinformation and offer clarification or warnings on their website. "It bothers us that so many people are out there spreading lies and deceit," Wolf says. Rumors about refugees have really taken off this year. Some days they discover as many as nine new cases.

Among the classics in the Mimikama archive are official-looking letters that have either been forged or taken out of context. In the Oberhavel region north of Berlin, for instance, residents received mail bearing the letterhead of the district office, in which families were asked to come forward if their homes or apartments had more than 12 square meters per family member. Because the municipality's ability to house refugees was almost exhausted, "hosting refugees in your apartment may be necessary," the fake letter read.

The letter was a montage of actual bureaucratic wording and fantastical formulations, but the threat of compulsory quartering of refugees in private homes was entirely fictitious. "A very perfidious method of confusing people," one district administrator criticized upon learning of the scheme. The activists at Mimikama also discovered an almost identically worded letter in Dresden bearing the letterhead of the "Migration Department" of the Saxon capital's social services office.

Sometimes, Wolf explains, old pictures or videos are used to lend authenticity to the false news stories. In one instance, the folks at Mimikama found a photo of a blonde child with grotesque injuries on the far-right website "Netzplanet," under the headline, "Twelve-year-old beaten by Arabs because of his blue eyes." An Internet search revealed the photo was years old and had been used again and again in other contexts as well. In 2008, the allegedly abused boy was described as a four-year-old girl who had been attacked by a Rottweiler.

Domestic intelligence services and law enforcement officials have also begun to track down the sources of xenophobic or racist rumors that appear online. Often their research leads them to home pages or forums of right-wing extremist groups or political parties. But many operators of these sites have enough legal savvy to keep their formulations just shy of being criminally punishable, says Roland Keilen, an expert in far-right extremism at the State Office of Criminal Investigation (LKA) in the German state of Rhineland-Palatinate. A lot of the time, the websites claim to simply be passing along information from third parties. "Really extreme statements, ones that meet the criteria for sedition, are usually found in the commentaries and forums where people discuss the stories," Keilen says.

In September, the website "Dortmundecho" published an obviously fictitious report about the rape of a 17-year-old girl in the western German town of Lünen. The site is a mouthpiece for far-rightists in the Ruhr valley and has links to the neo-Nazi party Die Rechte.

The text consisted of a crude mix of anonymous whispers and purported facts: A "group of foreigners" made up of at least five men supposedly "badgered and beat a girl and forced her to perform oral sex," the report vaguely stated, although it listed a precise location. Then it said: "Only due to violent resistance on the victim's part could she (mostly) prevent further humiliation."

According to the Dortmund police department, that assault never happened. Detectives began a meticulous investigation once the rumors emerged, but to this day, they have found neither a victim nor any of the alleged suspects, a police spokesman said. Nevertheless, word of the supposed crime sparked intense reactions online. "Send them all away, those camel herders," commented one user using the pseudonym "suchmich." "Just cut off all five appendages with a dull spoon," suggested another going by the name "max." Others talked contemptuously of "bimbos," a derogatory German slang term for people with dark skin, and called upon "the Germans" to "wake up," saying that if necessary, a coup d'etat "like the ones in South and Central America" could be the way to go. And, of course, the "lying media" are accused of concealing "the criminal activities of the supposed war refugees." Their proof? No newspaper carried the story.

Keilen, the LKA expert, has a file of even more disturbing comments. He gets involved in cases when hardly veiled calls surface to set refugee shelters ablaze or kill asylum seekers with poison gas. "The comments often get more intense from post to post," he says.

Contrary to what one might expect, most hateful comments don't originate in neo-Nazi circles, according to Keilen. "We are registering an increasing amount of hate speech coming from thus far respectable citizens," many of whom are using their real names. More than a quarter of the 41 suspects against whom the LKA in Rhineland-Palatinate is investigating on suspicion of incitement are women. This too is a "new development."

In the Hessian town of Fulda, it has been reported that as many as 30 rapes have occurred since the refugees moved into town. Journalists were pressured to finally write about the situation -- although no one provided specific evidence and the police firmly deny that any sexual abuse has taken place to such a degree.

So why do even well educated people take such fabrications at face value? Rumors spread particularly easy when they seem to confirm stereotypes that already exist in society, says the Leipzig-based social psychologist Immo Fritsche. A part of the population obviously regards asylum seekers as being predisposed to crime and willing to exploit most people's good nature. Strategically placed gossip that reinforces this sentiment is particularly effective in times of uncertainty, according to the psychologist.

That some people's threshold for turning to violence can be lowered if they feel strengthened in their xenophobic stereotypes is one of Keilen's fears too. He has dealt with far-right extremism for nearly 25 years, but things haven't been as serious as they are at the moment since the early 1990s. "Things escalate thanks to the Internet," says Keilen. "And some people blindly take the stories for the truth. They radicalize themselves to such an extent that they are no longer receptive to rational arguments." 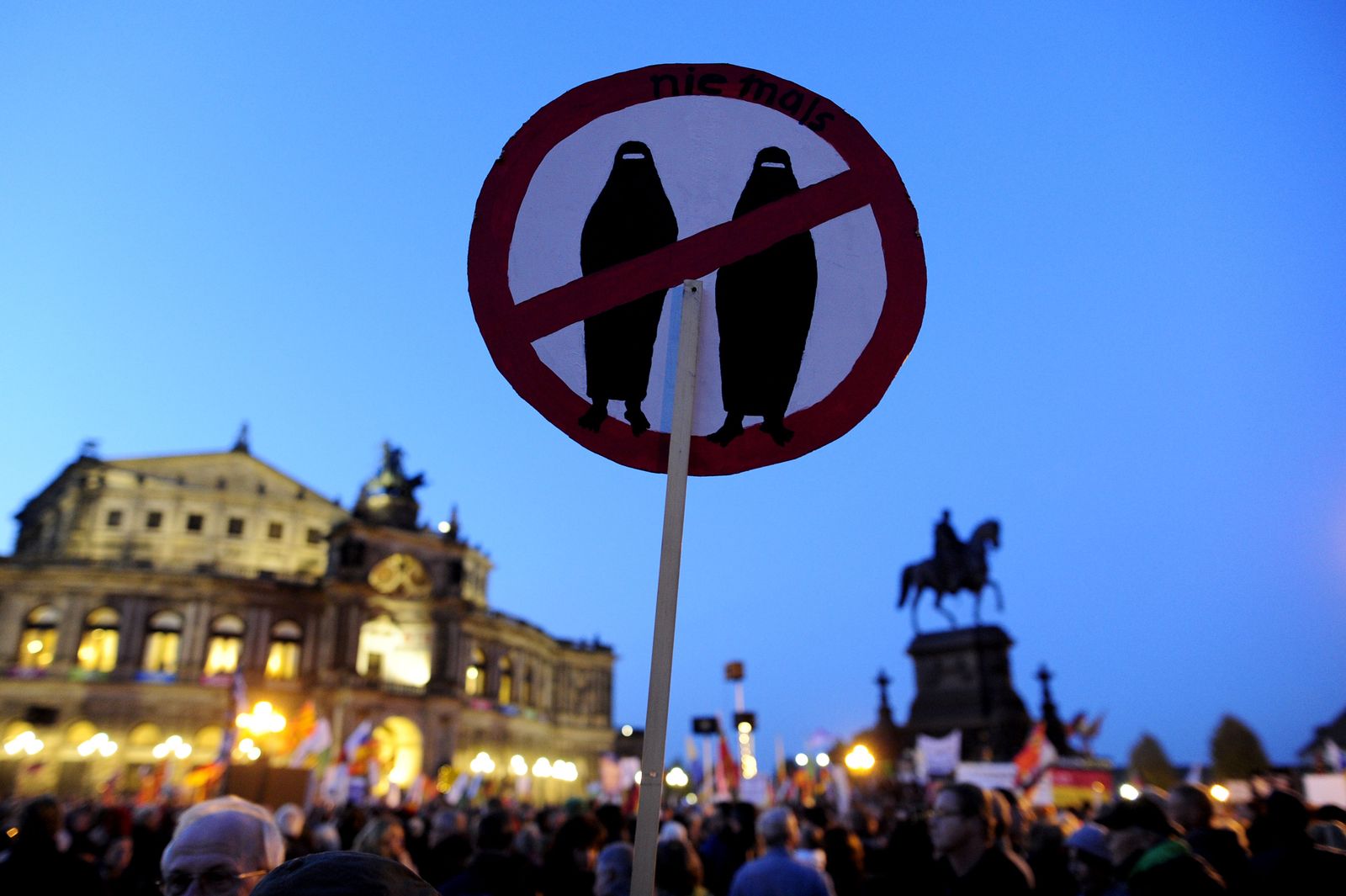 False rumors of misdeeds by Muslim refugees are everywhere in the Internet. But where do they come from? 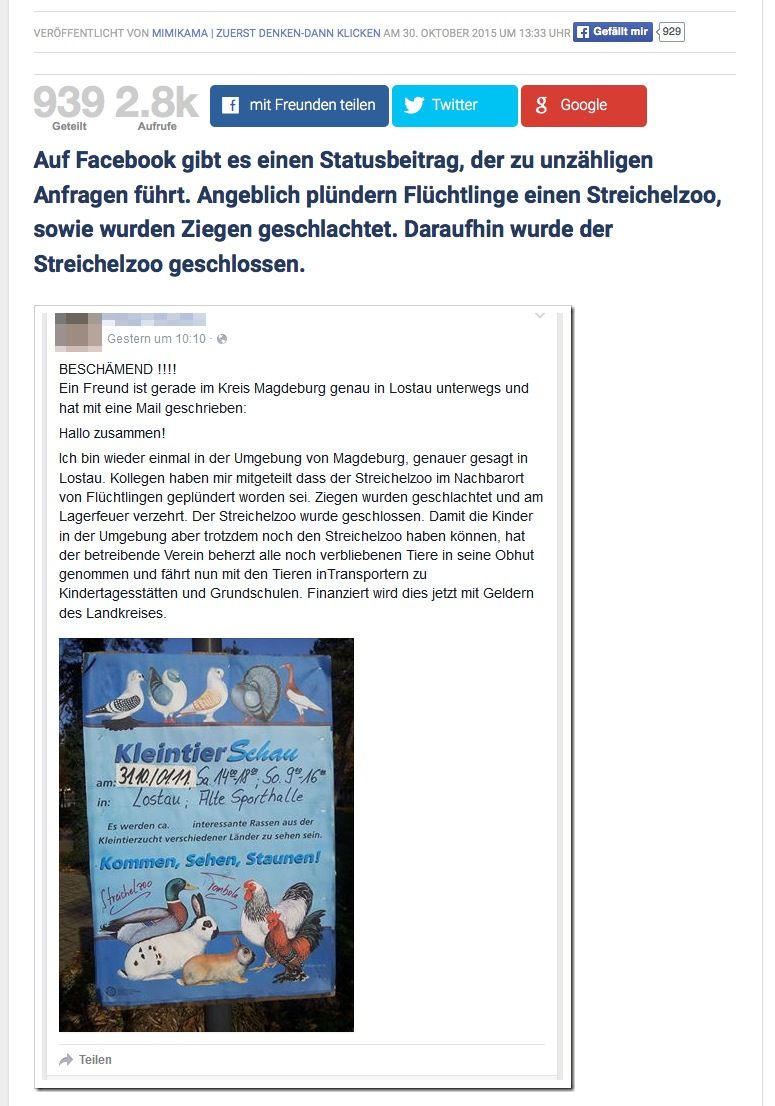 A screenshot of the Facebook posting about the alleged slaughtering of goats at the Lostau petting zoo. 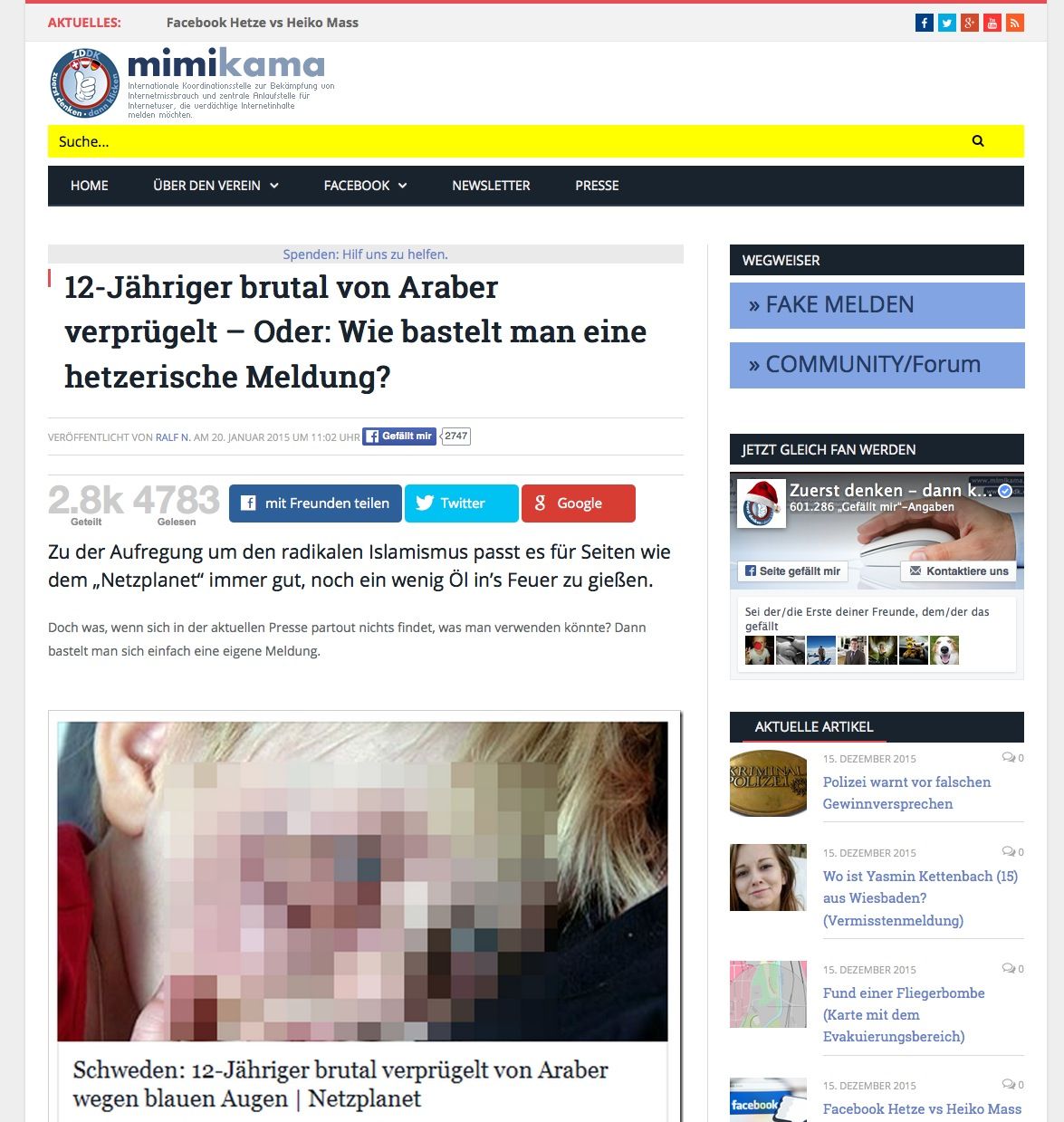 A screenshot of a posting about a 12 year old boy allegedly beaten by Arabs. But the picture has been used before in connection with other stories, such as that of a boy being attacked by a Rottweiler.