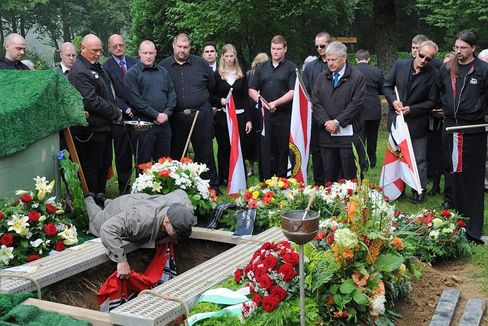 Far-right extremist Thomas Wulff, a member of the NPD's board, lying down to drape a swastika flag over the coffin, in full view of the ammased NPD leadership including chairman Udo Voigt (with hands folded holding a white paper).

Udo Voigt, chairman of the National Democratic Party, cannot claim he didn't see what was going on. NPD activist Thomas Wulff, known in far-right circles as Steiner after an SS officer, had lain down in front of the grave of old Nazi Friedhelm Busse to drape a large flag over the coffin -- a Nazi war flag with a large swastika in the middle.

Voigt was standing right in front of the grave and had a good view of the scene. The display of swastikas and other Nazi symbols are strictly forbidden in Germany.

Voigt watched as the coffin draped in the cloth disappeared under earth. However, an intelligence officer had been watching proceedings at the funeral in Passau, southern Germany, on Saturday July 26. A few days later the grave was opened on the orders of the local state prosecutor's office and the flag was removed.

Now Wulff faces possible charges of using unconstitutional symbols, an offense punishable by up to three years in jail or a fine.

The investigation is the latest in a series of legal problems besetting senior NPD officials, and presents the party with significant problems on two fronts.

Firstly, the use of a swastika flag by Wulff, a member of the NPD's board, risks thwarting the party's efforts to portray itself as a modern organisation divorced from Nazi ideology. Secondly, Voigt and several of his fellow NPD board members have angered militant members of the neo-Nazi scene with their attempts to distance themselves from the graveside incident.

For neo-Nazis, Busse, who was head of the Liberal German Workers' Party until it was outlawed in 1995, was a hero. He had been convicted of incitement to racism and denigrating the institutions of the state. Busse died on July 23 aged 79. Some 90 far-right radicals made a pilgrimage to his burial in Passau, and there were attacks on immigrants in the city afterwards. One journalist was also assaulted.

It took five days for the NPD's board to make a statement on the illegal flag display by one of its members. "Working for a socially just Germany doesn't require any of yesterday's symbolism," the leadership said in a statement. The party disapproved of individuals who seized on Busse's burial as an opportunity for political self-portrayal which was not in keeping with the NPD's goals, the statement added.

Busse himself would not have approved of the flag display, the statement added, which quoted him as having once said: "Those who think they can engage in politics with yesterday's symbols won't be able to shape the future."

The statement caused outrage among the so-called "free scene" of neo-Nazis. Within the NPD, Wulff is regarded as an important link to militant neo-Nazi circles where many would prefer to believe the legend that it was Busse's last wish to have his coffin draped with a swastika.

A far-right Web site declared that the NPD's statement was hypocritical and called it a "failed attempt to fend off charges against it." The NPD had evidently tried to use Busse's burial for its own political goals, the statement said.

What followed was a blatant threat: "We cannot accept such cheap and derogatory attacks on the free forces and will cease our cooperation with the party leadership unless an agreement is reached regarding sensible behavior by the NPD," the authors thundered in their statement which appeared on Tuesday.

It was signed by a number of prominent neo-Nazis from all over Germany, including NPD members.

The statement shows how weak the alliance between the "respectable" party officials and the militant scene has become. Voigt knows that without the radical foot soldiers, his "right-wing people's front" lacks a key pillar. But Voigt also faces opposition from within the NPD, where members have accused the leadership of becoming increasingly distant from the rank and file.

The internal struggle within the party, which last became evident with the election into the NPD leadership of hard core neo-Nazi Jürgen Rieger at a conference in May, appears to be intensifying.