The German government on Tuesday banned the far-right youth organisation "Heimattreue Deutsche Jugend", or German Youth Faithful to the Homeland, for seeking to indoctrinate children with racist and National Socialist ideology. 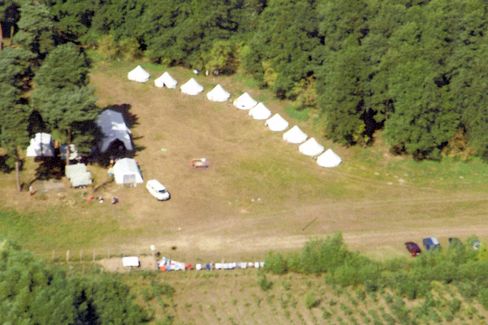 A police handout photo from August 2007 shows a neo-Nazi summer camp run by the HDJ near Rostock.

Police searched the homes and offices of leading members of the group in Berlin and the states of Lower Saxony, Brandenburg and Saxony. The ban means the HDJ is dissolved with immediate effect and its assets have been confiscated.

"Today's ban puts a stop to the disgusting activities of the HDJ," Interior Minister Wolfgang Schäuble said in a statement. "We will do everything in our power to protect our children from these rat catchers."

By organising supposedly harmless outdoor activities such as summer camping holidays, the HDJ had tried to turn children and teenagers into Nazis, the ministry said, adding that outlawing the group underscored the government's commitment to fighting right-wing extremism in Germany.

Police had been investigating the group since last October when it searched the homes of HDJ activists and found evidence that the group was opposed to the country's democratic constitution and worshipped the Nazis.

The HDJ was founded in 1990 and has an estimated 400 members across Germany. Its small membership belies its considerable influence on Germany's neo-Nazi scene. Its camp holidays, where several hundred young people are versed in Nazi ideology, are infamous. The tents bore names such as "Führer's Bunker."

The interior ministry said children were put through military-style drills and were taught that foreigners were "enemies of the people." There were training courses in "racial science" where children were taught about the need to "restore blood purity." A similar youth group called "Viking Jugend" -- or Viking Youth -- was banned in 1994.

The ministry said the organisation was prohibited from continuing its work under another name, and that anyone breaking that rule faced a fine or a jail sentence of up to one year.

Gabriele Fograscher, a member of parliament for the center-left Social Democrats, said the ban should have come sooner. "A faster analysis of the material confiscated and a quicker ban of the HDJ would have been a clearer signal against far-right groups," she said in a statement. "The HDJ had a paramilitary and unconstitutional character and there were close ties and staff links with the National Democratic Party and the neo-Nazi scene," Fograscher said, referring to the far right NPD party.

She said that in addition to clampdowns on far-right groups, parents and teachers needed to become more attuned to the threat to stop children drifting into the far-right scene.

Analysts of right extremism have warned that Germany's neo-Nazi scene is growing and becoming more dangerous , and a major study of teenager's attitudes published recently showed racist and far-right attitudes were widespread among young people.