It was something of a rallying cry when Berlin Fashion Week first started back in 2007: "Berlin could be the next Paris," many in the German media enthused. Or maybe, "Berlin could be the next European center for fashion," if they were feeling more realistic. This week, the sixth Berlin Fashion Week kicks off and if Berliners can look past all the pretty girls and boys, the glamor, the frocks and hype, they may find themselves wondering if their city really does have the right stuff to become "the next Paris."

Even before the fashion shows started, there had been criticism of the way the event was developing. One of Germany's best known designers, Wolfgang Joop, decided not to show his label, Wunderkind, at the event despite the fact that the 65-year-old designer actually lives and works on the outskirts of Berlin. (Joop sold his first label, Joop!, in 2001 and that label is taking part). 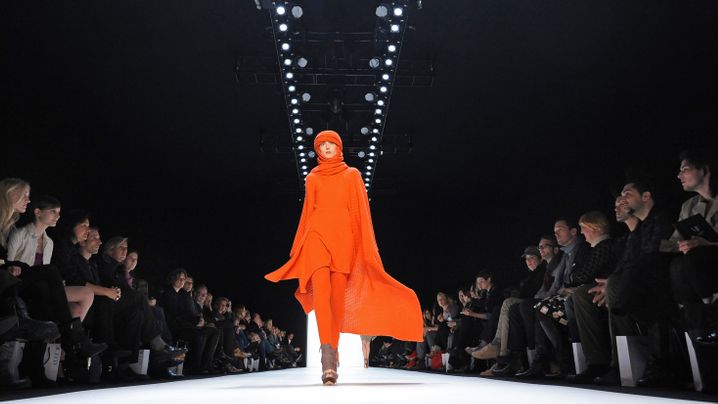 Photo Gallery: The Next Paris?

In an interview with the mass-circulation daily Bild, Joop, who is known for his less than diplomatic statements about everything from Angela Merkel's décolletage to Hamburg's sartorial habits, said that he feared the fashion shows in Berlin were turning into media spectacles, attended by B-list celebrities who were not even interested in fashion.

He also had complaints about the caliber of the fashion on show. "I don't see any labels that have enough power and that stand out," he told the newspaper, saying "the radicals" were missing. Joop says that from now on he will only be showing his clothing in Paris, where he has usually shown in the past.

Also missing are the most important international fashion media, whose commentary and attention is required if the participating designers are to achieve vital international exposure. Last year, Berlin Fashion Week managed to entice Suzy Menkes, the respected fashion editor of the Paris-based International Herald Tribune, to their shows. But Menkes is not returning for this round -- she is busy, attending the menswear shows in Paris this week.

It's not the only competition the Berlin Fashion Week has in terms of scheduling. In Europe, there are also the Milan menswear shows. With the likes of big name brands like Gucci and Yves Saint Laurent on the runway, both the Milan and Paris events are compulsory viewing for the most influential fashion media and buyers. And Sao Paolo and Hong Kong are hosting fashion weeks at the same time -- both have been going longer than the Berlin event, and are competing with the German capital to attract the attention of the same global tastemakers.

Big Business for the City

Berlin Fashion Week has also attracted some unwanted local controversy. Shortly before the event began, the Berlin government decided that this would be the last Berlin Fashion Week based at Bebelplatz, a public square in the historic city center. They were responding to criticism that a fashion event was being held on the very site of the infamous Nazi burning of around 20,000 books in 1933. In an open letter the anti-fashionistas urged that the square "remain free of trivial, mass gatherings." The city eventually agreed, saying that no further "non-cultural events" may take place there.

The fashion industry may not be deemed culture by the Berlin government, but it can certainly mean big business for the city. While a fashion week is essentially a glorified trade show where designers show store owners and media what they hope to sell in a few months time, over the past decade or so it has become a business unto itself. Berlin's fashion week is now run by the US-based company IMG, a sports and talent management and entertainment agency that organizes fashion weeks in New York, San Francisco, Sydney, Singapore, Bombay and a handful of other cities around the world.

With fashion becoming something of a spectator sport, every major city wants its own runway shows that reflect its own marketplace. After all, not everyone can come to Paris -- and IMG has turned smaller shows into a profitable business. Designers pay to put on shows, sponsors pay to be involved. And Daniel Aubke, the spokesperson for Berlin Fashion Week, reports that after five events, the sixth German event is now starting to turn a profit. Additionally there is a lot of peripheral business being done in hotels, restaurants, bars and taxis; according to the Berlin tourism board, last year the average Fashion Week visitor spent around €240 per day.

But is the increasing success of its fashion week putting Berlin on course to become "the next Paris"? In reality, no. It will always be extremely hard to compete with Paris, or even Milan, where fashion industries have been based for, literally, hundreds of years, where those industries are worth billions, employ hundreds of thousands and where, as a result, fashion is taken very seriously indeed. Designers want to show there for exactly that reason. In fact, even the big German labels, like Hugo Boss, show their premium stock there. While the Boss brand does take part in Berlin Fashion Week, but it presents a more affordable range. London is not quite at the same level, but it has a long tradition of anarchic creativity that tends to draw top buyers and media looking for the latest thing. Often the experimental young designer discovered in London goes on to work, and show, in Paris or Milan.

'We Want Berlin to Be Something Unique'

And in fact, as Aubke will let anyone know, Berlin has never had ambitions to be the next Paris. "There are a lot of comparisons," he admits. "But whenever I hear them I try to explain to people that that is not what we want," he says. "That is never what we wanted. No, we want Berlin to be something unique. And we never want to copy anyone in Paris. We see ourselves as a mirror of the German fashion industry."

Aubke says that Berlin Fashion Week would eventually like to be part of what he calls the "grand slam" of European fashion events -- meaning London, Paris and Milan -- and he thinks that this is an achievable goal. "That is coming," Aubke confirms optimistically, noting that when the semi-annual Berlin Fashion Week first began in 2007 a lot of people outside of Germany did not even know it was happening.

Even within Germany a lot of the most prestigious magazines, most of which are based in Munich, did not send their editors-in-chief to Berlin for the shows. Instead they chose to send a more junior representative. But that is changing. This week, Aubke says, the editors-in-chief are all in Berlin. Additionally he believes local designers are more aware of what Berlin Fashion Week can do for them. They no longer automatically think they need to show their collections in Milan or Paris first. "And as a result of all of this," Aubke says, "we are being taken more seriously."

One of the senior editors in Berlin for fashion week is Christiane Arp, the editor-in-chief of the German edition of high fashion magazine, Vogue. She too shies away from comparisons. "We do not need to be a second Paris," Arp argues. "Berlin needs to develop its own unique identity."

Aubke says that is exactly why IMG chose to set up the German fashion event in Berlin, despite the fact that most of the fashion industry and fashion media are located in other cities like Munich, Hamburg or Düsseldorf. Research done at the end of 2005, during initial planning, suggested that the rest of the world would rather be in Berlin. Outside of the country, the city was seen as hip and happening, a center for the arts and creativity. "For us it was clear that if we wanted to attract an international audience, it would have to happen here," Aubke explains.

There is also a lot of serious business, worth millions, being done parallel to the official Berlin Fashion Week this week. Bread & Butter is the world's largest streetwear trade show and it returned from Barcelona last year to sign a 10 year contract with the city of Berlin. In fact, Bread & Butter can safely be credited with bringing the real business of fashion, as well as serious international attention, back to the city on a large scale. And then there are the other trade fairs this week, including Premium for 900 mainstream labels, 5 Elements for beachwear and lingerie, The Key.To, an event devoted to green lifestyle and sustainable fashion as well as the Spirit of Fashion fair, which focuses on the sort of punk, rockabilly and Goth looks that Berlin has been best known for up until relatively recently.

Arp feels that it's a combination of everything happening in Berlin this week that may eventually be the city's ticket to the so-called "grand slam" of fashion. As she says: "Hardly any other city has that combination of trade fairs and runway shows taking place at once. Berlin also has the cultural capital that so many people want more of." Berlin Fashion Week is important, she concludes, "because it puts paid to the myth that there is no good design in Germany. And it gives established and younger designers a platform."

15 Bilder Photo Gallery: The Next Paris?