One party is the business-friendly, junior partner in German Chancellor Angela Merkel's government coalition in Berlin. The other has been described by Germany's domestic intelligence agency as racist, anti-Semitic and revisionist.

When both parties release ads adopting literally the same images, it is bound to raise some eyebrows, and that's precisely what happened with Germany's Free Democratic Party (FDP) and the far-right National Democratic Party (NPD) this week.

The headache began for the mainstream FDP party when Markus Brendel, the co-owner of a Stuttgart-based ad agency stumbled across the similarities late Monday night. In an email to his business partners, Brendel sent a link to the NPD ad and asked them to take a look, knowing an issue this big couldn't wait until the next morning. While clicking through channels late at night with his remote control, an ad broadcast by the FDP with its main candidate for chancellor, Rainer Brüderle, gave him reason for pause. One of the scenes in the 90-second video clip seemed familiar to him. It shows a picture book family of four -- father, mother, son and daughter -- all making a good impression as they cycle down a sun-soaked road wearing helmets.

But what the creators of the FDP campaign ad seem to have overlooked is that the right-wing extremist NPD used the same images in one of their own campaign ads for the September 22 national election.

As a man working in the advertising industry, Brendel is familiar with the campaign ads produced by most political parties. "Does anything jump out at you?" he wrote to colleagues at his firm.

But they didn't stop there. Brendel and his colleagues conducted Google image searches and quickly found that the same bike-riding family had often been used for other advertising purposes. They even stumbled across a Finnish food manufacturer that uses the same family on a Sunday bike ride sequence to advertise a dairy product.

The website with the dairy ad has since been taken down, but the Stuttgart ad agency created a video showing the images next to each other, as this screen grab shows:

On Tuesday, the odd photo montage went viral. It has already been shared more than 2,000 times on Facebook and there has been a small flurry of jokes about the FDP's campaign ad gaffe on Twitter.

The FDP responded for the first time early Tuesday afternoon, stating that the firm that had produced the ad, Reinsclassen, had purchased stock film to produce it. Of course, there's nothing unusual about political parties in Germany using stock footage in their campaign ads. Be it ads for yoghurt or pasta sauce, good-looking families are always popular motifs for selling a product.

The party's headquarters also stated that FDP officials had no idea the same stock footage had been used by the far-right NPD. "We're currently removing the corresponding footage and replacing it with another scene," the spokesperson said.

Still, having its ad compared with that of a party many in Berlin would like to see banned for its xenophobic leanings must still be an embarrassment for the FDP. 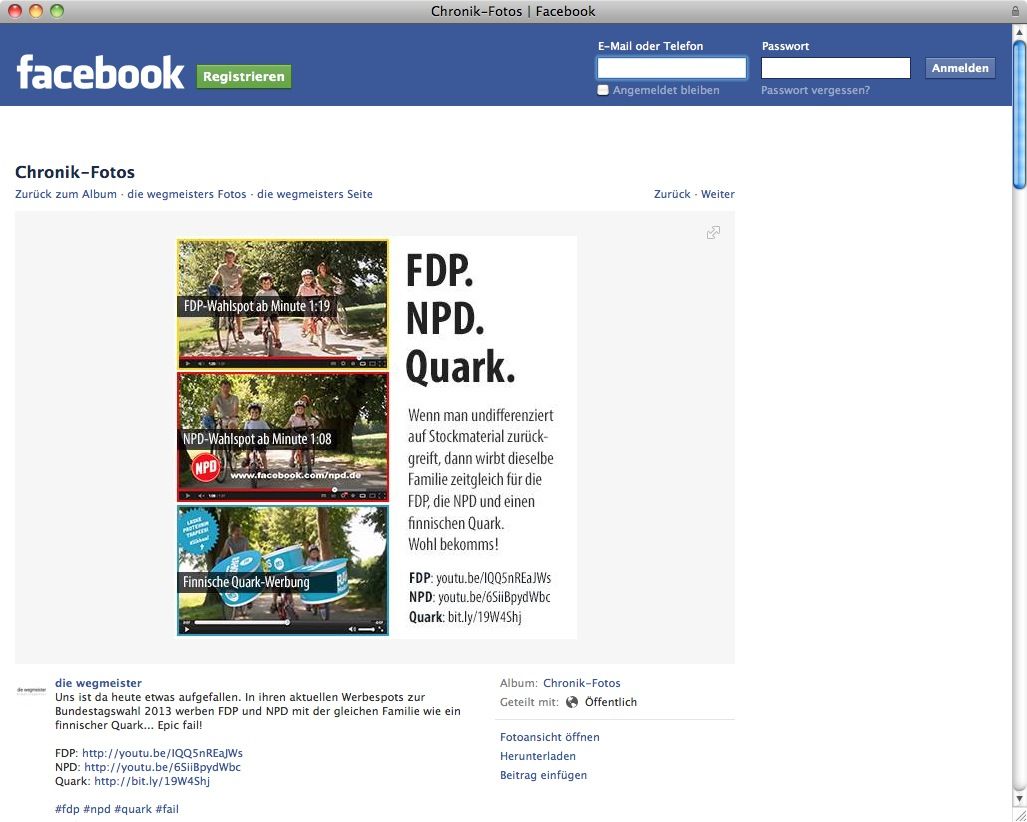