On the day after the election Guido Westerwelle, 47, the leader of the pro-business Free Democrats, was clearly at pains to avoid betraying any signs of triumph. His demeanour at Monday's post-election news conference seemed aimed at allaying fears of a center-right government. The FDP was above all "a party for all people," he said. He promised it would deliver "solid" and "thorough" work.

He sounded stiff and statesmanlike -- just like Angela Merkel, who declared after the election that she would be "Chancellor of all Germans."

Westerwelle is tipped to become Germany first openly gay foreign minister but he refused to answer questions about FDP cabinet posts on Monday. An English-speaking reporter asked him at Monday's news conference to say in English what changes he would make as foreign minister.

He declined to answer and admonished the reporter, pointing out that news conferences in Britain were held in English, not German. "We're in Germany here," said Westerwelle. When the BBC reporter had the question translated into German, Westerwelle curtly responded that he wouldn't at this stage enter into a debate about cabinet posts, including his own. 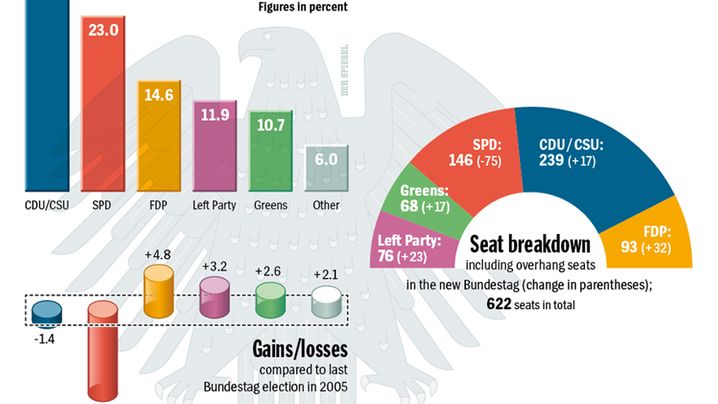 He said he would meet Merkel later on Monday for preliminary talks and that negotiations to form a coalition would be "speedy but thorough." Sources close to the FDP said talks could start next week.

The FDP owes much of its record election result to Westerwelle, and Hans Dietrich Genscher, the honorary FDP chairman who served as German foreign minister from 1974 until 1992, lauded his role at a party meeting on Sunday night. Support for the party jumped 4.8 points to 14.6 percent, its best ever score in a national election.

Genscher's praise was like receiving a knighthood, because the veteran and other senior FDP members haven't always been so supportive of Westerwelle. His standing in the party was damaged by the 2002 election campaign in which he had tried to win votes by raising laughs, traveling around the country in a "Guidomobil," having his election goal of 18 percent printed on the soles of his shoes and appearing on "Big Brother."

For a time, he became a laughing stock in the German political scene and even Chancellor Angela Merkel's aides wondered whether she should associate herself too closely with him. But throughout her first term, when she ruled in a coalition with the center-left Social Democrats, Merkel kept in touch with Westerwelle. They met regularly and exchanged text messages. "We know each other well, some would even say very well," Westerwelle said on Monday. Their personal relationship would be a "solid foundation" for their work together in government, he said.

The SPD and the Greens have tried to label Westerwelle as a neoliberal who can't be taken seriously, but their attempts during the campaign to stoke fears of a center-right coalition between Merkel's conservatives and the FDP failed to deter voters. He has worked to shed his image as being irascible, and says he has become "more experienced and mature."

That didn't stop Horst Seehofer, the leader of the Bavarian Christian Social Union, dismissing Westerwelle as "Mr. Sensitive" during the campaign.

But the FDP's success is also explained by its ability to broaden its appeal. Westerwelle embraced the left wing of his party under former Justice Minister Sabine Leutheusser-Schnarrenberger, and on election night reiterated the mantra which helped him score points with voters -- tax cuts, education and civil rights.

The FDP is without doubt the biggest winner of the election. It probably profited from the fact that the conservatives and the SPD pushed for heavy state intervention in the economy during the financial crisis, and in doing so sent many free marketeers in their ranks fleeing into the arms of the FDP.

Angela Merkel and Guido Westerwelle will rule Germany, a woman and a homosexual, two groups in society that have long suffered discrimination and in many cases still do. This election result shows Germany to be an open, liberal country, and that's a good sign.