Recently deceased pop star, Michael Jackson, may have had more to do with the fall of the Berlin Wall than anyone ever knew. And so might the likes of Bruce Springsteen, Pink Floyd and other musicians from the capitalist West.

Files kept by the former East German secret police, the Stasi, indicate that they were worried about the concert that Jackson, who died last month, gave in Berlin in June of 1988. This was just over a year before the fall of the Berlin Wall -- but the East German youth were already restive.

In a note from the Stasi, found in files revealed by German mass circulation newspaper Bild this week, the secret police were worried that the "youths will do anything they can to experience this concert, in the area around the Brandenburg Gate." And, they noted, "certain youths are planning to (use the occasion) to provoke a confrontation with police."

"They were concerned dissident youths would call for the Wall to fall," Steffen Mayer, a spokesman for the government agency that looks after the Stasi archives, told Reuters. "This was seen as a potential security threat given the amount of foreign media that would be present."

In fact, the Stasi had good reason to worry. Concerts in West Berlin like Jackson's had already been a problem the previous summer. German music promoter, Peter Schwenkow, currently head of German Entertainment AG (DEAG) a firm which now brings in acts like Coldplay and Alice Cooper, had been responsible for putting on various concerts near the Berlin Wall. This included a three day, open air concert series featuring acts like David Bowie, Genesis and the Eurythmics in the summer of 1987. Schwenkow later told Die Welt newspaper that putting on the concerts in West Berlin, right next to the Wall, had been deliberate.

Pink Floyd Turned Their Speakers Toward The East

East German youths had been informed of the gig by West German radio stations but when they tried to get near the Berlin Wall so they too could listen to the show, they were turned back by police cordons. There were scuffles and around 200 people were arrested.

When more shows -- Pink Floyd was one, Michael Jackson another -- were planned for the same spot in the summer of 1988, Schwenkow says that the East Berlin government complained to the West Berlin administration. They said that the concerts were too close to a nearby hospital and that the noise and vibration could cause the deaths of seriously ill patients there.

"But I had already sold 30,000 tickets to Pink Floyd -- the concert couldn't be cancelled," Schwenkow said. "Even though we had to make sure that we played very quietly and directed our sound toward the west, it was Pink Floyd's decision, during sound check, to turn the speakers toward the east and blast East Berlin with (Pink Floyd hit) 'The Wall.'"

Pink Floyd played on June 16 and Michael Jackson was to play a few days later on June 19. So perhaps it is hardly surprising that by May of that year, the East German secret police had opened up a file on Jackson. Notes in his file indicate he had been watched as he toured Berlin. The Stasi observed Jackson's visit to the Allied Checkpoint Charlie, an important border crossing in the middle of the city. Stasi spies noted that three cars pulled up to the checkpoint building, with "many unknown male and female people. Among the people was the USA rock singer Michael Jackson. Accompanying him at all times was a female person, about 25 years old, 165 centimeters tall, with a slim build." 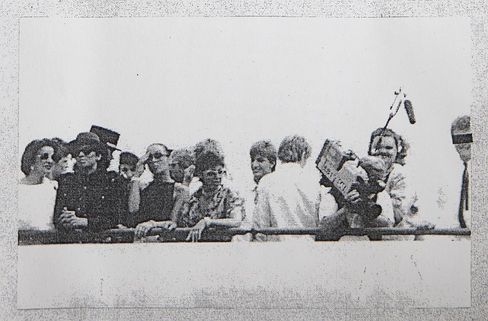 The documents also outlined how the Stasi were considering a diversionary concert in a stadium to draw rebellious music fans away from the border. There was already one diversion: Olympic ice skating champion Katarina Witt was hosting a "Rock Show" further away, in East Berlin, starring Canadian musician Bryan Adams. In Jackson's case, it was suggested that an additional alternative be organized, during which Jackson's show could be broadcast onto a cinema screen. And there would be a two minute delay, in case of "political provocation." Should Jackson's concert feature anything politically inappropriate then they would simply play a video of an earlier Jackson show.

Secret Police 'Hurled The Young People To The Ground.'

As it was, the distraction never happened. Instead, as feared, there were violent clashes between East German music fans and police, many of whom were in civilian clothes, mixing into a crowd of thousands. As eyewitness, Alan Nothnagle, a translator living in Berlin, writes on his Salon.com blog: "We noticed 'inconspicuous' men in civilian clothes, slouching on street corners in groups of three, eyeing the passers-by. The reason was no secret: somehow everyone knew that Michael Jackson was giving a concert in front of the Reichstag that evening, just a few hundred meters from where we were standing  Hundreds, soon thousands of young people congregated to hear the music. The Stasi agents also multiplied... We never heard a note of music that night, but soon voices arose in the crowd calling 'The Wall must go!' and 'Gorbachev! Gorbachev!' Now the plainclothes Stasi men came alive. They hurled the young people to the ground, shouting 'What did you say? What did you say?' and hauled them off by the collar into side streets where police vans were waiting to bundle them off to Stasi headquarters."

Television camera crews from the West German channels, ARD and ZDF, filmed the altercation and also came under attack from the secret police. The West German administration later made official complaints about the mishandling of members of the western press.

Strangely enough, exactly a month later, American singer, Bruce Springsteen played at an East Berlin velodrome, to around 160,000 East German fans, many of whom had entered the grounds without tickets. At that concert, which was organised by the Communist youth group, there was provocation aplenty. East Germans sang along to "Born in the USA and Springsteen pulled a 17 year old East German Fraulein onto the stage to dance with him. "I want to tell you I'm not here for or against any government," Springsteen called out to the crowd as he introduced his version of the Bob Dylan song, "Chimes of Freedom". "I came to play rock'n'roll for you East Berliners in the hope that one day all the barriers will be torn down." The official broadcast of the concert was censored.