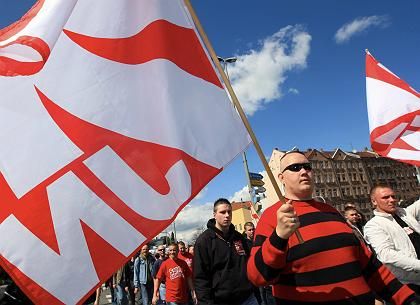 A demonstration by supporters of Germany's far-right NPD party in Nuremberg in May. Germany's intelligence agency fears the European far-right scene may be getting a new headquarters in Berlin.

The avenue in western Berlin's Zehlendorf district is one of the city's most exclusive residential areas. Proud villas line the quiet street and luxurious bungalows are set in park-like gardens.

The villa with access to the lake fits in with the general architectural grandeur. A Mercedes limousine and a sports utility vehicle are parked in the drive. The area is secured by metal gates and surveillance cameras.

The occupier evidently doesn't want to be disturbed by anyone, least of all by German intelligence agents who have been showing an interest in him for some time now. Swedish businessman Patrik Brinkmann, 41, is regarded as a leading figure in the international far-right scene. The "Continent Europe Foundation" he set up counts the upper echelons of Europe's far-right scene among its members. He has close contacts with neo-Fascists in Spain and Italy, as well as with Germany's far-right National Democratic Party.

Until now, Brinkmann has been operating discreetly from rural Sweden. But he appears to have relocated his political activities to the German capital of late. German domestic intelligence agents were worried when they learned that Brinkmann and his wife Svetlana acquired the Zehlendorf villa last year.

Brinkmann signed the purchase contract for the villa at a Berlin lawyer's office on April 26, 2007. He says the purchase is "purely private". The €3.3 million price evidently wasn't a problem for the businessman. Brinkmann made the purchase as a trustee of his wife who is the official owner of the property, and who reportedly also owns other real estate from which her husband profits. This manoeuvre may be explained by the lengthy dispute with Swedish tax authorities which Brinkman managed to resolve in his favor last year.

Men in Dark Limousines With Bodyguards

Neighbors noticed strange goings on soon after Brinkmann moved in. Dark limousines regularly drive up to the villa and men accompanied by bodyguards get out. Board members of the "Continent Europe Foundation" are also believed to have visited the villa. The work of the foundation could soon be coordinated from Berlin, according to one insider.

Since 2004, Brinkmann has been gathering ultra-right intellectuals from all over Europe in his foundation, which until now has been operating from a post box address (Box 167) in the Swedish town of Jönköping. Among them are far-right professor Pierre Vial from France and the former advisor to Mikhail Gorbachev, professor Wjatcheslav Daschitschev.

The blood and soil proponents from Madrid to Moscow share a crude ideology, says the Hamburg branch of the Office for the Protection of the Constitution, Germany's domestic intelligence agency.

The members of the foundation dream of a white "pan-European civilisation" to counter the "physical death" through immigration from other parts of the world and the "political death" through Americanism, says the agency, which is especially concerned that two NPD activists belong to Brinkmann's foundation. Lutz Dessau, an author of NPD newspaper "Deutsche Stimme", is a member of the foundation's directorate. Former teacher Andreas Molau, member of the NPD's national executive, is on the foundation's board.

Brinkmann is also believed to be behind a further real estate purchase in Germany. In May 2007, just a few days after Brinkmann had acquired the Berlin villa, Andreas Molau's wife bought a sizeable manor in the Brandenburg town of Rauen for €200,000. The property appeared to have been bought to house an NPD training center. Mrs Molau was acting on behalf of an obscure Swedish firm that resided at the same post box address "Box 167" as Brinkmann's foundation. Molau didn't want to name who was putting up the money. She said they were "foreign investors" who wanted to remain anonymous.

Brinkmann had himself informed about the progress of the project by a number of people including NPD Chairman Udo Voigt. The party has treated its dealings with Brinkmann like a top secret operation. In their internal communications NPD members avoid naming Brinkmann and only refer to "our friend."

The German-Swedish joint venture in Rauen threatens to collapse after the plans became public. The Berlin property deal was successfully kept secret until now. Its purpose, one foundation insider says, is clear: Brinkmann wants to increase his influence on Germany's far-right scene from the leafy Berlin district of Zehlendorf.

The Swede has taken one important step in that direction. He has duly had himself registered with the Berlin citizens' registry office.