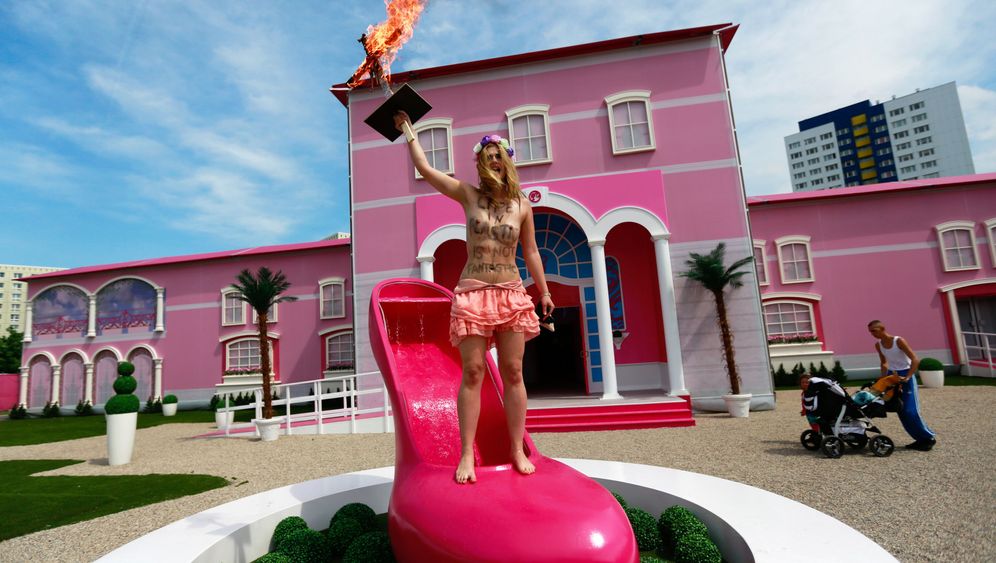 For a moment, it seemed like Femen had arrived on the mainstream political stage. Josephine, a Femen activist, was chatting away with her hosts, representatives of the center-left Social Democrats (SPD). Just one seat away sat Olaf Scholz, the SPD mayor of the northern city-state of Hamburg. As he stepped up to the podium, Femen activist Zana straightened her glasses, while fellow-crusader Hellen clapped politely.

Ten minutes later, while Scholz was talking about "the principle of equity and rightfulness" in refugee policies, the three women tore off their blouses, ran toward the mayor, wrangled with his bodyguards and repeatedly shouted "Shame on you, Scholz!" Hellen had the words "Ditch Scholz" painted on her chest and "Stop Racism" on her back. In terms of Femen protests, it was a rather standard affair, only tailored for the ongoing refugee controversy in Hamburg.

For a year now, the bare-breasted warriors from Ukraine have had a base in the port city. They and their counterparts in Berlin have been sounding a rallying cry in the debate over feminism. The women have attacked Vladimir Putin at a trade fair in Hanover, stormed the stage of the Heidi Klum hit show "Germany's Next Topmodel" and protested in front of the Chancellery and on the Reeperbahn, the heart of Hamburg's red-light district.

The group's first protest, at a Hamburg IKEA in October 2012, was only covered by local media. After their ambush of Scholz, the three feminists laughed it up over beers at a Thai restaurant, commenting that Scholz's bodyguards are now quite familiar with them.

The only issue, however, is that Femen has become a household name in Germany. Of course, that is a success in its own right -- but also the problem.

Nevertheless, the group's members in Germany, who now number a bit over 12, want to remain true to their cause. But, to do so, they're going to have to come up with something new. Other feminists have badmouthed their way of protesting for some time. What's changed, though, is that the group's now-routinized form of protest is increasingly boring its core constiuency -- the very people who don't immediately write Femen members off as simple-minded, anti-religious and suffering from historical amnesia. Indeed, the group is in danger of becoming, in a word, old.

Without drawing attention and media coverage, the Femen tactic is ineffectual. After they were released by Hamburg police following the Scholz attack, the three activists immediately checked their smartphones to see who was already reporting on their feat. "We wanted to say to the face of the man responsible for the racist controls in Hamburg that he should be ashamed of himself," said activist Hellen Langhorst. "And we're drawing international attention to the refugee problem."

Femen has developed a habitual protest routine. They tip off reporters before any demonstrations. What's more, whenever they are charged with trespassing or slander, the case is often dropped.

The question is: Do their protests really have any positive effect? Indeed, it doesn't help that there are reports claiming that a man is actually behind the group's Ukrainian mother organization, inciting them to wage naked protests. Such reports only confirm mainstream skepticism about Femen.

The Femen activists in Germany, however, prefer not to comment on such issues. Josephine Witt, for example, says of the alleged Ukrainian mastermind, "It might be that he briefly held the reins." But she and her fellow German activists stress that they founded their branch independently, and that only one of them had even ever spoken on the phone with the mysterious man.

Femen also has no doubts about the justness of one activist's highly criticized protest trip to Tunisia. Josephine Witt, who spent four weeks in jail after waging a protest on behalf of an imprisoned Tunisian activist, says she doesn't regret it a bit. The time in jail was rough, she admits, but she's proud of what she did. "I'd had enough of couch-potato feminism, and I've accomplished more than that with Femen," she says. "The battle continues."

To continue waging their battle against patriarchy, members of the German Femen division, who are mainly university students, need money. The self-proclaimed "sextremists" set up a bank account over the summer in order to solicit donations, which they say are vital for travel and training expenses. But so far, less than €300 ($415) has been deposited into the account.

With funding hard to come by, the women hope that some merchandising will help them with their finances. They recently began making handbags hand-painted with six different slogans, such as "Fuck Your Morals," each of which costs €15, shipping not included. They stress that the bags are made out of "fair trade" materials. And the group says that sales have been good, though they decline to cite concrete figures.

Of course, this only piques the curiosity of those who always suspected that Femen is merely a marketing ploy. But the activists view it as a pragmatic matter. The bags allow their backers to openly publicize their support. Still, the German femenistas don't have any plans to sell what their Ukrainian sisters-in-arms offer: breast prints at $70 a pop.