Europe calls her Madame Non, a moniker which is usually paired with a comparison with the Iron Lady Margaret Thatcher. But back home in Germany, Chancellor Angela Merkel has an altogether different nickname: "Mutti." Or, simply, Mummy. In her own party, she can be a tough disciplinarian, but most Germans, particularly during the last few years of the euro and debt crises, see Merkel as a comforting presence intent on protecting their prosperity.

But can such a model be emulated? The crucial state election in North Rhine-Westphalia on Sunday suggests that the answer might be yes. Social Democrat Hannelore Kraft trounced Norbert Röttgen, of Merkel's Christian Democratic Union, in the vote by a score of 39.1 percent to 26.3 percent. It was the worst-ever CDU performance in the state and resulted in Röttgen's immediate resignation as state party chair.

More to the point, however, Kraft has clearly won over the hearts of her home state and exuded the kind of confidence-inspiring rationality that had been Merkel's exclusive trademark. Röttgen was, to be sure, a clumsy campaigner. But Kraft, governor of North Rhine-Westphalia for the last two years, has become the state's "Mutti."

Equally important, the clear victory for the SPD propelled the party back to the position that it had become accustomed to in the working-class state -- the top. While Kraft led the state in coalition with Green Party state leader Sylvia Löhrmann since elections in 2010, their pairing was an experimental minority government that ended earlier this year when Kraft proved unable to push through her budget.

But now the voters have given her a powerful vote of confidence and Kraft will form the kind of stable, center-left governing coalition that has been a rarity in Germany in recent years. With just one year to go before general elections, Kraft's success promises to boost both her party's confidence and hopes for an SPD-Green governing coalition at the national level.

German commentators on Tuesday, however, believe that the SPD has a long way to go before reaching that goal. Kraft, after all, was quick to reject the notion that she might become the SPD's chancellor candidate in next year's clash with Merkel. That means the party will be forced to choose among its trio of leading personalities: party head Sigmar Gabriel, parliamentary floor leader Frank-Walter Steinmeier and former Finance Minister Peer Steinbrück. None of them, editorialists believe, will be able to exude either Kraft's brand of warmth or the comforting presence that has become Merkel's trademark.

"How can one win an election in Germany? Hannelore Kraft's strategy has proven successful: mother-figure to the state, care-giver, believer in youth investment and a preventive welfare state. These are buzz words which one immediately associates with women, because for centuries it has been women who have cared for others. Up until recently, these were not the kind of words with which one could win an election. They would have sounded fussy. And now two women have gone and won an election in the biggest German state using 'female' political principles. How did that happen?"

"The simplest fact first: The success of women often follows the failure of men. … And Kraft's brilliant success had a lot to do with Röttgen's total collapse. … On the other hand, the 'female policy' of preventative social services represents a smarter approach to the welfare state -- better than the oft-emphasized dialectic pitting dismantlement and expansion against one another."

"In other words, that which was formerly labeled as 'feminine' is now gaining value and losing some of the stigma which it has been subjected to in the past. We will have arrived in a 'post-gender' era when this kind of politics is also successfully pursued by men."

"Hannelore Kraft very clearly emulated some of of Angela Merkel's characteristics. Since almost losing the 2005 election, Merkel knows what voters want: to be governed by people and parties who offer (or at least promise) the most security during difficult times in life, from the smallest hurdle to the largest. They need comfort. It's not for nothing that the leading figures in all parties, including the business-friendly Free Democrats, are all care-giver types. And the care-giver-in-chief, the mother of all Germans, is the chancellor -- and voters pay her back with consistently high popularity ratings. Germans give her great credit for steering the country through the crisis and protecting their prosperity."

"When it comes to next year's campaign, the conservatives will have an easier time of it. They can, and will, continue to base their appeal on the chancellor. Paradoxically, the CDU debacle in North Rhine-Westphalia has strengthened Merkel's position within her own party. On the list of potential successors … only one name remains: Ursula von der Leyen. But Angela Merkel, despite a long power struggle within her party's leadership and an impressive series of poor CDU showings in state elections, has become the matriarch of the party. … When one of the three potential SPD challengers finally does lead the charge against Merkel, they will probably do no better than Röttgen did against Kraft."

"There has been occassional speculation regarding just how much Angela Merkel was in Hannelore Kraft. Both women are individually much more popular than their parties. Both are the personification of the political center, flexible, reassuring, offering a bit of everything and never polarizing. Kraft followed Merkel's recipe to victory. The fact that one can win elections in such a manner is an encouraging signal for Merkel amid all of the current difficulties."

"That leads to the question as to how much Kraft is in Merkel. The largest accordance is their handling of money. Merkel is frequently referred to as the savings chancellor. But she is mostly interested in seeing Europe save -- not Germany. Her rejection of tax cuts is, at the end of the day, hardly comparable to an austerity plan involving deep pay cuts or steep pension reductions. And both women espouse noble motives: Kraft refers to her spending as preventative politics. Merkel claims to be spending so as not to idle the economic motor in the only large European economy that is still growing."

"Angela Merkel and Hannelore Kraft are indistinguishable in their gentle treatment of voters. As such, when the general elections roll around next year, the SPD will find no success in attacking Merkel head on, just as Röttgen failed with his attacks on Kraft. In France, François Hollande had an opponent -- Nicolas Sarkozy -- who he could easily demonize, and could even openly show his disgust and hate for the incumbent. Hollande could run a typically leftist campaign. It seems unlikely, however, that such a strategy would lead the SPD to success."

"In Hannelore Kraft, Röttgen had a challenger who possesses in copious supply all the qualities he himself lacks: she knows how to portray herself as an ordinary person and how to appear to care personally about the smallest of problems. She approaches people…. And she does it all with surprising freshness. In hindsight, Röttgen pulled the short straw with such an opponent."

"The fact that the CDU, under Röttgen's leadership, failed so dramatically has deeper, more unnerving causes. In North Rhine-Westphalia, a dream has overridden reality. One year ago, the constitutional court ruled that the 2010 supplementary budget put forward by the SPD and the Green Party was unconstitutional: a singular occurrence in the history of postwar Germany. But that didn't slow down the 'queen of debt.' As if she had never heard of the dilemmas facing the welfare state, she stuck undaunted to the Social Democratic philosophical principles of the past. And she really believed in her ability to market renewed borrowing as start-up funding for future growth and development. It is worrying that Röttgen could not even challenge her on that front."

"One thing is clear: The campaign for the 2013 national election effectively began on Sunday. From now on, parties will only use a single criterion when making decisions: what will it mean for their prospects next year. The considerable difference between Merkel's governing coalition and the opposition is that as of Sunday, the former is on the defensive role while the latter can attack."

"Angela Merkel's as yet unbroken popularity has a lot to do with her role in the euro crisis. Germans see her as an engaged crisis manager without having to feel the consequences of her policies in their own lives. On top of that one must consider the healthy economy and decreasing unemployment. So far, there is no great cry for a new chancellor. Merkel, in her seventh year in office, is showing no signs of withdrawing from the people but is remaining rooted instead." 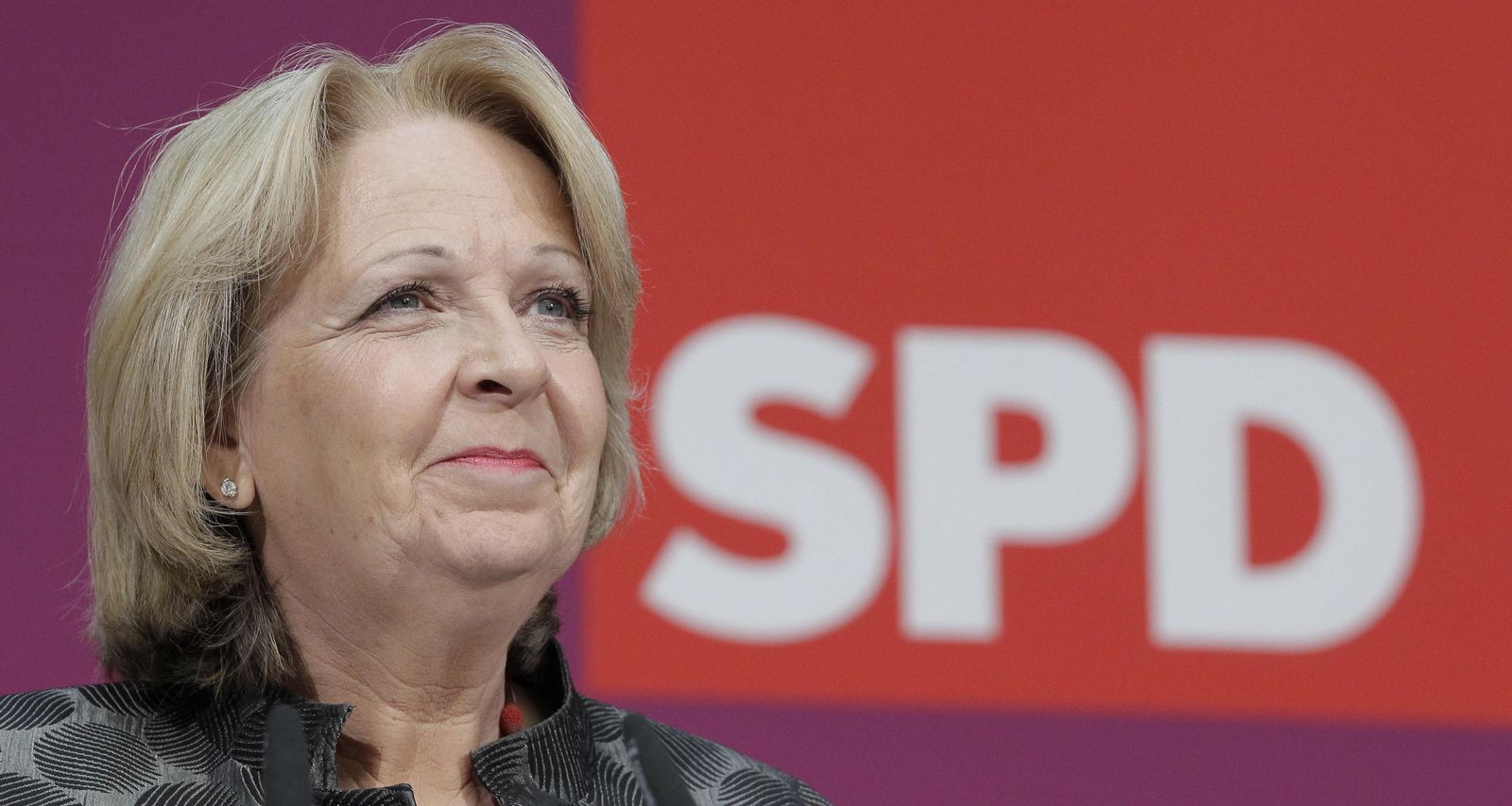