If you're planning to visit Europe's largest animal refuge in Falkenberg, Berlin, be sure to put aside plenty of time and bring a hardened heart. You'll find pens full of horses, sheep and even a Vietnamese pot bellied pig alongside a cattery three times the size of your average gym and a veterinary clinic that is bigger than most provincial hospitals. The refuge, which has 120 staff, is already as big as 30 football fields -- but soon it will need even more space.

The problem is that currently the refuge is dealing with a whole new breed of animal refugee, one that nobody had ever encountered before. Up until recently, most of the animals that ended up here were either orphans, strays or had been taken into custody because they were not being looked after properly. But today there's a whole new influx of beasts and they're coming to the refuge because of some distinctly human problems. Their German owners are no longer able to afford them for a variety of economic reasons, maybe because they are on a pension or drawing the reduced Hartz IV long-term unemployment benefit and neither will stretch to vet bills or pet food. Over 1,600 animals live in the Falkenberg animal refuge at the moment -- and that's 400 more than at the beginning of 2008.

This is not only happening in Berlin. Animal homes in Munich, Düsseldorf and elsewhere around Germany report that more animals are being given to them due to the owners not being able to afford food or vet bills. Wolfgang Apel, the president of the German Animal Protection League, believes that this year around 400,000 poverty stricken pets will need to be cared for by animal refuges, which is around one and a half times more than a decade ago. Additionally, more animals are simply being abandoned in the vicinity of the refuges -- this means that the owners don't have to pay the fees that are normally required when an animal is given to the home.

For example, animal refuge employees found a box of chinchillas in Münster, a miniature pig and piglets in Bochum and, in Schlage near Rostock, two terriers with handwritten tags around their necks that said: "Unemployment Beneficiary."

Unfortunately in some cases, you can see how little thought people have put into buying pets, says Norbert Schlösser, the head of Schlage's animal refuge. They need to be aware that an adorable little St. Bernard puppy is going to grow into a 90-kilogram monster with a big appetite and a tendency to suffer from hip problems, he argues. Despite this Schlösser says he knows of several families who are struggling financially but who still keep more than one large dog.

An Unemployment Benefit For Dogs

At the same time that animal refuges are dealing with an influx of animals, Apel reports, the amount of donations to the refuges is also decreasing massively. Which puts the future of large facilities like the one in Berlin at risk. The Falkenberg refuge requires €10,000 ($14,260) daily, a fact that is prompting an increasing number of calls for political assistance.

And Apel has another idea that might stop the flood of animals from broke homes reaching the refuges. He suggests that Germans who are on the Hartz IV long-term unemployment benefit, which is substantially smaller than the short-term employment insurance, could get a little additional money for their dogs -- but only if those dogs were part of their household before they started on social welfare. But German Labor Minister Olaf Scholz of the Social Democrats (SPD) has ruled this out. He sees no reason to change the system that already exists. At the moment only beneficiaries who are blind and require a seeing eye dog, or those who need a dog for psychological reasons, can claim extra money from the state for their pets.

Any unemployed Germans who have tried to get support for their pets without such medical reasons have been unsuccessful. In fact, in March, judges in Giessen, in the state of Hessen, decreed that there would be no additional support for dogs living in the households of the unemployed. And the social welfare court in the city of Dessau-Rosslau in the eastern state of Saxony-Anhalt decided that pets would not come into consideration when it came to housing allowances. Housing allowances are part of the long term unemployment benefit and depend on the size of the house that the unemployed person is living in. The court's decision came about when one unemployed woman felt that another was advantaged in her housing allowance by the fact that she had children whereas nobody cared that the first woman had a dog and also needed more room. The court disagreed. And their decision also means that if, for financial reasons, a beneficiary is forced to move into a smaller home that forbids pets they will simply have to give up their animals.

This was one of the motivations behind the Animal's Dining Table, a project founded by 45-year-old computer programmer Claudia Hollm three years ago. The initiative started as an afterwork hobby but has since turned into a full-time occupation for the resident of the state of Brandenburg. Currently there are 24 branches of the charity, which distributes free pet food throughout Germany. More are likely to be established in the near future.

"More are urgently needed," Hollm says. Because it doesn't matter where the Animal's Dining Table sets up, there are always a great number of takers. In Hollm's hometown of Rathenow alone, population 24,000, around 2,400 pet owners have already shown themselves eligible to receive the free pet food because they are either long-term unemployed or living on a pension.

Among them is Matthias Petter, 32, and his two-year-old son Malte-Richard with their large bulldog, Snoopy. His dog "only thinks about food and sleeping," Petter says when the trio arrives at the Animal's Dining Table counter to collect some pet food. Thanks to the charity, Petter is now saving an extra €30 ($43) a month. That money came in handy when Snoopy recently suffered from a tick infection and needed medicine. "It also means there's more money left for the little one," the unemployed truck driver says, indicating his son.

Hollm is trying to help pet owners who have cared for their animals for years already. She's a little more reluctant when it comes to the unemployed or beneficiaries who want to get a new dog, or get another pet. A pet is good therapy for someone who is unemployed, "because they support you even if you don't have a job," she explains. But owning a pet creates new costs that the prospective owners can't even guess -- and that's why someone coming to the Animal's Dining Table with a puppy -- like the young men in Berlin often do, with the offspring of their fighting dogs -- is not welcome. 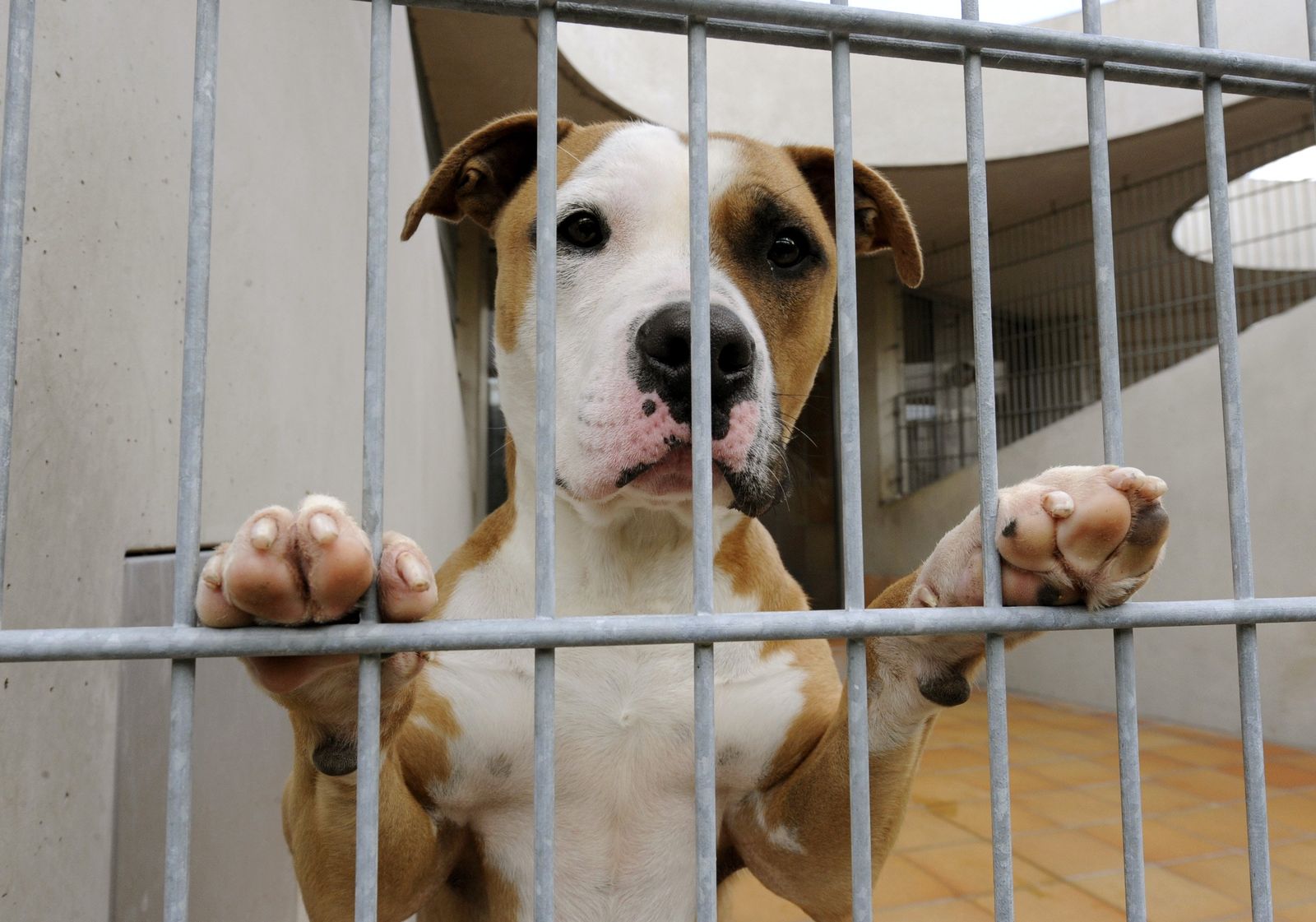 Sad at a Berlin animal refuge: The global financial crisis is affecting Germany's pets too.