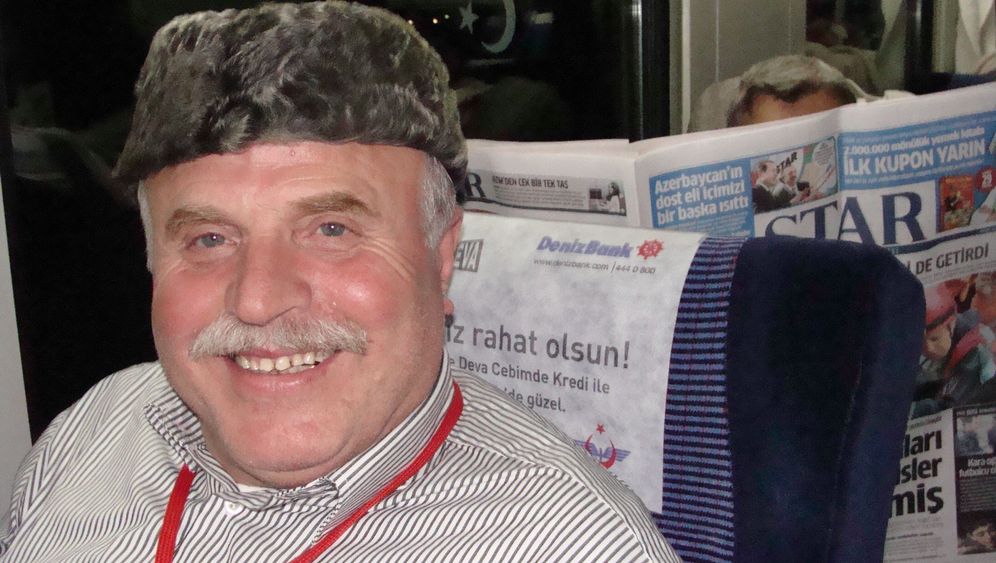 Photo Gallery: A Ticket to Deutschland

"Don't worry if the train leaves without you," the man from the travel agency says. "It'll come back again. That's just for the TV crews, because they need to film the farewells twice." The two older men who just asked me what Ayben, the female rapper jumping around on the stage, has to do with their history, are getting nervous.

We stop chatting and watch as our fellow passengers board the train, waving enthusiastically under the direction of journalists and tour operators, camera crews and photographers. It is a trial-run farewell.

Slowly, the train begins to move. Heartbreakingly melancholy music plays and a screen behind the stage continues its slideshow of photographs of Turkish guest workers in Germany in the 1960s and 70s. The immigrants moved to Germany to help fuel the country's Wirtschaftswunder economic miracle in the decades following World War II.

Most of the eyewitnesses reunited at Istanbul's Sirkeci Train Station this sunny fall day are not particularly impressed by the staged nostalgia.

A 70-year-old retiree who has joined our group, and whose nametag identifies him as Ahmet Yetis, laughs when I ask if he's looking forward to the upcoming journey. "It's not as exciting today as it was 50 years ago," he says. "Back then, we were young and naive and we didn't know what to expect." He drops his voice, as if speaking confidentially, and whispers, "Actually, these days I prefer flying. It's faster and more comfortable. Back then, we didn't have any choice."

A short time later, I'm sitting in a compartment and skimming through the biographical summaries of the trip participants. As the train passes the remains of Istanbul's historic city wall and the dismal, densely developed residential areas on the edge of the city, I try to find connections between the stories of the 35 Turkish-German retirees with whom I will travel for the next five days, and my parents' story.

Are there men here who left for Germany the same year as my father Ismet? He boarded a Munich-bound train at Sirkeci Station in 1973, later than most others. Ismet Ergin, 29, was a tailor from Alanya, then still a sleepy Mediterranean town in southern Turkey. He snatched up one of the last possible tickets to Germany, just before guest worker recruitment ended in November of the same year.

Is there anyone on the train from the same region as my parents? No, but I do find one passenger, Nuri Yilmaz, who arrived in Munich in 1968 and was then sent to work in Lübeck, just like my father.

I make my way through the compartments, getting caught up in countless conversations along the same lines: How does it feel to re-enact the journey that once led to a new life and a new home? What memories surface as the train stops, as they recognize the stations we pass, as they talk with their fellow travelers?

Nearly everyone on the train is repeating their original journey for the first time. In the 1960s and 70s, anyone who wanted a work permit for Germany first had to come to the German liaison office in Istanbul to be examined for physical eligibility. Those deemed strong and healthy were generally sent to Munich on the next train. After that initial train journey they always went by car when they returned to Turkey on vacation. That was the cheapest way, and also offered the unbeatable advantage of being able transport an almost unlimited amount of luggage in both directions.

Sebahattin Cosar, 69 and originally from Bayburt in northeastern Anatolia, tells me they called the train to Germany "kara tren," or "black train," not only because the old steam engine coated everything in soot, but also because so many of the men on the train were grieving over leaving home and afraid of the unknown. He cried a great deal and spent the entire train ride thinking about his wife, whom he had to leave behind, Cosar tells me.

It sounds like a sad trip, I think, as fields and a sparse landscape pass by and we approach Edirne, a city in western Turkey on the border with Bulgaria.

Then, I meet Fehmi Atar, a man with light brown hair, blue eyes and rosy cheeks, who wants to pose for a picture in his Georgian fur hat and bursts into hearty laughter after every other sentence. The train ride was a blast, he says. Many of the travelers had brought instruments, and they played music and danced and looked forward to unaccustomed freedom. "We were all in our early 20s and leaving home for the first time," he explains.

It sounds like a fun trip, I think. Then the train stops: We've reached the Bulgarian border. And for the first time since this journey began, I have my own memories.

Every summer until I was 12, we drove to Turkey for vacation. That meant three endless days in the backseat of the car, plagued by motion sickness, boredom and my older brother's teasing. We didn't take real breaks, because my parents didn't see any reason to waste valuable vacation time or additional money in backwards Balkan countries, where they were kept busy bribing border guards and traffic police.

Instead of staying in hotels, we made brief stops at service areas, where we generally stuck with other Turkish families, who were just as afraid of Yugoslavs and Bulgarians as my parents were. Bulgaria in those days was notorious among Turks who traveled through the country. Turkey's destitute neighbor was considered corrupt and dangerous, while its people were seen as criminals. I never really understood where exactly this aversion came from. But I have clear memories of the "routine check" at the Bulgarian border, in which the customs officials unhurriedly took our car apart, unscrewing the back seat and, to my outrage, even carefully inspecting my toys, all because my father had accidentally slipped the wrong denomination of money into our passports.

"Well, and now they're in the EU and we're not," chuckles Fehmi Atar, as we wait inside the train for our passports to be processed as a group, passing the time by telling each other our stories of the Bulgarian border decades ago.

When we arrive at our hotel in the city of Plovdiv in western Bulgaria late in the evening, I call my mother in Germany. "What do you mean, you're staying in a fancy hotel in Bulgaria?" she laughs. "That's not an authentic trip!"

Following her father's path from Turkey to Germany, writer Yasemin Ergin discovers in the second part of her series on so-called guest workers that many found more than just jobs. Some also found true love.

Once, Mustafa Kazanci recalls, a student gave him some garlic cloves as a gift, utterly convinced that he, being Turkish, would appreciate this more than chocolates. A member of the Turkish Parliament for the ruling Justice and Development Party (AKP), Kazanci is sitting in the train's conference car and relating anecdotes from Germany, where he worked as a Turkish teacher in the early 1980s. The Germans were nice, he says, but unfortunately they were also hopelessly burdened by prejudice.

It's possible that scene really did play out the way Kazanci describes. Turkish eating habits were indeed considered quite exotic in 1980s Germany. Still, the politician's recollections strike me as highly exaggerated versions of the stories my parents liked to tell about their first years in the country. But as the train rolls on from Istanbul to Munich, there will be plenty of time for anecdotes.

We reach the Serbian border. The train stops and three Serbian officials sit down in the dining car in front of a stack of Turkish passports. On our trips to Turkey, my parents never let their passports out of their sight for a second. This was not only because they contained such valuable items as their German work and residency permits -- a couple years later upgraded to a right of residence, granted indefinitely -- but also because every year, new horror stories circulated among the Turks in Germany who vacationed back home. These included families who ended up stranded at the Austrian, Yugoslavian or Bulgarian border because they had been careless with their passports.

I sit down next to Nuri Yilmaz, a 69-year-old retiree from the northern German city of Lübeck. He doesn't know my father, who arrived in the same city a few years after him, but he does know Schlutup, the old fishing village on the outskirts of Lübeck where I spent the first half of my childhood.

For him, the decision to go to Germany wasn't so much about the money, Yilmaz tells me at some point in our conversation. His brother, already in Germany, sent Nuri and his cousin a letter that included the following: "It's really nice here. German women go to cafés, and talk to men. You should come too."

"I was 21 and just back from my military service," Yilmaz says. "Of course that letter aroused my curiosity. I was very good-looking in those days, and figured I had good prospects."

To prove this to me, he digs out a photograph of himself as a young man. Almost everyone on this trip has brought similar pictures. It's almost as if they think no one would otherwise believe they were once so young. 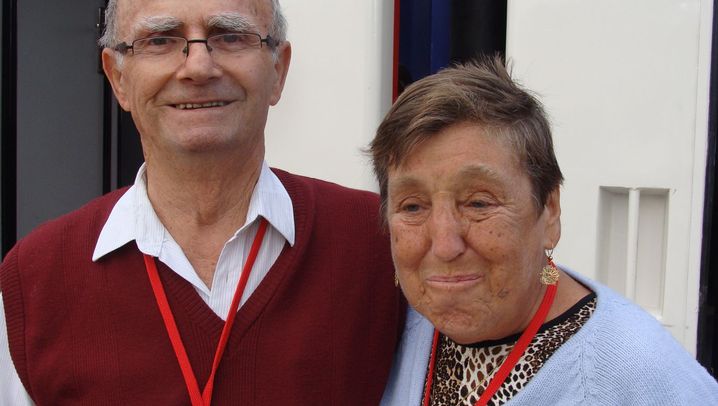 A few words of German, a new suit and a friendly smile were enough. Nuri Yilmaz found it easy to meet women in the city's "dance cafés", establishments that offered food and dancing. He even had a child with a German woman, but the relationship didn't last long. After they separated, the young man gave in to pressure from his father and married a woman from his hometown.

German women. Sooner or later, they were a topic for nearly all of the men on this train. For some, they still are. Ferhat Dursunbek, one of the liveliest passengers onboard despite his 76 years, met a woman named Ingeborg in Berlin in 1969, at one of a chain of restaurants called "Wienerwald" -- and has been with her ever since.


Ingeborg is accompanying Ferhat on this trip, but she mainly hangs back shyly while her husband entertains the others in the main compartment. Then there's Nedim Sekerli from the northern German town of Quickborn, who complains about Germany often and with gusto, seemingly still homesick to this day -- but won't hear a word against his German wife, whom he married in his hometown in Turkey in 1967.

My parents were already married when my father came to Germany, but my mother didn't follow him until over a year later. Pictures from those days show a very attractive young man, and I suddenly find myself wondering if my father ever went to the same cafés as Nuri Yilmaz.

Later, I come across Sebahattin Coskun again, the man who described to me on the first day of this trip how badly he missed his wife when he boarded the train in Istanbul all those years ago. His German was enough to get by, he says, but he never really mastered the language. Coskun casts an amused glance toward Ferhat Dursunbek, conversing loudly two tables away, and says, "The only ones in our generation who speak really good German are the ones who got involved with German women right away. Nobody's ever improved their German working on an assembly line."

Sounds plausible, I think, as we finally pull into Belgrade.

My father, incidentally, never spoke particularly good German either. Did my mother realize, when she arrived in Germany, what a good sign that probably was?