Six years ago, after Joseph Ratzinger was elected pope, the German newspaper Bild bore the front-page headline "We Are Pope." A legendary headline was born -- but nothing more. It soon became clear that Germany was not on the verge of a new age of Catholicism. Rather, the headline was little more than a battle cry for a hoped-for wave of patriotism regarding the new German pope.

Nothing against national pride, but it's a sentiment that has little to do with a real spiritual revolution. That kind of revolution would look very different -- and would last much longer.

The fact that critics today are vehemently railing against the pope has a strikingly simple explanation: The man has remained true to himself. Many are calling for the pope to adapt himself and his church. He should pay attention to the survey results, they argue, showing that many German Catholics want reforms. He should listen to the critical theologian Hans Küng and the reform movement in Austria, they continue, where hundreds of dissident priests are openly calling for change. But the pope reacts to it all by saying, just like Martin Luther before him: Here I stand. I can do no other.

Indeed, even if he wanted to, he couldn't. He already said as much in his beautiful address on German public television on Sept. 17 ahead of his visit to Germany. Instead of reforms, he talked about the invisible God whose presence shines through in reason, in beauty, in the saints and in all of us. During the address, he looked a little frail, as if he viewed his visit to Germany as a last battle.

Benedict XVI is the embodiment of resistance to the idiocies of today, when the obsession with ratings and sex are more important than any article of faith. But he performs that role with a soft voice and the steadfastness of a deeply religious man. And he binds the loyalty of those people who stand with him in opposition -- some 1.2 billion Catholics in the global Church -- and who are often ridiculed as idiots for doing so. They are true to the words of the apostle Paul: "God hath chosen the foolish things of the world."

In his last Mass before he was elected as pope, Cardinal Ratzinger preached against the "dictatorship of relativism" and the ideology of "anything goes." Today, many observers regard that sermon as a pre-emptive statement of the approach he would take as pope.

When he addresses the German parliament, the Bundestag, on Thursday, the pope will not make any grand statements of doctrine, but he will talk about basic issues. He will probably remind Germans of the society's Christian and Jewish foundations. And he will talk about God in his own special mix of astute analysis and accessible, pious simplicity. Pope Benedict's deep Catholic secret is his directness and clarity.

But is he proselytizing, as some members of the Bundestag, such as Rolf Schwanitz, the spokesman of the "Secularists in the Social Democratic Party" group, have claimed? Yes, dear Bundestag members, he is proselytizing. One should expect nothing less from the pope.

He is not proselytizing by the sword, however, but through the word. It is not the kind of proselytizing that relies on the threat of imprisonment or murder should you try to flee, of the kind that Schwanitz himself will be familiar with from his time in communist East Germany. The man who will address the Bundestag is an old, white-haired man who is protected at home by Swiss Guards bearing halberds. Schwanitz should not be afraid. Neither should his fellow members of the SPD who have protested against the pope's address, nor should the atheists of the far-left Left Party who had no problem applauding Vladimir Putin when he spoke in the German parliament while his tanks were rolling into Chechnya. This is the same Left Party that recently sent a congratulatory telegram to Fidel Castro promising him the unwavering loyalty of the party.

In the cacophony of parliamentarians who have been making their opinions known in the German media, one stood out in particular. It was Pascal Kober, a Bundestag member for the liberal Free Democratic Party who is also a Protestant minister. He told SPIEGEL ONLINE that he expected the pope to deliver a speech that "strongly counters the increasing trivialization of the Christian message into a feel-good religion."

It was an amazing remark, and amazingly brave, coming as it did from a -- sorry -- Protestant. I recently took part in a television talk show with Nikolaus Schneider, the head of the Protestant church in Germany, during which we talked about ecumenical Christianity. Many Protestant members of the audience derided the pope because of his supposed pomposity and condemned everything Catholic -- such as the celibacy requirement and an all-male priesthood -- with the argument that it is behind the times.

Ecumenical Christianity of the kind that people demanded that evening would involve, it seems, giving up everything that is Catholic. It would be an ecumenical Christianity in which, for example, the two gay priests who were suspended for their plans to commit an ostentatious act of rebellion against Rome by celebrating mass in Berlin would be welcome. Not that there wouldn't be certain Catholics who would support such a thing -- and probably many Catholics at that.

Why? Because liberal Protestantism has today become the dominant ideology in Germany. It has become the hymn book of feminist, environmentalist, multiculturalist, gay-friendly, anti-capitalist do-gooders. And this ideology will not tolerate any deviation. In a recent interview with the heavyweight German weekly newspaper Die Zeit, the Catholic reform theologian Saskia Wendel suggested that the authorities might have to clamp down on "traditionalist" Catholic groups if they have "anti-democratic attitudes."

In an insightful opinion piece for the newspaper Süddeutsche Zeitung, Stephan Speicher referred to the so-called Kulturkampf ("culture war") which took place in Germany around 150 years ago and involved the Prussian state attacking the influence of the Catholic Church. Speicher talked about the "aggressive liberalism" of the time that "backward" Catholics were attacked with even more fiercely than today. The battle lines then were clear: Prussian Protestants against Roman Catholics.

At the time, the liberals portrayed the individualist modernity of the late 19th century as being contrary to the institution of the Catholic Church. It was a conflict that peaked in the confiscation of Church property and the mass arrests of priests. Uniquely, it was a brand of modernity that paired reformative theology with German idealism. Protestantism, in other words, had subsumed itself to the zeitgeist of the period: nationalism and Kaiser Wilhelm.

German pride and anti-Roman defiance -- It is a combination with something of a tradition, at least since Luther held forth against the "Italians," as Herfried Münkler demonstrated in his book "The Germans and Their Myths." Indeed, the "battle against Rome" was a constant component of Germany's recent, disastrous history. Under the Nazis, the so-called "German Christians" were considered reliable party members whereas the Catholics, oriented as they were toward Rome, were considered by Propaganda Minister Joseph Goebbels to be "hostile elements."

Political definitions of loyalty to the state, of course, are irrelevant. Today, Protestantism merges perfectly with the dominant cultural ideology, which largely consist of a mixture of anti-Roman reflexes and eco-babble. But now, it is a zeitgeist that has become attractive to reform-minded Catholics. They finally want to belong to the center of society.

Interestingly, it is precisely Protestants like Bundestag member Kober and the Christian Democrat Erika Steinbach who are uncomfortable with this trendy religiosity. They speak of the pope with the utmost respect and admire him for being one of the last great non-conformists. It is a message that one can hear frequently from Protestants.

The new culture war is thus no longer being fought between Catholics and Protestants but, rather, between the societal centrists, on the one side, and the staunchly religious, on the other. Just as there are plenty of reform-minded Catholics attracted by the zeitgeist, there are also many Protestants who are unnerved by the lack of religious gravity.

Pro-reform Catholics in Germany will likely have little choice but to leave the Church. But is it such a stretch to imagine orthodox Lutherans seeking readmission into the Catholic Church as Anglican bishops and adherents have done?

The culture war is entering a new phase. And the pope will give something to each of the camps. 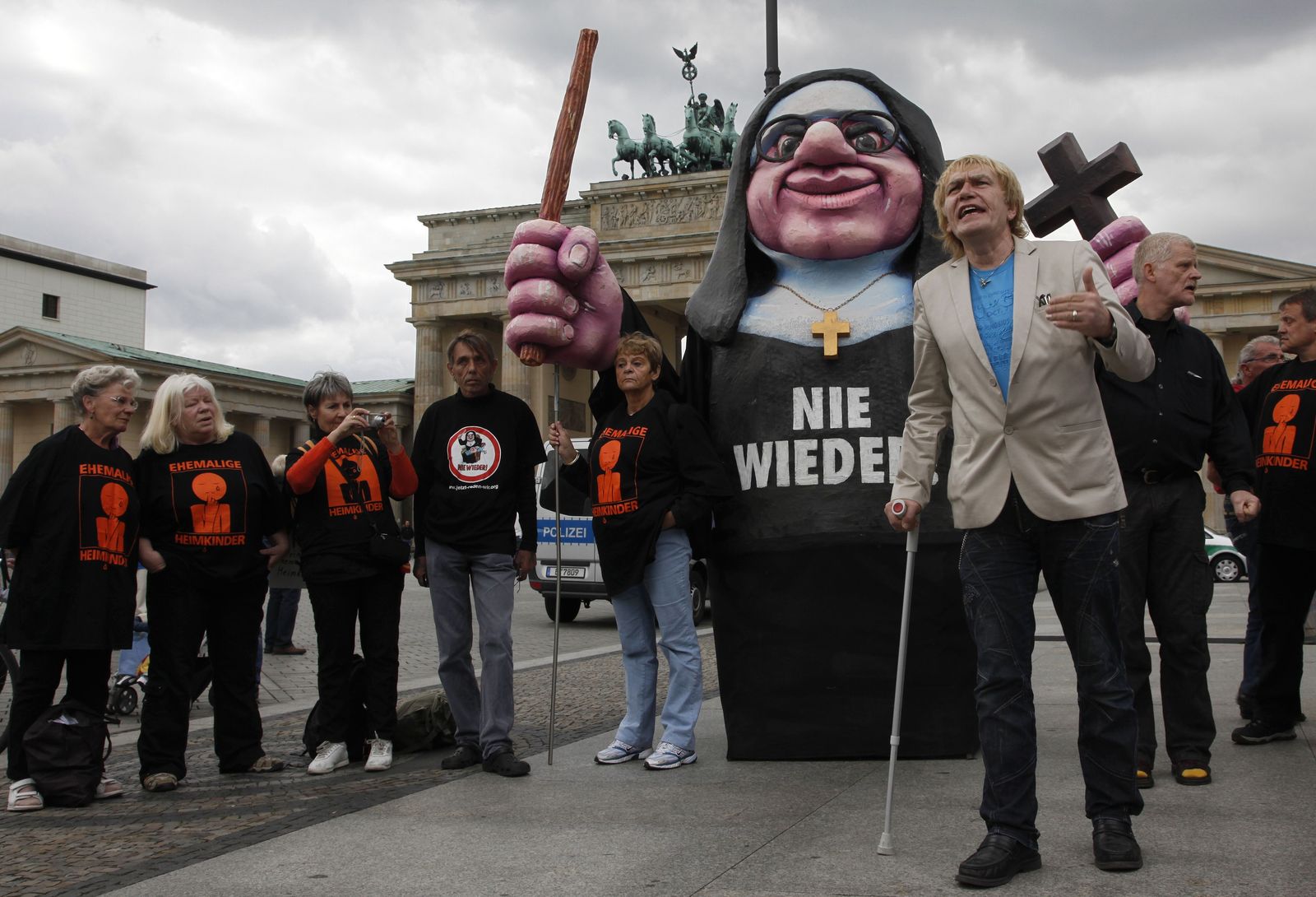