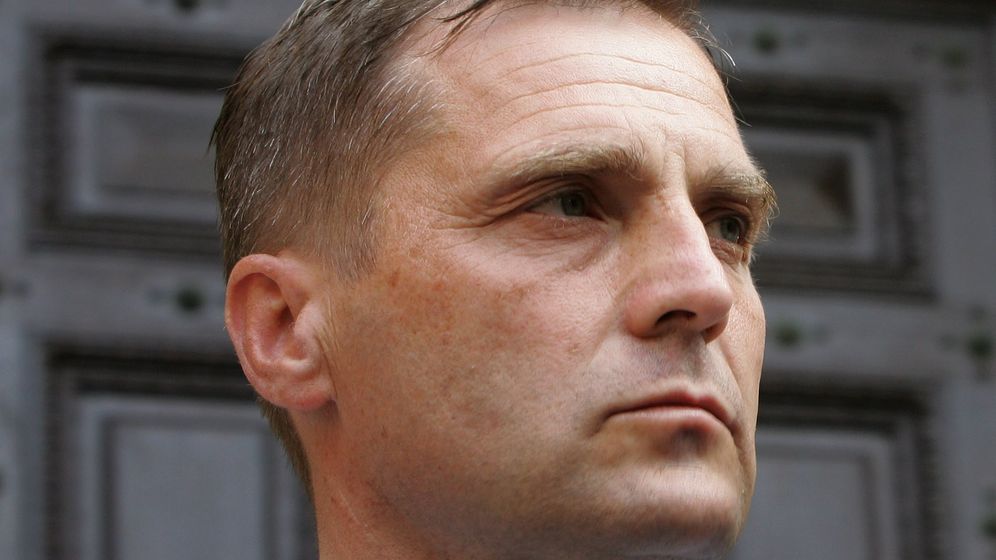 Neo-Nazis have been left to thrive in the northeastern German state of Mecklenburg-Western Pomerania, where the far-right National Democratic Party (NPD), which includes prominent members who have glorified the Third Reich, won up to a third of the vote in some districts in Sunday's regional election, say analysts and anti-racism groups.

Far-right supporters are firmly ensconced in rural communities, where they staff the local fire departments, run leisure activities for young people and even provide citizen's advice for welfare claimants. They live in a vacuum, in small towns and villages abandoned by mainstream democratic parties and by overstretched, underfunded local authorites, and are often free to express their ideology unhindered by the police or courts.

The village of Jamel, dominated by neo-Nazis, is a case in point. A signpost by the roadside shows the distance to Hitler's birthplace in Braunau am Inn. A reporter recently recorded a video of a rusty barbecue inscribed with the words "happy holocaust" -- a flagrant breach, many would argue, of Germany's tough laws against incitement to hatred. But there it stands, behind a barbed-wire fence in the garden of the local NPD office.

The NPD won 6.0 percent of the overall vote in Mecklenburg-Western Pomerania on Sunday, enough to remain represented in the state parliament for a second five-year term. The NPD, which has five seats the Mecklenburg parliament, has been described by the German domestic intelligence agency as being a "racist, anti-Semitic, revisionist" party bent on removing democracy and forming a Fourth Reich. However, the party has not yet succeeded in landing any seats in the federal parliament, the Bundestag.

In Mecklenburg, Social Democrat state Governor Erwin Sellering, who was re-elected, called for a renewed attempt to outlaw the NPD and said his state was on the front line in the fight against right-wing extremism. "We're waging a proxy war," he said on Sunday.

It was a cry for help that fell on deaf ears in Berlin, where Chancellor Angela Merkel poured cold water on prospects for an NPD ban on Monday, after a previous attempt failed in 2003 due to procedural errors. In a tepid response to the NPD's return to parliament for a second term, she described the fight against the party as a "long-winded process" and declared that its decline in support to six percent from 7.3 percent at the last election in 2006 was a "slight ray of hope."

Hajo Funke, a prominent analyst of the far-right in Germany, begs to differ, and points out that there is no downtrend. The NPD got more in support in Mecklenburg on Sunday than it did in the state of Saxony, its other major bastion, in 2009, where it scored 5.6 percent, down from the staggering 9.2 percent it won in 2004.

Parliamentary representation is hugely important to the NPD because it provides it with access to public funds, allows it to build up a professional staff and gives the party a bigger platform from which to espouse its propaganda. Worst of all, it gains a veneer of respectability.

"For 15 years, until just before the 2006 election, the democratic parties and the general public failed to combat the far-right in Mecklenburg-Western Pomerania," Funke told SPIEGEL ONLINE. "Too little is still being done. There are many examples where the police and courts are slow or sluggish in reacting to far-right crimes, or don't take action at all."

The NPD in Mecklenburg is even more extremist than its other regional divisions because it has allied itself with neo-Nazi groups in the state.

Mecklenburg's NPD leader Udo Pastörs was convicted of incitement to racial hatred and received a 10-month suspended sentence in 2010 for a speech he gave in southern Germany, in which he described Germany as a "Jew Republic," labelled Turkish immigrant men as "sperm cannons" and called US economist Alan Greenspan, the former head of the US Federal Reserve, who is Jewish, a "crooked nose."

In one speech to the Mecklenburg parliament on Jan. 28, 2010, he criticized the other parties for holding a ceremony to mark the 65th anniversary of the liberation of Auschwitz on Jan. 27, 1945. He called it "nothing other than planting your Auschwitz projections on the German people in a cunning and brutal way."

"Ladies and Gentlemen, the spiritual liberation in this area may only be possible for us Germans after the downfall of the historical epoch of the Federal Republic, but it will come," said Pastörs.

Mecklenburg-Western Pomerania is fertile ground for the far right, with an unemployment rate of almost 12 percent, well above the 7 percent national average, and little industry to speak of apart from shipbuilding, green power generation and tourism.

"The northeast of the state is socially and economically neglected, has high unemployment and very violent Nazi groups, and the democratic parties have shown little presence there," said Funke.

The former communist east of Germany suffered chronic depopulation after unification in 1990 triggered by an economic slump. Mecklenburg was particularly hard hit. A generation of sullen young men has found solace and company in far-right groups.

The Mecklenburg port city of Rostock saw Germany's worst post-war anti-immigrant riots, in August 1992, when hundreds of extremists attacked a building housing asylum-seekers with Molotov cocktails, watched by neighbors who applauded them. Rostock marked the start of a wave of xenophobic attacks across eastern Germany where foreigners were seen as scapegoats for the upheaval that followed unification.

The state, Funke argues, is still paying the price for never having properly tackled the origins of that outbreak of hatred.

"NPD members have established themselves as upright citizens, as providers of social services. They're the ones organizing public life in local communities," he said.

The SPD-led government and many publicly funded anti-racism initiatives have been trying to combat the trend in recent years. In 2010, the state's social affairs minister, Manuela Schwesig, resorted to decreeing that all kindergarten teachers should swear an oath of allegiance to Germany's democratic constitution -- because NPD members were starting to get involved in the running of child-care facilities.

The per-capita incidence of violent far-right crimes in Mecklenburg is the fifth-highest among Germany's 16 states, according to figures from the domestic intelligence agency, the Federal Office for the Protection of the Constitution. The four states with higher crime rates are all in eastern Germany.

Satirical campaigns against the far-right by pro-democracy activists ahead of the Mecklenburg election made headlines, but appear to have had little effect.

Parties Have Given Up Rural Areas

"For the situation to improve, the region needs a real economic turnaround, and a more vigorous confrontation and isolation of far-right ideology, everyday racism and the NPD," said Funke. "And the justice system must take firmer action against far-right violence."

Ingmar Dette, an anti-Nazi campaigner based in the town of Anklam, a notoriously far-right part of the state, said the mainstream democratic parties were partly to blame for the NPD's strong showing on Sunday.

"They focused too much on campaigning in the cities," Dette told the Hamburger Abendblatt newspaper. Parties needed to do more to reach out to people in rural areas.

In the village of Koblentz, population 200, the NPD won 33.3 percent after being virtually the only party to bother to hang up campaign posters.

The placards, such as "Stop the Polish Invasion" and "Criminal Foreigners Out" -- with the word "criminal" printed in small letters -- are so offensive that they are threatening tourism, one of the state's most important industries.

Foreign visitors to Mecklenburg, famous for its scenic Baltic coastline and its lakes, have been shocked by the sight of them. Attractions in the state including the city of Stralsund, a UNESCO World Heritage site, and the island of Rügen, are major draws for tourists. And the Heiligendamm resort near Rostock was the site of the 2006 G-8 summit hosted by Chancellor Merkel.

"We can't project a cosmopolitan image if there are posters in almost every village saying "Foreigners Out," said Wolf-Dieter Ringguth, the chairman of the Mecklenburg Lakes Tourism Federation. "Many hotel owners have had to explain to their guests that the number of posters in no way relates to the number of voters."

Many hotel owners have even called for future elections in the state to be held in the winter, outside the tourist season.

Meanwhile, the ruling SPD has pledged to get more aggressive in tackling the NPD in the future. "Whenever they open a citizen's advice office, we've got to open an office countering them," Sönke Rix, spokesman for the party's anti-Nazi working group, told Frankfurt Rundschau newspaper.