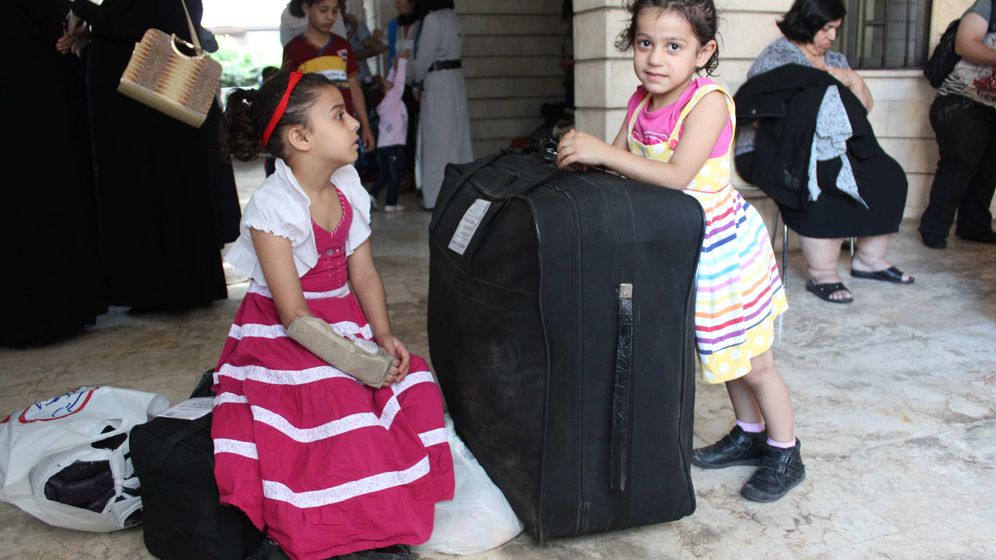 Photo Gallery: An Entire Life in a Suitcase for Syrian Refugees

Noura doesn't want to smile -- not at all, regardless of how hard her father tries to convince her to.

"Look at all the cameras," he says.

He had her put on her nicest dress, one that she still has even a year and a half after fleeing the civil war in Syria. It's red, with white stripes. The other children gathered here are also wearing their nicest clothes. Boys are wearing black suits or, at the very least, a clean t-shirt. It's like they're going to some kind of festive occasion.

"But we don't really know what is happening here," says one of the fathers. "Is it a happy moment or a tragic one? In any case, it's a goodbye, and possibly forever."

The atmosphere is a strange one on this Wednesday morning at 7 a.m. as 107 Syrians meet at a gathering point in Beirut, the Lebanese capital. By afternoon, they will become the first contingent of Syrian refugees to be officially taken to Hanover, Germany. Last year, the German government said it would take in 5,000 Syrian refugees. After bureaucratic confusion over who could come and from what country, 107 of the more than 700,000 registered and around 1 million total Syrian refugees in Lebanon alone, are now coming to Germany. Originally, 149 were slated to travel on Tuesday to Germany, but several injured Syrians can only be transported lying down. The charter aircraft being used on Tuesday wasn't equipped to carry them.

Khalid Ibrahim, an industrial electrician, says he doesn't know much about Germany. But he doesn't care. "Let's just move on from here," he says. Ibrahim comes from Qusayr, a devastated small town near Homs, that was retaken by the regime in what it considered to be a major victory. He now seems relieved, but Noura, his five-year-old daughter, doesn't want to smile.

The only members of her family she has left are her father and her younger sister Nada. A rocket killed her mother, her grandparents and a cousin. Her forearm was shattered by shrapnel and it is still placed in a cast. "I was opposed to the regime, but I never went to a protest," father Ibrahim recalls. "I was too afraid." But that didn't prevent a rocket from hitting their house in March 2012.

Khalid sums up his situation by saying his life is the only thing he "has" left. "I had a house, a car, a job and a family," he explains. "Now I have only my two daughters. I will stay in whatever place offers them a good life."

In Beirut, the three lived in a tiny cellar where he was responsible for turning the generator on and off every few hours during power outages. "The water constantly dripped from the air conditioning above -- it was terrible," he says. "I've read that Germany needs electricians? Is that true?" he asks the journalist.

Each refugee over two years of age is permitted to bring a single suitcase weighing a maximum of 20 kilograms (44 pounds) with them to Germany, but some don't even have that much. Others push baggage carts that are overflowing with belongings. A toy gun that a young boy doesn't want to leave behind teeters at the very top of one luggage cart. After all, what game does a child play during a time of war, if not that of war itself?

Few here really know what their new lives in Germany will hold for them. It'll be strange, probably cold and peaceful, but what else should they expect? An acclimatization course prepared for the refugees had to be shortened from three days to two because of the insistance that the flight be completed prior to Germany's national election on Sunday, Sept. 22.

But even just the two-day "intercultural training" offered to the families sparked animated debates among them. None, for example, had ever heard anything about the right to same-sex marriage. And the information that women in Germany work and are given the right to self-determination seems to please the six teenaged daughters of a one-armed former seaman more than it does their father. "We're very happy," says Abduljubar Murad, with an expression of concern, "but we're also a little worried." He only had one question left about the destination of their flight. "Is Hanover near the sea?"

The Syrians who traveled to Germany on Wednesday had been chosen by UNHCR, the United Nations Refugee Agency. They include families with only one surviving parent or families with many children, as well as refugees with complicated injuries. "We chose by people, not religious confessions," says one UN worker, who doesn't want to be quoted by name.

This means that Sunni Muslims, a few Christians, supporters of both the opposition and of the regime have been brought together here. They are united by the fact that the only things left from their past lives now fit in their suitcases. "Here it doesn't really matter what someone is for or against," says one Assyrian Christian from Aleppo. "We were for the government, but it was their bombs from which I fled."

Before he boards the plane, he remembers to make one more request of the reporter. "Please don't write my name. I still have relatives in parts of Aleppo controlled by the army, please!" Fear, it seems, will also accompany these refugees as they travel into a new, uncertain future in Germany.