German Chancellor Angela Merkel probably had a relaxed holiday vacation. Her popularity ratings are high, and her conservative Christian Democratic Union (CDU) party hovering comfortably at around 40 percent in polls.

Meanwhile, her challenger in this year's upcoming federal election, Peer Steinbrück, is focusing on trying not to make yet another gaffe. It appears unlikely that the center-left Social Democrat has much of a chance at unseating the chancellor this autumn.

Merkel, who has made an art of risk avoidance, will probably attempt to continue governing inconspicuously until election day. But the question is whether the voters will let her off that easy.

As such, there are five things that Merkel ought to tackle in 2013 as the election approaches:

"Those who show courage, inspire courage," Merkel said in her annual New Year's address, quoting the words of beatified Catholic priest Adolph Kolping. She would do well to take those words to heart herself, instead of allowing debates to go on for months without taking a position. She has, for example, criticized the far-right National Democratic Party (NPD), but hasn't said whether she supports renewed efforts to have it banned. Poverty among the elderly must be addressed, she said, without offering any suggestions as to how that might be achieved. Gay and lesbian married couples don't necessarily need to be given the same tax privileges that heterosexual couples receive, she said, but that decision should be left up to the courts.

Merkel is the master of vagueness. She waits, and then changes course at the last moment in accordance with mainstream opinion -- if at all. This way she avoids causing anyone any pain and removes the risk of her own defeat. But a bit more clarity is to be expected from a chancellor, and in 2013, voters want to know what they can expect after the next election.

Merkel is not a gifted orator. Her speech often feels wooden, and sometimes sentences slip out that sound unintentionally funny, but aren't particularly rousing. The chancellor is an emotional person, though, and she should show it more often.

Certainly Merkel's measured demeanor has something to do with the fact that people trust her in times of crisis. Verbal sedatives and cultivated tedium don't inspire any enthusiasm for politics, though. A bit more passion in the Chancellery would do the country good.

Stabilizing Europe against the Crisis

Merkel stoked big expectations for the last euro crisis summit, saying she wanted to set the course for building an economic and currency union with her European colleagues. But by the time leaders of the 27 European Union member nations sat down together in Brussels in December, Merkel's zeal for reform had dwindled. A roadmap for the future had to suffice rather than any major goals.

There may be good reasons for that, such as sputtering French-German relations, or the fact that the prosperous North and ailing South have different ideas about what "more Europe" should mean. The upcoming election may also have something to do with it, as people tend to bristle when they hear that Brussels might gain more power.

Still, holding back now would be both reckless and sad. Just because the euro crisis has eased up doesn't mean it's over. The chancellor ought to use this time to create further economic and fiscal policy coordination, strengthen budgetary controls and implement a financial transaction tax. These tasks are immense -- and Merkel should tackle them.

While things may be going well for the chancellor, who wants to govern for another four years, it would still behoove her to plan for the long term, even if she is re-elected in the fall. At some point the question of her successor will be raised, but after leading the CDU for some 13 years, almost all of her influential competitors have disappeared. Those who remain are her deputy, Labor Minister Ursula von der Leyen, who was punished at their recent party convention with weak member approval, and Lower Saxony governor David McAllister, who could be unseated in the state election later this month.

Former CDU Chancellor Helmut Kohl was once so comfortable in his position that he forgot to pass the torch. Merkel would be better off grooming her own successor, before she ends up in the same position.

Some 42 percent of voters don't recognize the name of Merkel's Interior Minster Hans-Peter Friedrich, according to the latest SPIEGEL poll. Her Education Minister, Annette Schavan, only makes headlines because she's currently fighting allegations that she plagiarized parts of her doctoral thesis. And then there's Merkel's family minister, Kristina Schröder. Already unpopular for her policies on women in the workplace, she recently sparked another debate within her own party by suggesting that God could be gender neutral.

No, Angela Merkel's cabinet hasn't been blessed with shining lights. The closest it has to stars are Finance Minister Wolfgang Schäuble, an old hand, and Defense Minister Thomas de Maizière, a politician who is extremely down to earth by his very nature. It may be that having a government team that doesn't really stand out suits Merkel just fine. But in a cabinet where loyalty is deemed the most important trait, creativity and vision often fall to the wayside.

And although it's not cause to wish for the return of the dazzling former Defense Minister Karl-Theodor zu Guttenberg, who was forced to step down amid his own plagiarism scandal, Merkel would do well to consider bringing a few fresh faces into her cabinet in the event of her re-election. 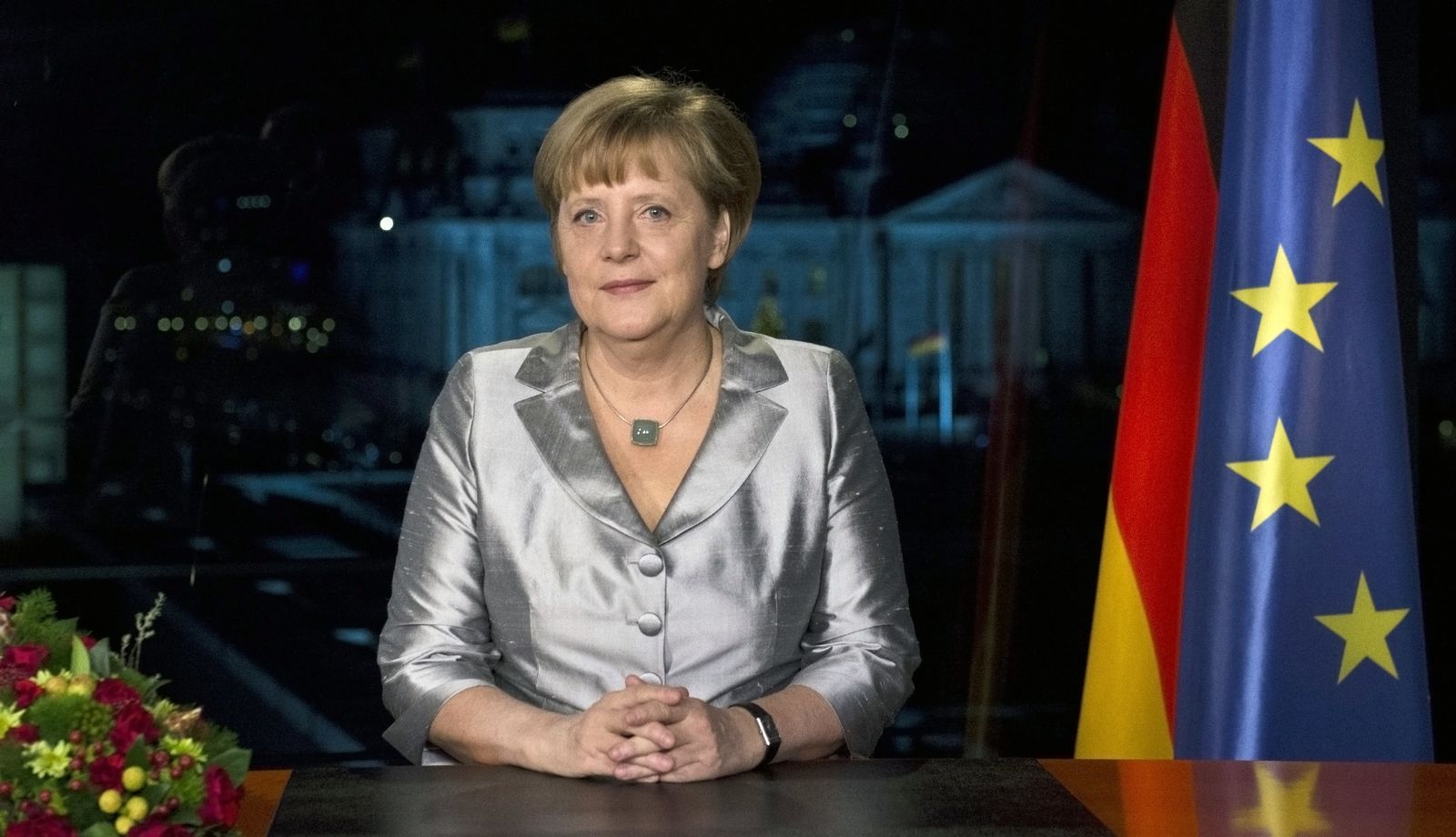 Merkel during her New Year's address. She rarely takes a firm position on big issues. 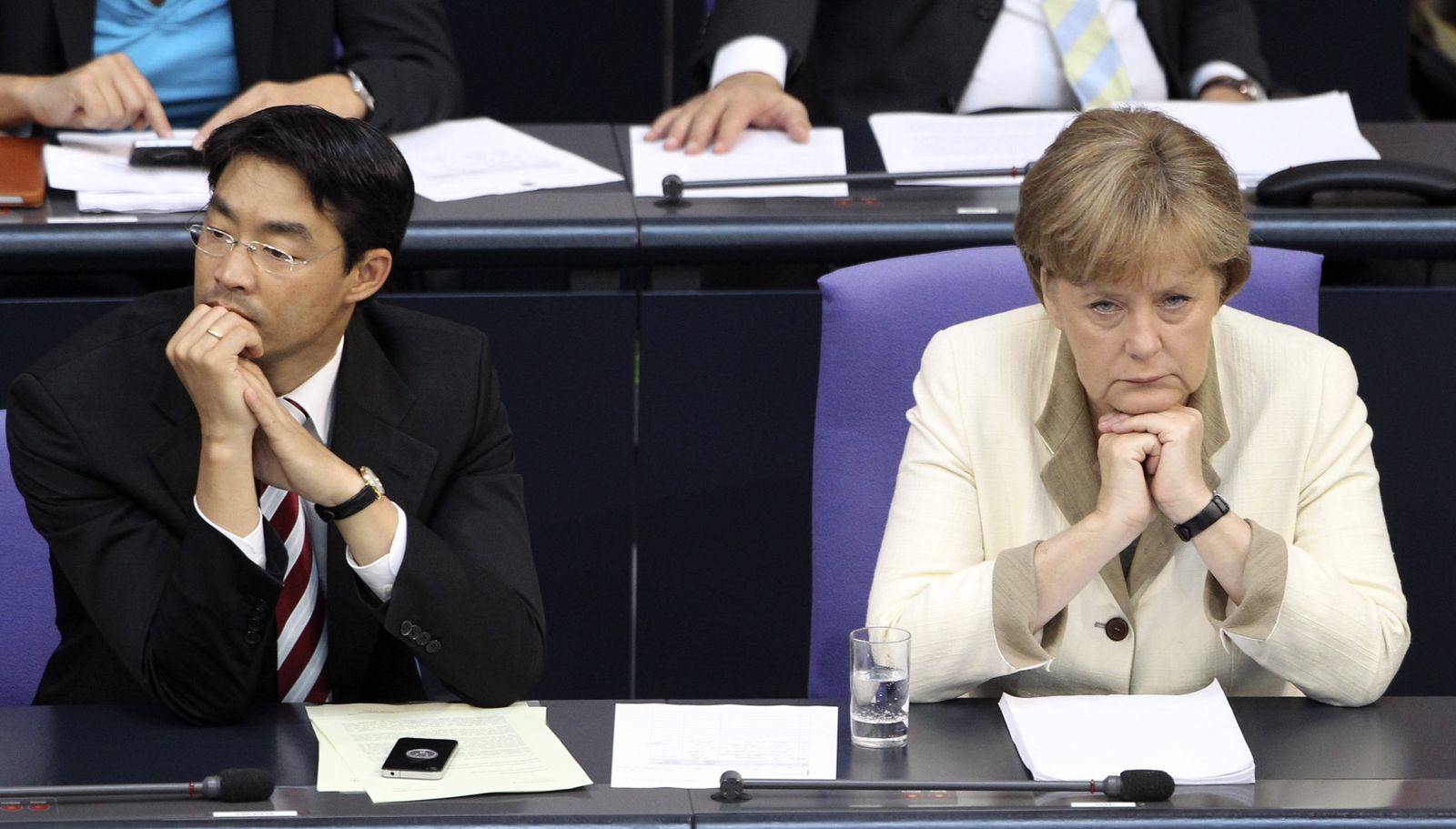 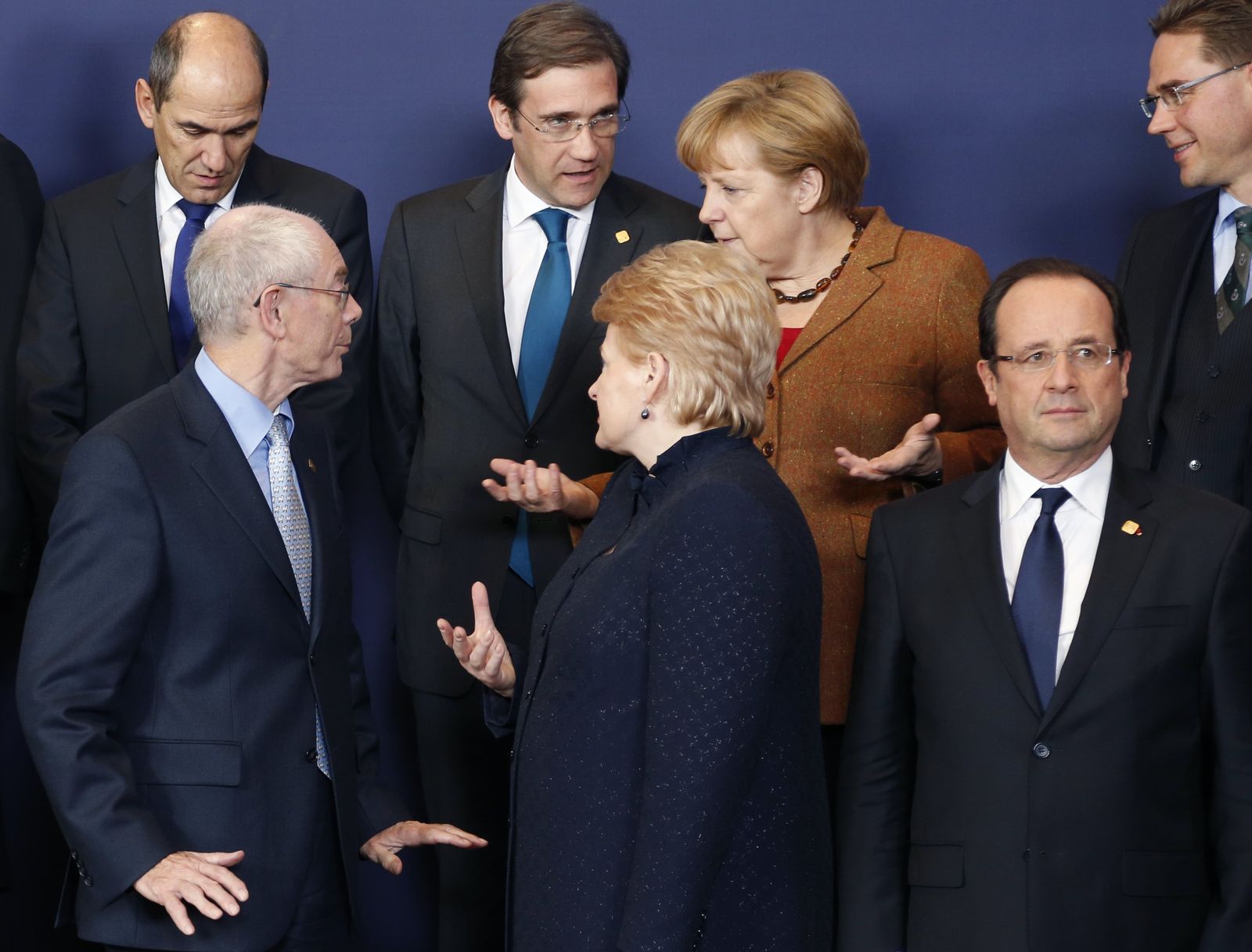 EU leaders in Brussels: Merkel has talked a lot about the euro crisis, but little has happened. 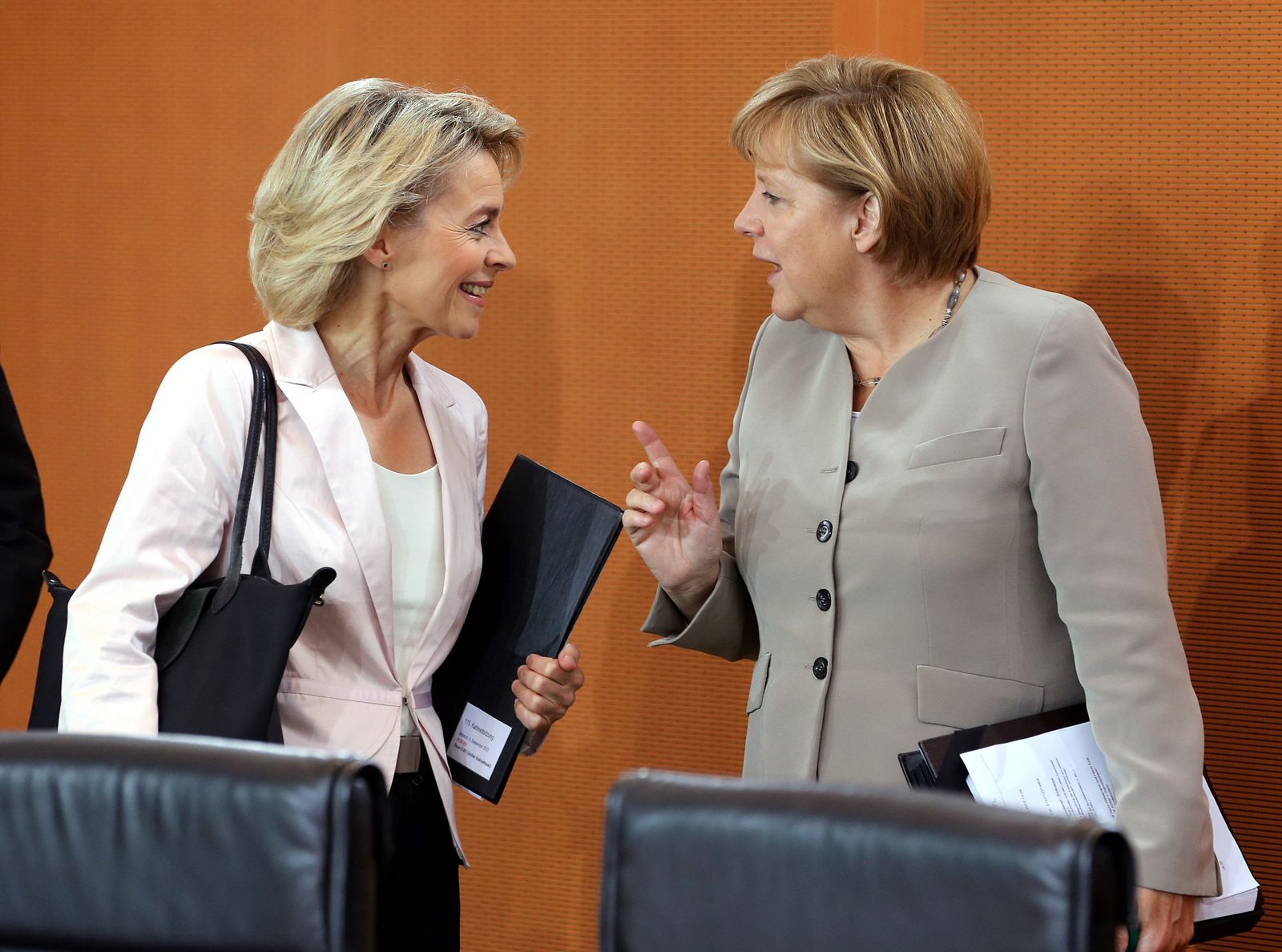 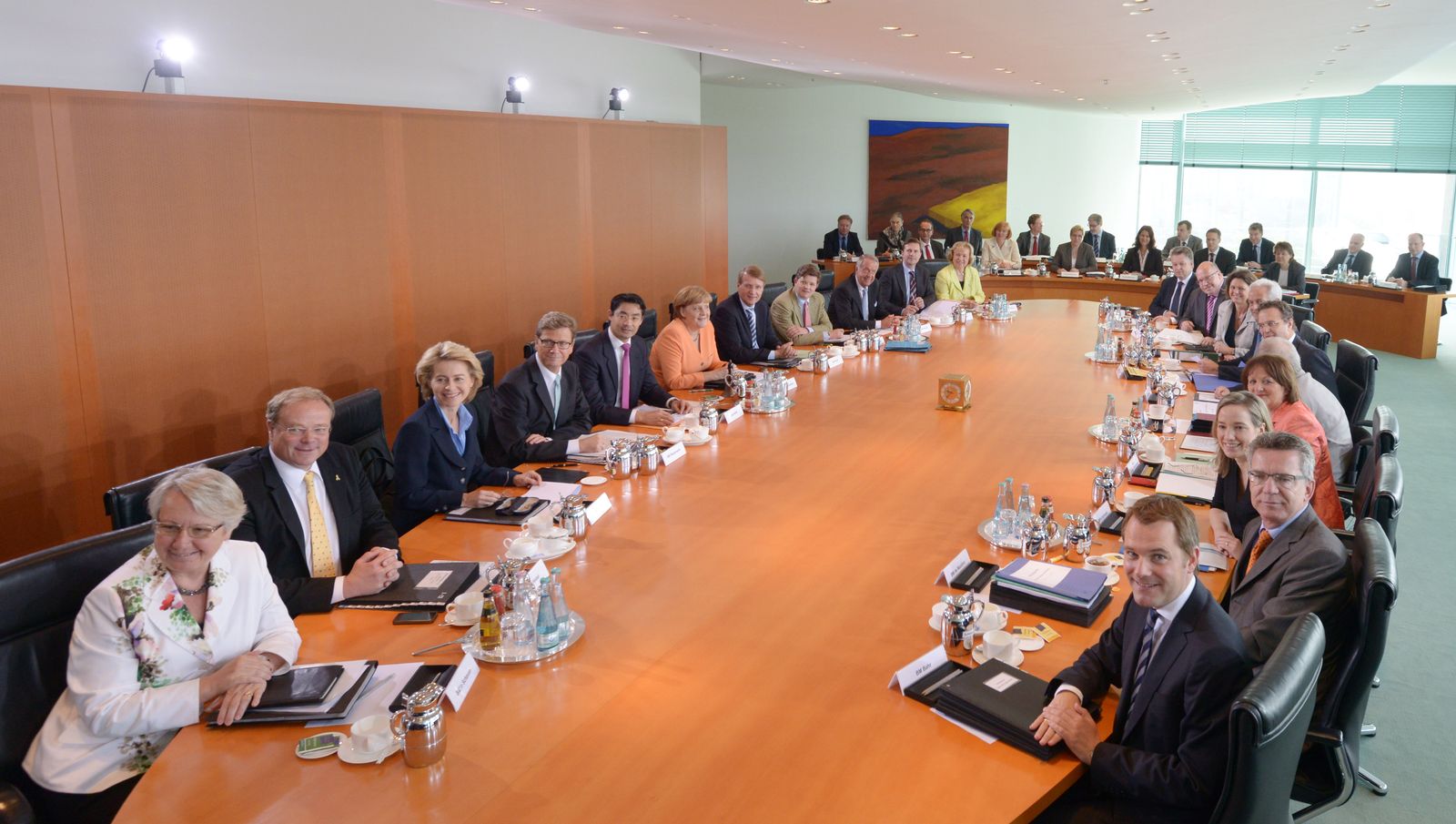