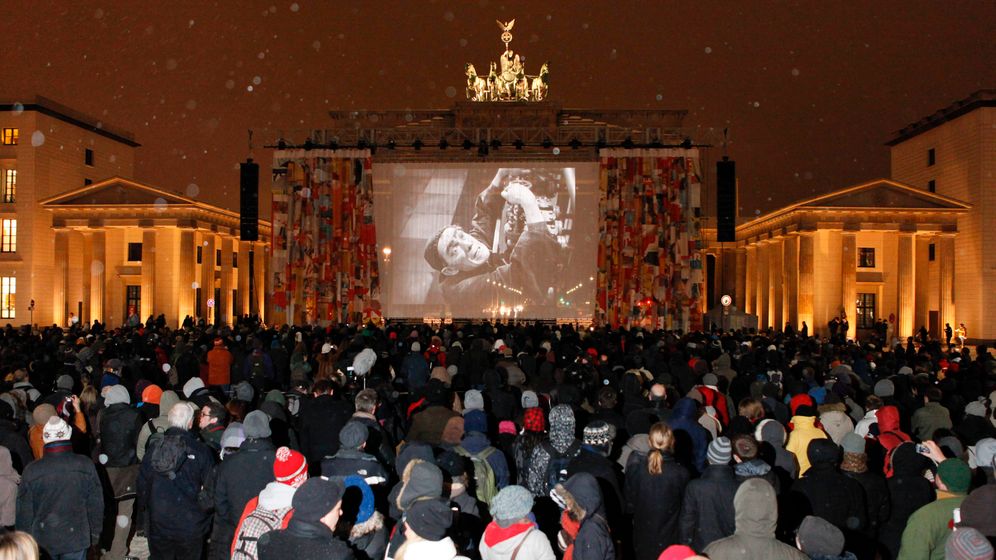 Photo Gallery: Fireworks in the Archive

German film history's most precious treasures are kept in a bunker outside Berlin. Thick concrete walls provide protection, but not from any bombs that might fall outside. The danger here lies within the film canisters themselves.

"Historical nitrate film is highly explosive," warns Egbert Koppe, a film restoration specialist at a branch of the Federal Archives in Hoppegarten, a town just east of the German capital's city limits. The Stasi, or East German secret police, once had their encryption headquarters just next door.

The archivist opens an old canister, showing a yellowed reel of film inside. Koppe's breath is visible in the air of the storage facility, which is kept cooled to 6 degrees Celsius (43 degrees Fahrenheit). The building contains a row of 40 small concrete rooms, separated from one another by steel doors in order to contain the damage in the event of a fire.

The problem: From 1890 into the 1950s, most movies were shot on nitrocellulose, a material that, like TNT, is based on nitrogen compounds. Its explosive force far exceeds that of gunpowder. Old film doesn't even need oxygen to burn -- it can ignite simply from impact or high temperatures.

"When film disintegrates, first it becomes sticky, then brittle, then disintegrates into dust," Koppe explains. Old, crumbling film can ignite spontaneously -- but it's hard to predict when that danger point will be reached. And one smoldering film reel could then set the ones next to it on fire, until an entire collection goes up in flames. In a serious fire, the storage facility's outer walls are built to collapse to relieve the pressure from within, so an earthen wall in front of the building adds extra protection.

Masterpieces such as the Skladanowsky brothers' first films (1895) or Fritz Lang's "Metropolis" (1927) are kept here, under conditions stipulated by the German Explosives Act.

At a time when moving pictures were first finding their feet, their audiences sometimes had to do the same. The first movie theater fire occurred at the Paris World's Fair in 1897, just a few years after the invention of the new medium, and 140 audience members died.

It wasn't until the 1930s that explosive nitrocellulose was gradually replaced with safety film made from acetate. Since the old nitrate films are also potential explosives, the archive feels obligated to copy them onto newer acetate film and then destroy many of the originals. In particular, bulk film material such as weekly newsreels from the 1930s and 40s is handed over for disposal by companies that also specialize in clearing land mines. Only the most valuable works are returned to the storage facility after a copy is made.

'Death of a Film'

Is it acceptable to destroy cultural objects as if they were land mines? Would it be better to preserve even the most banal film clips for all eternity? A bitter fight has broken out over just these questions.

Martin Koerber, a curator at the Deutsche Kinemathek, or German Film Archive, disagrees with the Federal Archives' destruction of these films. "We consider it wrong to destroy nitrate film without a pressing reason," he says. "In other countries, the preservation of nitrate film is a given, and the earliest extant version is considered the most precious copy of a film."

Although the Federal Archives employees work as carefully as possible, any copy will inevitably vary slightly from the original in coloring, exposure and range of contrast. The Federal Archives are "methodically and systematically destroying their nitrate inventory," three professors complained in a 2007 appeal. Irreplaceable nitrate films had already been destroyed, they added, including a 1911 film featuring Danish star Asta Nielsen.

"The death of a film has an almost philosophical dimension," says Berlin-based lawyer Winfried Bullinger. "Films are part of cultural memory; film emulsion is made up largely of animal protein, and thus must eventually die, just as we humans do."

Hopes for the Future

Backed by expert opinions in the field, Bullinger is fighting to free nitrate film from the Explosives Act and have it handled instead under historic preservation laws. "Perhaps in 30 years we'll have far better methods of creating digital copies," he suggests. "Then it would really be a pity if the originals had been destroyed."

The era of physical film is coming to an end, complete with the occasional round of fireworks to see it off. In Quentin Tarantino's satire "Inglourious Basterds," filmed three years ago at Studio Babelsberg outside Berlin, Adolf Hitler dies in a Paris movie theater, which partisans transform into a fiery hell with the help of nitrate film.

"We made the relevant film reels available for 'Inglourious Basterds,'" Egbert Koppe relates with a pleasant shudder, from one of the blue seats in the Film Archive's in-house theater. Fireproof glass separates the projection room here from the audience.

Renowned director Tarantino was hoping to use original nitrate film, such as old newsreels, for the movie theater fire scene. "But we couldn't take on that responsibility," Koppe says. "The combustion properties are unpredictable."