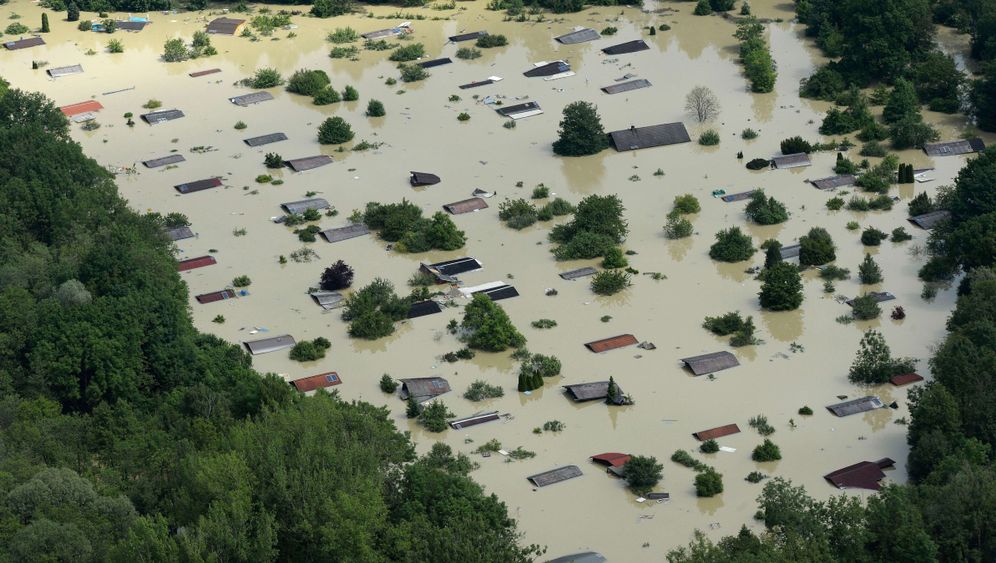 When the Bavarian city of Passau was overrun with floodwater last week, local students set up the Facebook page "Passau Räumt Auf" ("Passau Cleans Up") to help coordinate the clean-up. Lisa Wagner, a 21-year-old student of "Internet computing," spent up to 16 hours a day feeding the page with notices such as, "We urgently need headlamps and/or flashlights to clear out cellars without lights." Or: "Please don't overdo it, lotion yourself up (we have sunscreen at the university)."

By midday on Tuesday, the page had over 17,000 likes. Wagner was particularly pleased when she got a call from the city's emergency management office saying that together they had managed to get more done in one day than in two whole weeks during the last big flood in 2002.

It was a similar story elsewhere. Wherever rivers have flooded their banks over the last 10 days, people have been using modern forms of communication that weren't available to them in 2002. Using social networks like Facebook and Twitter, volunteers arranged to get together to fill up sandbags or clear out sodden buildings. Many used their smartphones to get up-to-the-minute information on what was going on. 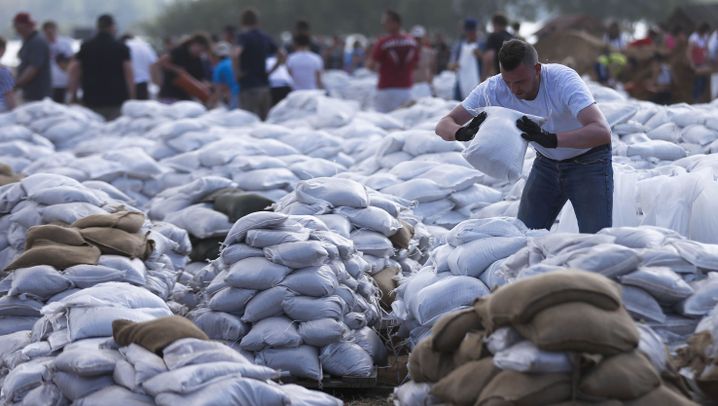 Photo Gallery: Germany's Flood Not Over Yet

On Twitter, the hashtag #Hochwasser (German for "flooding") was viral for days, and the Facebook page "Hochwasser Sachsen-Anhalt" amassed more than 90,000 likes. The movement was so successful that it even offset shortcomings in the official flood communiucation system. The flood caught many emergency services at a vulnerable time because they are in the process of upgrading their systems. "At the moment there is no nationwide warning system that can reliably reach the population in various emergency situations," said Martin Voss, head of disaster research at Berlin's Free University. He said that a number of new ideas and systems were being worked out, but that it was impossible to predict when they would be completed and made compatible with each other.

Until about 20 years ago, deafening sirens called people out onto the streets, usually for tests, in what were then West and East Germany. There were 100,000 of them during the Cold War. The sequence of tones showed what kind of danger was looming. A continuous wail for one minute signified a natural disaster or air raid. After the fall of the Berlin Wall, most of the sirens were taken out of service as cities sought to save money. They were replaced by vehicles equipped with loudspeakers or by radio alerts.

At present, hardly anyone knows how authorities are going to alert them and give instructions in a crisis. "It is a core task of civil protection and disaster response to warn the population of impending danger quickly and across large areas," Interior Minister Hans-Peter Friedrich said last week. It's a sentence better understood as a wish than a description of the present situation. 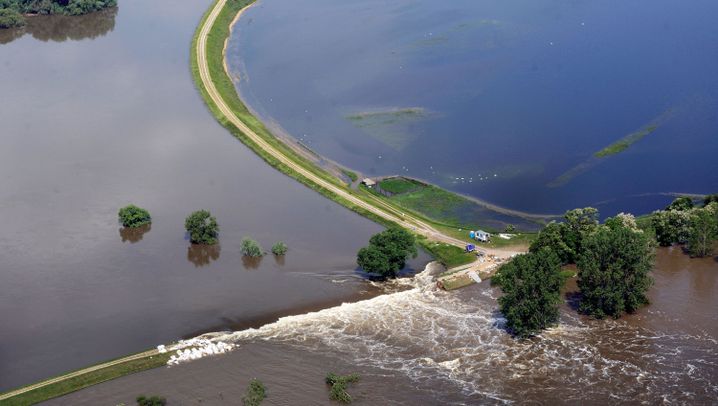 After the big flood in 2002, the national and regional governments set up a central disaster management headquarters at the Federal Office of Civil Protection and Disaster Assistance. In peacetime, disaster protection is the responsibility of the regional authorities -- only in times of war do federal authorities get involved.

The various emergency services, from voluntary fire departments to city disaster management authorities, have different types of equipment. Some of them use Facebook to inform the public. The ciy of Leipzig used it to request volunteer helpers, and in the town of Grimma the city council set up the website, "Fluthilfe Grimma 2013" ("Flood Relief Grimma 2013"). But usually the swarms of helpers organized themselves independently.

But that also meant that rumors and erroneous reports could spread like wildfire. The spokesman of the Dresden city authority said that in the past days, the chaos hasn't come "from residents or masses of water but from the nonsense being propagated" -- he was referring to the social networks. An official from the disaster management center in Dessau told one radio station: "On Facebook, especially on supposedly official pages, it appears to have become a trend to unsettle people by inventing things."

Patrick Hergert, who manages the Facebook pages Hochwasser Sachsen and Hochwasser Sachsen-Anhalt, confirmed that there had been individual instances of people posting wrong information. At 23, he's already something of a flood veteran. In 2002, his parents' home in Jessnitz was under two meters of water. He didn't want to go through that again.

Hergert runs an online marketing company and knows about social networks. "I thought I can help more like that than by hauling sandbags myself," he said. When someone needs help, Hergert passes on the message to the more than 100,000 supporters of the Facebook pages -- and often, helpers are dispatched within minutes.

But last week that system was also used to spread a report by a local TV broadcaster: apparently, the emergency services were abandoning a dike in the city of Halle at a key location in the fight against the flood. The report was wrong, and unsettled a lot of people. "Since then we look for a second source for every piece of information we send out," said Hergert. It is important to get confirmation from official sources or from serious media, he added.

Disaster researcher Voss hopes the latest flood will kickstart attempts to improve official crisis communications systems. "Maybe it takes a disaster like this one to get things moving forward," he said. In the United States, the Federal Emergency Management Agency, or FEMA, has far-reaching responsibilities. It can send tornado or flood warnings to personal cellphones without their owners having to subscribe to the service.

In Germany, authorities are developing a new "Modular Warning System" that is intended to be up and running by the end of 2013. The system allows authorities to dispatch messages through various channels, including cellphones.

The Federal Office of Civil Protection and Disaster Assistance is also looking at the possibility of sending alerts via radio alarm clocks and car horns. People wouldn't know what they're being warned about -- but they'd know something was going on. The devices would have to be fitted with a computer chip, however.

The Fraunhofer Institute for Open Communication Systems has already developed a cellphone alert system called "Katwarn." Users who subscribe to it are alerted by text message about large fires, unexploded wartime bomb discoveries or floods in their postcode areas. Katwarn has been available to all cities and rural districts in Germany since 2012, but only 14 postcode regions have so far signed up to it, among them Berlin and Hamburg. In the areas currently hit by flooding, only one district, Dahme Spreewald near Berlin, is hooked up to Katwarn. It appears that many local authorities are put off by the one-time €15,000 connection charge.

In Dresden, authorities prefer to rely on the tried and tested siren. Since the 2002 flood, the city has invested more than €2 million in installing almost 200 sirens. Unlike before, though, the systems don't just wail but can also talk. 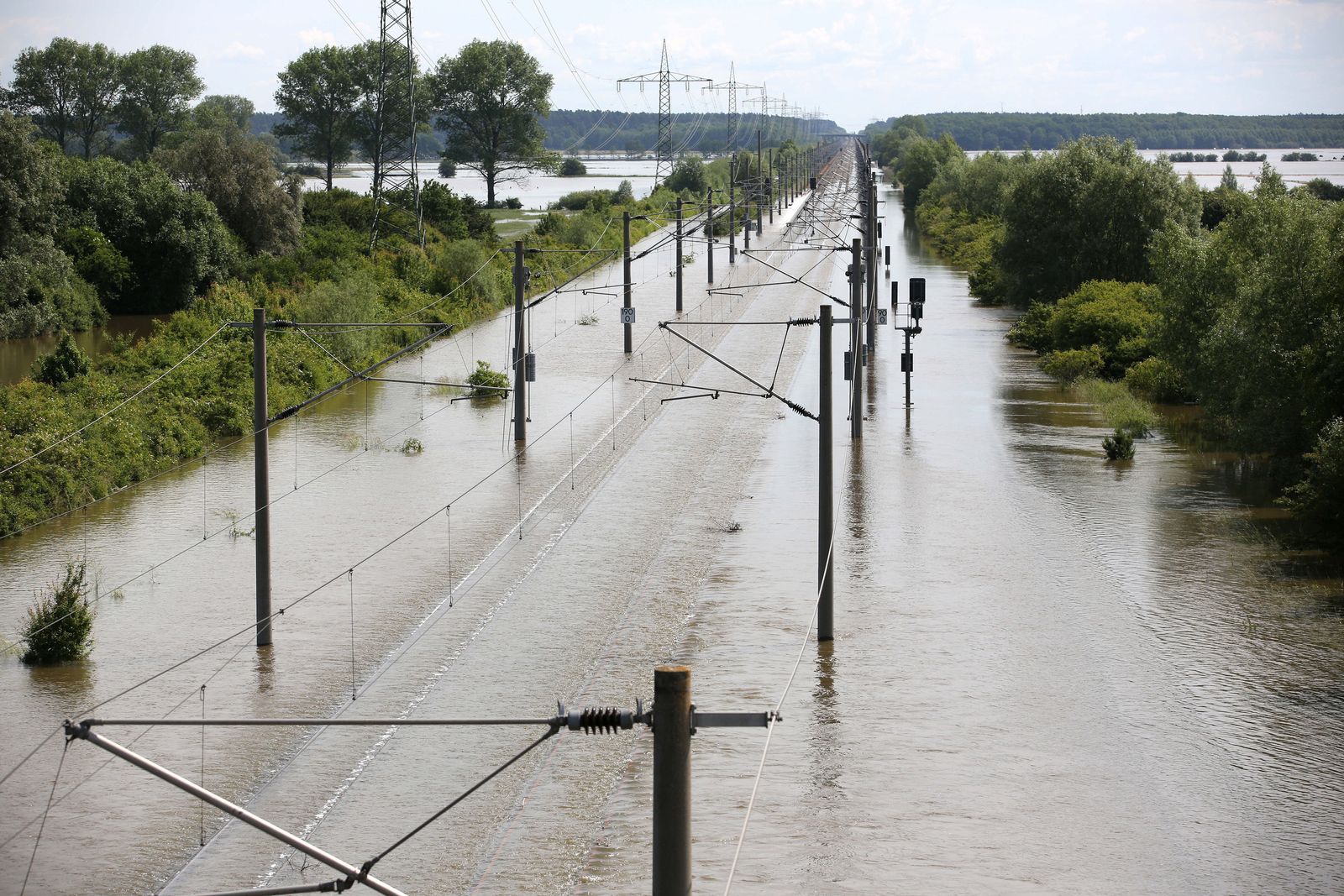 Flooded train tracks near Schönhausen: On Tuesday, high-speed rail services between Cologne, Frankfurt and Berlin remained disrupted because of the disaster. Delays sometimes lasting hours accompanied journeys along those routes. 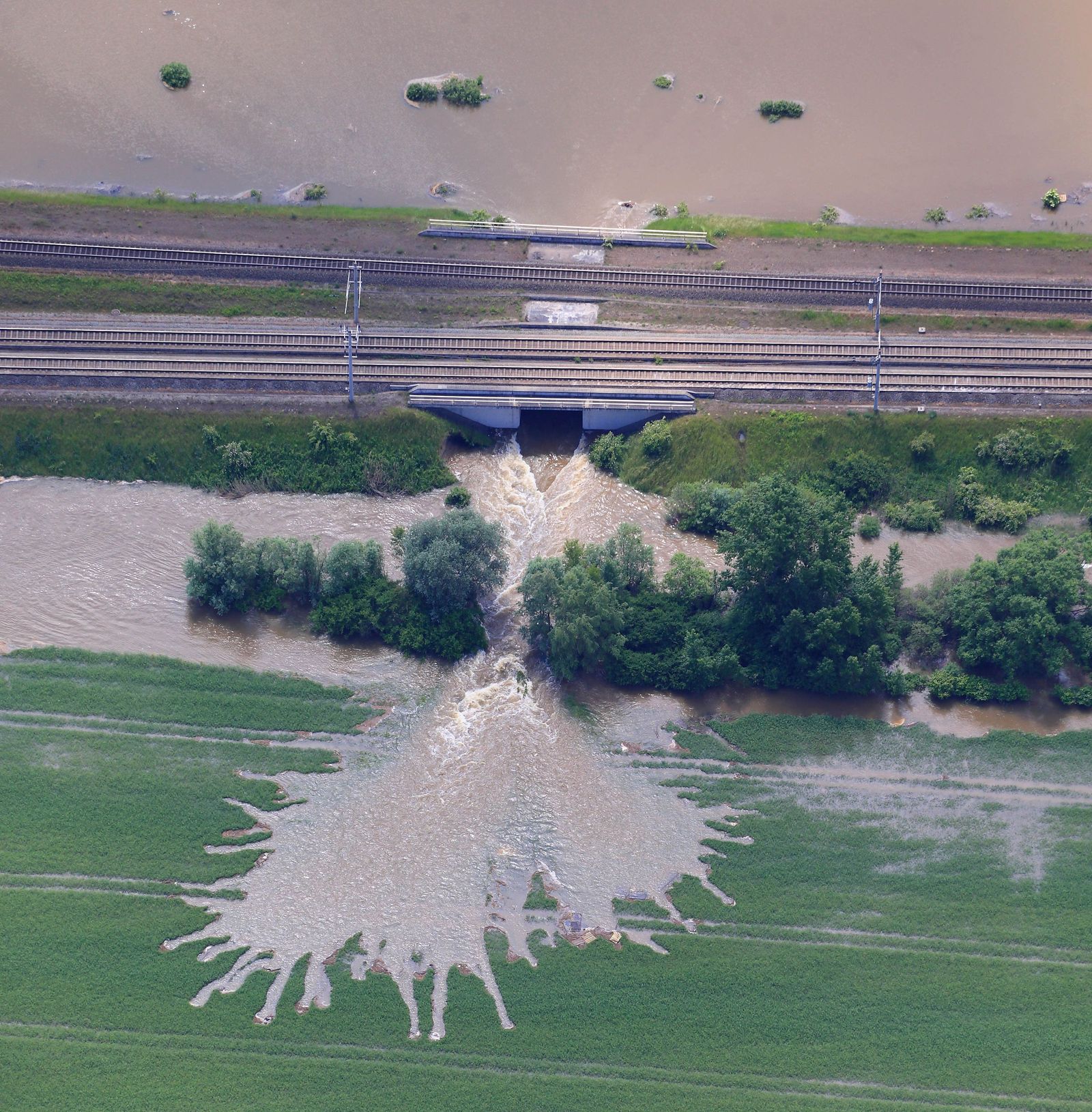