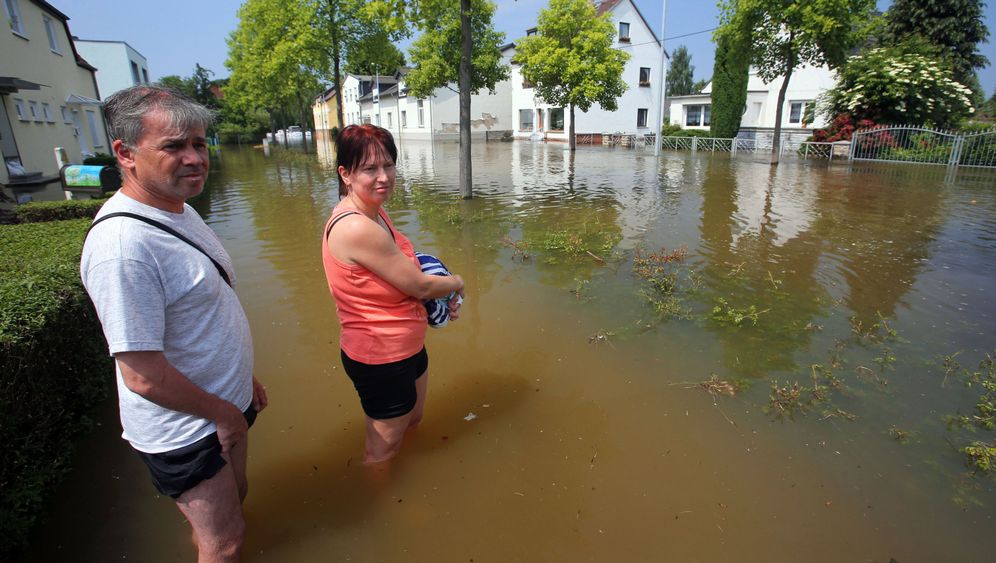 The worst flooding Germany has seen in a decade continues to roll northward through the country, while the sodden communities left in its wake have begun assessing overwhelming damages. In Magdeburg, a city with more than 230,000 residents in the eastern state of Saxony-Anhalt, some have expressed anger over the way the authorities have handled the disaster.

Overnight, a dike in the eastern state of Saxony-Anhalt broke, forcing the evacuation of more than 1,000 people in the county of Stendal, officials said on Monday. The force of the water from the Elbe River -- swollen due to heavy rain seen by Europe in recent weeks -- tore a 50-meter (164-foot) hole in the dike, completely flooding the nearby village of Fischbeck. As a result, a bridge over the Elbe had to be closed, and a number of major train routes that pass through the area were rerouted. The surge of water is also expected to cause problems on Monday downriver in the states of Lower Saxony and Brandenburg, which are bracing for the flooding.

Less than an hour south of Stendal county, floodwaters are reportedly beginning to recede in Magdeburg, parts of which were devastated by flooding over the weekend. "The situation is under control," said a spokeswoman with the local crisis committee. "But there is still no reason to exhale or give the all-clear."

Some 23,000 people had to be evacuated from their homes in recent days, and tensions are running high. While visiting the some 1,500 German soldiers deployed to the flooded city on Sunday, Defense Minister Thomas de Maizière became the target of residents' wrath.

"Piss off," residents in the hard-hit district of Rothensee shouted at the minister and Saxony-Anhalt's Governor Reiner Haseloff as they drove through hip-deep water in a military vehicle. "You're letting us drown here!"

Magdeburg residents are mainly frustrated with their mayor, Lutz Trümper, who wasn't with the defense minister during his visit. "All week they said nothing would happen to Rothensee," said resident Heike Pohle. But then, without forewarning, vehicles with loudspeakers were driving through the streets telling people to evacuate. There was no information from the mayor or the city government, she said. "No one will vote for him again."

There was more water than expected, said a spokeswoman at the mayor's office, who said residents' outrage was understandable. The problem originated with the state flood prevention authorities, who revised their predictions upward daily in the last week, she added.

According to state Governor Haseloff, Magdeburg has seen 25 percent more water than it did in the catastrophic flooding of 2002, which devastated large parts of Central Europe. And though the high water levels are expected to slowly recede in the coming days, they are still some 7 meters (23 feet) and likely to remain so for the next three days -- plenty of time to further weaken nearby dikes.

Meanwhile, the situation doesn't appear to be improving much in the city. Anxiety is high after an anonymous letter was sent to newspapers over the weekend threatening to attack already strained dikes. One of the targets was the Gross-Rosenburg dike, south of Magdeburg where the Saale and Elbe rivers meet, which broke on Sunday. It will be difficult to determine whether this was sabotage, given the fact that the dike was already in danger of bursting.

Magdeburg streets and schools remain closed, while more districts were evacuated on Sunday, though many residents refused to go. Some fear looting, while others are hoping that the flooding won't be that bad in the end.

Most people who were forced to flee their homes have managed to find places to stay, according to the Red Cross. But on Sunday night there were still some 20 people at one of three shelters set up to house Magdeburg residents. One of them was Evgeny Shlyapin, who found out at 2 p.m. that the district of Pechau was being cleared. For two hours he helped with flood prevention efforts there, then packed up some work clothes and his most important documents, putting his guinea pig Lili in a shoe box.

Laying on a cot in the high school gymnasium, the young man is among the mostly elderly people at the shelter. They seem grateful that they are safe and well cared for, but it's not a particularly comfortable setting. It's a bit lonely and frightening, Shlyapin says. Listening to an audio book with earphones, he pets Lili, pausing to listen to the news every half hour. He also regularly phones his wife and three children, who are staying with their grandparents.

Magdeburg residents shouldn't expect to return to their homes for about a week, Mayor Trümper has said. "I am moved by the hardship and distress in many, many households," Defense Minister de Maizière said on Sunday.

But a true assessment of what needs to be done won't come until the water has retreated again.