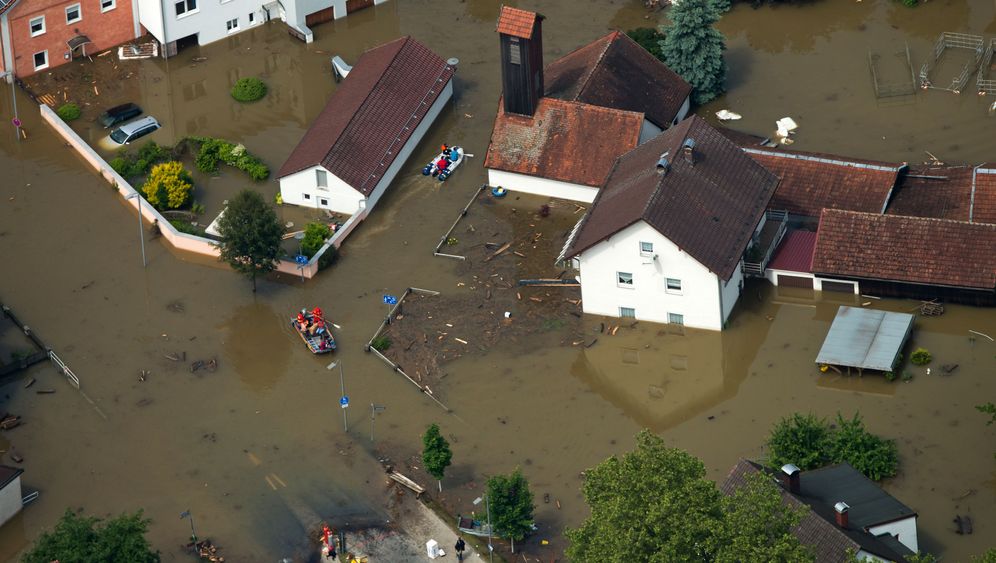 "It is indescribably bad," said Bavarian governor Horst Seehofer after surveying the flooding in Deggendorf by helicopter on Thursday. From the ground, things don't look any better, either.

The district of Fischerdorf is completely under water after nearby dikes broke in the flooding that devastated many river communities across Europe this week. An ochre muck has spread through the streets, swallowing up fences, car ports and traffic signs.

Buildings are submerged up to the second floor, but that hasn't stopped about 50 people from remaining in their homes. They didn't want to leave their houses and lives behind. Some fear potential looting. Thus, around 20 emergency workers are there around the clock to care for those who didn't evacuate and continue holding out in the upper floors of their homes. "We have to accept this," says operations manager Roland Vogt.

"I can understand it," says Florian Uhlmann, one of the boat drivers who move from house to house through the flooded streets at night. He is leaving for his sixth trip tonight, as his coworker lights the way with a flashlight.

Ahead of them, Fischerdorf is dark and quiet. Driftwood and debris float in the water, which smells like diesel fuel because of heating oil that has leaked from flooded homes. "Like a ghost town," Uhlmann says.

The boat passes sunken cars and flooded front yards. Water sloshes into a kitchen window, and a lonesome garden gnome bobs through an intersection.

The water is up to 2 meters (6.5 feet) deep. In some places, only the tops of traffic signs are still visible. The volunteer fire house is underwater, and a swamped car can be seen in front of an auto rental store.

The nighttime patrols can be dangerous. Not only have the boats become slippery due to the oily water, but driftwood can get caught in the motor. Despite the risks, people still need looking after, so emergency workers use traffic signs and fenceposts as their guides. "They're like flagpoles for us when it's dark," they say.

The building exteriors show that the water level has begun to recede, with a reduction of some 50 centimeters (20 inches) on Thursday. Gauges currently show levels of 7.78 meters -- above the 7.4 meters Deggendorf's protective walls were designed to hold off. The highest water level was 8.01 meters, which was a record for Deggendorf.

"This is a catastrophe for Lower Bavaria the likes of which we've never seen," says deputy district administrator Peter Erl. "Compared to this the flood of 1954 was peanuts." Though things are currently under control, "something could happen at any time," he adds, saying that all available emergency workers remain on alert. He's concentrating on dealing with the traffic problems caused by the flood.

Normally, it takes about an hour to get from the Bavarian capital of Munich to Deggendorf. But since the flooding has effectively encircled the town, it now takes three hours, which hasn't made things easy for emergency workers.

Some 120,000 people call the county of Deggendorf home, and are spread out across some 300 square kilometers (115 square miles). That's a big area to cover, though thankfully a major highway has been reopened nearby.

And what if it starts to rain again? That won't be a problem unless there's a heavy downpour, the official says. "The weather isn't really important anymore."