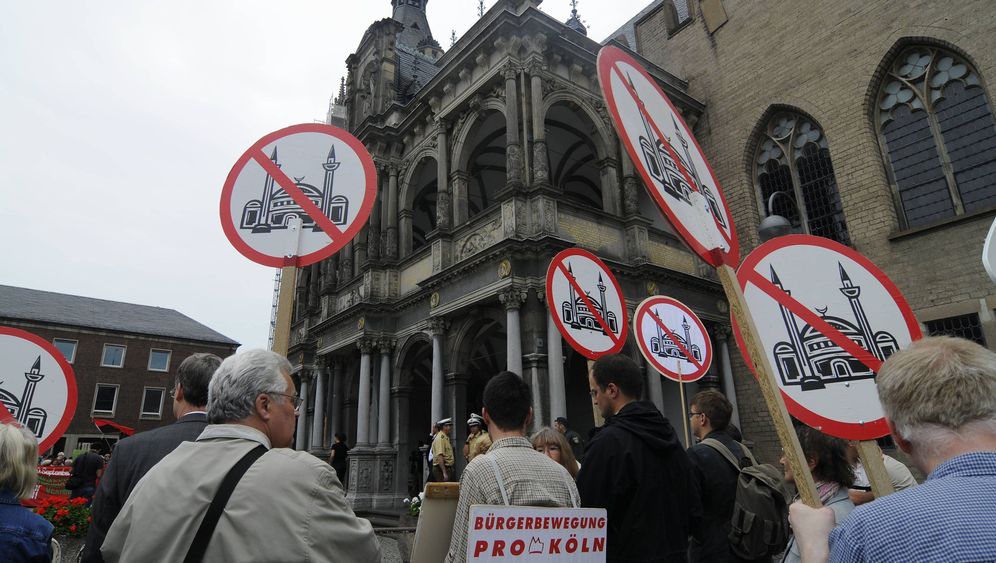 Photo Gallery: A Move to Ban Minarets in Europe

What could be more European than a castle? The Continent is dotted with them, often menacingly perched on forested hilltops overlooking rivers or ancient trading routes -- important bastions necessary for the defense of what developed into Europe's long and rich cultural tradition.

These days, of course, European castles tend to be little more than bucolic tourist attractions. But it is perhaps no accident that a small palace in western Germany's former industrial heart has been chosen to host a convention ostensibly aimed at defending European culture. The castle in question is the centuries-old Horst Palace, a Renaissance structure in the Ruhr Valley city of Gelsenkirchen. The gathering is called, pointedly, the Anti-Minaret Conference.

This Saturday, politicians representing right-wing conservative parties from across Europe will descend on the Horst Palace to discuss the dangers of Islam. Delegates from the Belgian nationalists Vlaams Belang will be there as will politicians from Geert Wilders's Dutch Party for Freedom and the Front National of Jean-Marie Le Pen. Others from Sweden, Austria and Eastern Europe are also on the invite list.

The hosts are a relatively new group of German right-wing conservatives called Pro-NRW (an abbreviation of the German state North Rhine-Westphalia) and the goal of the conference is clear: to follow in Switzerland's footsteps and ban minarets across Europe. And they want to use a provision of the European Union's new Lisbon Treaty to do it.

"I don't think that minarets are part of our heritage," conference attendee Filip Dewinter, floor leader for Vlaams Belang in the Flemish parliament, told SPIEGEL ONLINE. "They are symbols of radical Islam. The question is whether Islam is a religion like Protestantism and Catholicism and for me it is not. It is a political system, it is a way of life and it is one that is not compatible with ours."

Pro-NRW and the other right-wing parties were galvanized when Swiss voters last November passed a ban on the construction of new minarets in the country. Since then, the Swiss People's Party (SVP), which launched the referendum, have become the darlings of the European right. Indeed, the SVP has loaned their controversial campaign poster, which depicts missile-like minarets jutting out of a Swiss flag behind an ominous, niqab-wearing Muslim woman, to Pro-NRW for its campaign in Germany. And anti-minaret movements on the Swiss model have sprung up around Europe.

Dewinter has recently taken a closer look at whether a provision in the new Lisbon Treaty allowing for citizens' initiatives could be used to push through a Europe-wide ban on the construction of minarets. On Saturday, delegates at the Anti-Minaret Conference will discuss whether to begin collecting the 1 million signatures such a path would require.

The hurdles to such a strategy are high. Even if the Lisbon Treaty provides for citizens' initiatives, the legal mechanism governing such a procedure has yet to be decided on. Indeed, with the European Commission first set to send its proposal for citizens' initiatives to the European Parliament for consideration next week, a final legal framework may not be complete before the end of the year, an EU spokesman said.

Even then, such an initiative would only require the Commission to take a closer look at a given issue. Should the commissioners determine that an initiative falls under the jurisdiction of European nation-states or violates EU human rights guidelines, no further action would be taken.

Nevertheless, Dewinter seems invigorated by the possibility of putting a minaret ban on the European agenda. "Brussels is afraid of such a referendum and they know it would be a very powerful weapon in the hands of right-wing conservative parties," he says. "The collection of the signatures will be a political campaign in itself."

Still, the planners of this weekend's conference have greater ambitions than merely discussing the possibility of a European-wide minaret ban. Pro-NRW, an outgrowth of the anti-Muslim group Pro-Cologne, is seeking to establish a political foothold in Germany ahead of important state elections in North Rhine-Westphalia in May. The group is testing the waters to determine if the kind of populist, Islamophobia that groups in the Netherlands, Austria, Belgium and elsewhere have tapped into exists in Germany as well.

"The Islamization of our cities is continuing and there is broad fear among the populace," Pro-NRW head Markus Beisicht told SPIEGEL ONLINE. "If we do well in the elections, 2.5 percent of the vote or better, we will become a new brand name in Germany. There is a huge vacuum between the (far-right extremist) NPD and the (center-left) Christian Democrats and we want to fill it."

There is some evidence that he is right. A SPIEGEL survey last December found that, were a minaret referendum held in Germany, 44 percent would vote in favor of a ban while 45 percent would not. On the other hand, the majority of Germany's 4-million strong Muslim population has Turkish roots and has tended not to produce the kind of radicalism that has thrown a negative light on Islam elsewhere in Europe.

That, though, has not stopped Pro-NRW from depicting Muslims as being violence-prone and aggressive. In addition to Saturday's conference, the group is staging vigils in front of mosques throughout the region, beginning on Friday. A planned march is to end in front of the huge Merkez Mosque in Duisburg.

Police, though, are bracing for counter-demonstrations, with leftist groups having indicated ahead of the conference that they planned to disrupt it. Local politicians are likewise unimpressed. North Rhine-Westphalia's interior minister, Ingo Wolf of the Free Democratic Party, has described the "Pro NRW" gathering as "dangerous for our democracy." Cloaked as a legitimate movement, he said the right-wing group was fomenting fear of foreigners with its "anti-democratic and xenophobic ideology."

Sigmar Gabriel, the head of Germany's center-left Social Democrats, spent Friday touring mosques in the Ruhr region in order to counter the intolerant message sent by the anti-minaret meeting. "The truth is that anyone who wants to ban minarets and compares Islam with terrorism is motivated by xenophobia."

Beisicht is careful to insist that he and his allies have nothing in common with neo-Nazis, and he even tries to strike a moderate tone on occasion. "Religious freedom also applies to Muslims," he says, before insisting that minarets were a symbol of aggression.

Ahead of Saturday's conference, however, his European allies were not in such an accommodating mood. "Islam is a predator and it is attacking its weakest victim," Dewinter says. "Europe is that weakest victim. We have a problem with our demography; we have a problem with our identity; we are embracing multi-culturalism. We are very weak and Islam knows that -- and it is going on the attack."

Correction: An earlier version of this story indicated that a delegate from the Danish People's Party attended the meeting. While the party received an invitation, it did not send a delegate. We regret the error.

6 Bilder Photo Gallery: A Move to Ban Minarets in Europe 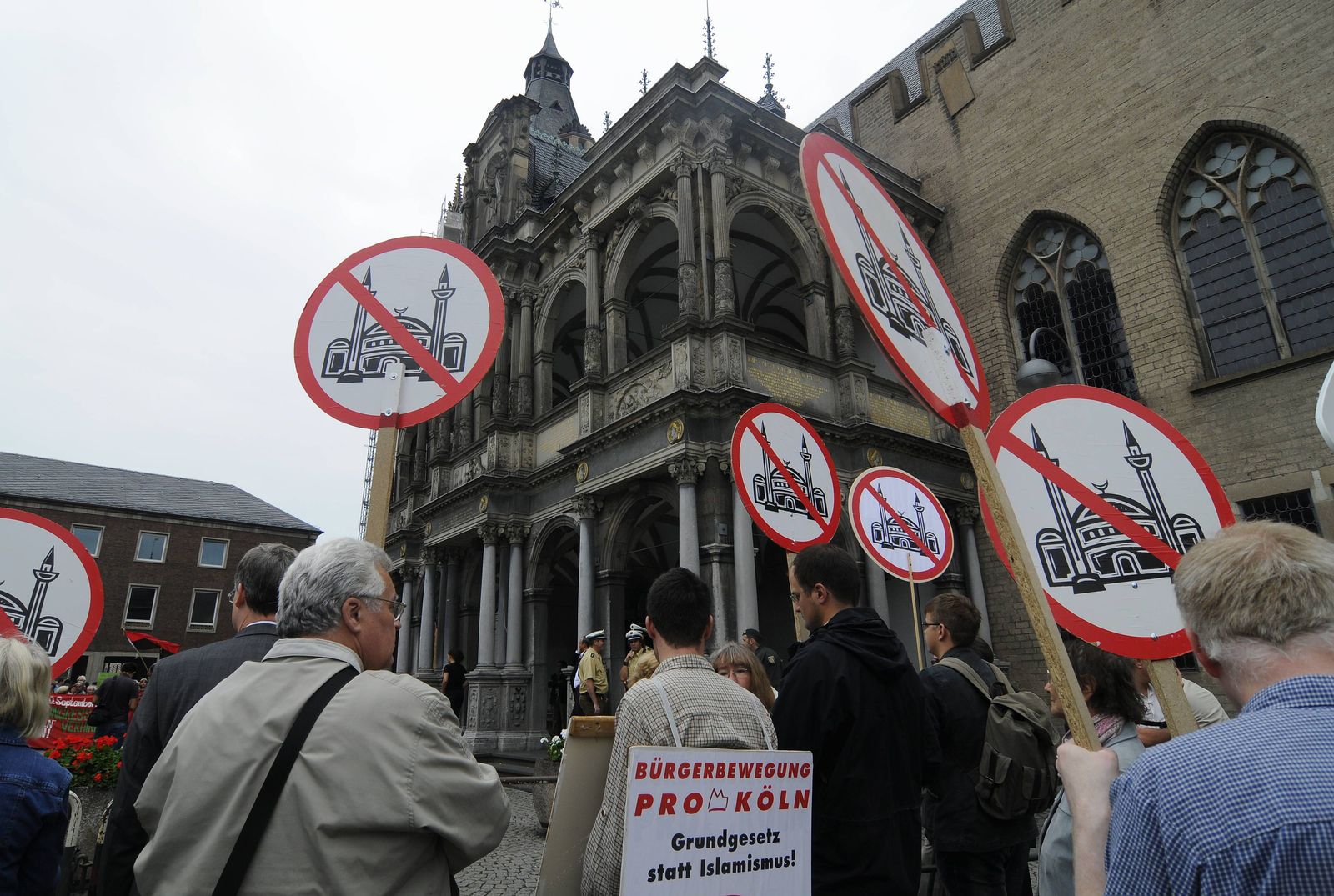 In recent years, right-wing populists have been mobilizing against Islam. In 2008, a group calling itself Pro-Cologne tried to block the construction of a new mosque in the western German city. The move failed, but the political group has grown and hopes for success in upcoming state elections in North Rhine-Westphalia.