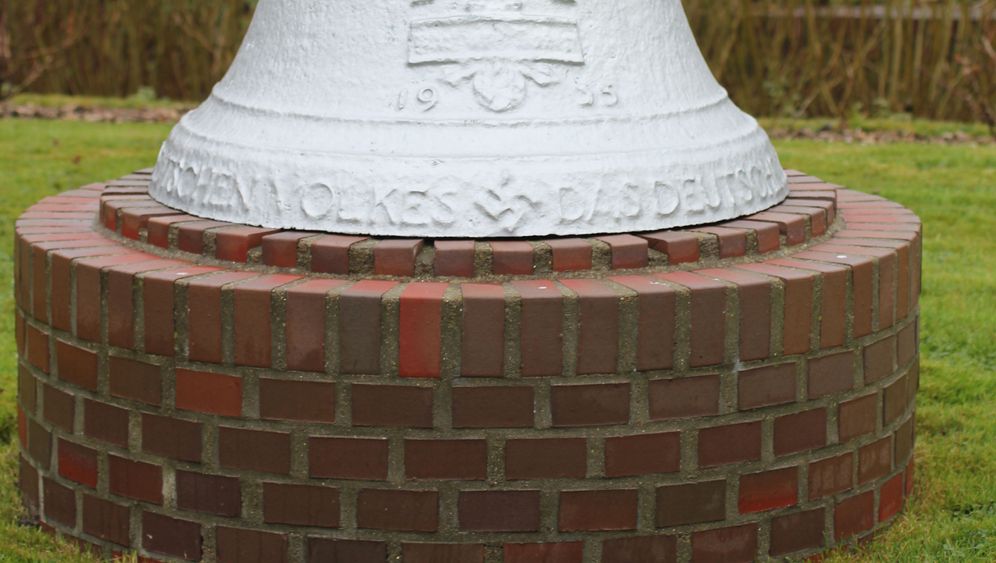 The wreath is still quite fresh. It was laid on the war memorial on Nov. 13, Germany's day of national mourning for the victims of war, to commemorate the fallen of World War II, whose names are engraved on stone slabs. According to the community's official history, the war took "a very high toll in blood" in the municipality.

But it is not the slabs with the names of the fallen soldiers that are attracting visitors' attention at this war memorial in Tümlauer-Koog, located on the Eiderstedt peninsula near the Danish border in the northern German state of Schleswig-Holstein. Instead, it is a massive bell that dominates the memorial -- and it is dedicated to Nazi leader Hermann Göring, Adolf Hitler's second-in-command.

The small settlement of Tümlauer-Koog is built on land reclaimed from the sea ("Koog" is a northern German word for polder) during the Nazi period, under the influence of Hitler's "blood and soil" ideology, which glorified rural living and promoted the idea of Lebensraum ("living space"). Up until 1945, the community was known as Hermann-Göring-Koog. Göring himself traveled to the newly reclaimed polder in 1935 to inaugurate it.

The Göring bell has been part of the war memorial since 2008, where it stands next to a misleading explanatory plaque. For three years, nobody took offense to the monument, probably because there are few visitors to the memorial and even fewer take the trouble to read the inscription on the plaque. That changed a few days ago, when a holidaymaker wrote to Peter Harry Carstensen, the governor of Schleswig-Holstein, to inform him about the bell. Carstensen responded by writing to the local mayor demanding that the bell be removed and the inscription changed.

'Göring Was Dressed All in White'

In Tümlauer-Koog, the bell, which was donated by the Nazi organization Reichsnährstand, which regulated food production, rests on a pedestal of red brick as if on a throne. "German farmers are the eternal blood source of the German people," reads the inscription on the silver-painted metal, an expression of the "blood and soil" ideology. The community of settlers, who had been strictly selected according to Nazi ideas of racial purity, clearly wanted Goring, at the time governor of Prussia, to feel honored when he visited the polder in 1935 to inaugurate it. His name is inscribed on the bell, next to swastikas, Nordic runes, and the Imperial Eagle symbol. Göring's visit clearly made quite an impression. "Göring was dressed all in white," wrote one girl in a letter at the time, as related in the community's official history.

Göring did not stay long on the polder, but the bell remained as a reminder of his visit. Housed in a wooden tower, it was originally supposed to warn the community against floods or fires, but in practice it was rung whenever a child was born on the polder. In recent years, however, it could no longer be used, due to cracks in the metal. In 2008, a new bell was installed in the wooden tower, and the Göring bell was transferred to its current location. At the time, the community leaders thought it was a good idea.

"The material is not high quality, it was probably patched together from old metal bathtubs," says Tümlauer-Koog Mayor Christian Marwig, who was deputy mayor at the time of the bell's relocation. The community's leaders agreed unanimously that the bell should be in a public place. "Why should it be auctioned, sold off or hidden away?" the mayor told SPIEGEL ONLINE. The bell is part of the history of Tümlauer-Koog, he explained, and should be seen as a kind of memorial.

The community also placed an explanatory plaque next to the bell. But the text was poorly chosen. The very first sentence is enough to raise eyebrows. "The NSDAP (Nazi party) has ruled since 1933," it reads -- as if the Nazis were still in power today.

It goes on to describe the Nazi ideology of "blood and soil" and how the newly reclaimed polder was supposed to represent a "new home by the water, gained through the strength of the honest farmers." After almost 80 years, the text reads, "we no longer follow this ideology, but we have to accept it as a part of our history." Reclaiming land for a polder is still a "great achievement" and creates land and food. The "ideological excesses," it concludes, "should be understood within the context of the adversity of a certain era."

There is no word about the Holocaust or the other crimes committed by the Nazis. The text also fails to mention Hermann Göring by name, let alone the fact that he was responsible for setting up the first concentration camp and gave the order to organize the so-called "final solution of the Jewish question."

Marwig himself thinks the first sentence on the plaque is "unfortunate." But he doesn't feel it would be necessary to more strongly distance itself from the National Socialist era or that more needs to be done to classify it historically. "Then we would have to put up a lot of signs here," he says.

At the same time, a little historical truth and reconciliation couldn't hurt in this part of northern Germany. The rural population here was very receptive to the Nazi's blood and soil ideology. In surrounding Northern Frisia, the National Socialist Party achieved above average election results. Hermann Göring-Koog and Adolf-Hitler-Koog (known today as Dieksander Koog and the District of Dithmarschen respectively) were showpiece projects for the national socialist leaders.

But Marwig argues that one can't just write that the Tümlauer-Koog is some kind of nest of people with Nazi sympathies. He says the community has fundamentally educated its residents about its problematic World War II history. Marwig says he has done more than most when it comes to educating himself about that history. No one, he says, votes for the far-right extremist National Democratic Party (NPD) in the area.

The issue was made public following a visit to the community by a resident of Norderstedt, a suburb of Hamburg. A few weeks back, the man had traveled to North Frisia on his vacation and shuddered when he saw the bell. He sent a letter to Governor Carstensen with photos of the bell and the memorial plaque. "I consider this memorial to be entirely inappropriate and request that you also share your opinion with me," wrote the man, who asked not to be identified.

Carstensen reacted quickly. He sent a reply to the vacationer and also wrote a letter to Marwig and conducted a very clear telephone call with the mayor. In its "current conception," he said, the memorial is unacceptable. The explanatory text is based on National Socialist ideologies without mentioning the "historical context of the NSDAP rule and its fatal consequences for Germany and Europe," a spokesperson for the governor's office said the letter stated. The letter added that the plaque was in part "historically inaccurate and misleading." Carstensen called for the bell to be removed.

Marwig said he didn't understand the fuss, adding that nobody should have a guilty conscience about the bell. Still, he said he also didn't want people coming to the community to photograph the bells.

Nevertheless, he said he would obey the governor's wishes. "We will respond to it," he said. On Friday, Marwig said the bell had been removed from the site and placed in storage.