On May 19, 2011, Holger G.'s past caught up with him. Three old acquaintances stood in front of his home, a clinker-brick and gable-roofed house in the small town of Lauenau in Lower Saxony. They were Uwe Böhnhardt, Uwe Mundlos and Beate Zschäpe, a trio of neo-Nazis now known as the Zwickau cell, who are believed to have murdered at least 10 people between 2000 and 2007. They had simply turned up out of the blue, and needed G.'s help once again.

This time, as the 37-year-old forklift driver would later tell investigators, they wanted him to get Böhnhardt a new passport. Böhnhardt knew Holger G. from the neo-Nazi scene in the eastern German city of Jena, and had been using his identity for years. Because the two men looked alike, G. had furnished his friend with a whole host of official documents from 2001 onward, including identity cards, health insurance cards, a driver's license and an automobile association membership card. Even so, when they turned up last May, Holger G. was reluctant to help. But the trio said there was no going back, pointing out that, since he'd been helping for 10 years, it was too late for second thoughts. So Holger G. let them talk him into helping again.

Böhnhardt cropped G.'s hair short, gave him his black-framed glasses with the oval lenses, and the four of them drove to a photo studio in Rodenberg, 6 kilometers (4 miles) away. There Böhnhardt and Mundlos waited outside while G. -- made to look like Böhnhardt and wearing a check shirt -- had his picture taken in front of a light-blue background. The eight biometric passport photos cost €12 ($15). Beate Zschäpe paid. "They were just regular customers," the owner of the photo studio recalls. "There was nothing strange about them, nothing at all."

Things continued to go smoothly when they reached the passport office on that Thursday in May. Accompanied by Beate Zschäpe, Holger G. applied for and was issued with passport number C25JCHFH29, valid through May 2021. According to the document, the holder is 1.89 meters (6 feet 2 inches) tall with blue-gray eyes.

Drawing a Line under His Past

Half a year later, Böhnhardt and Mundlos lay dead in a motor home in Eisenach; Mundlos had apparently shot Böhnhardt and himself following a botched bank robbery. Beate Zschäpe blew up the apartment in Zwickau where the trio had been hiding, and then fled, but turned herself in a few days later. She steadfastly refuses to talk.

Not so Holger G., who has been in pretrial detention since November. He has been avidly cooperating with investigators in hopes of drawing a line under his past. As a result, he is one of the federal prosecutors' most important witnesses because he is also supplying information on a key period in the case that they still know very little about, namely the time after the cell allegedly committed their first murder in the year 2000.

G.'s statements have given the authorities the most detailed insight yet into the clandestine activities of the Zwickau trio. It's also now clear how professionally and blatantly the cell emulated tricks used by leftwing terrorists in the 1970s and 1980s. For instance when procuring papers to be able to rent apartments or cars, buy mobile phones or visit the doctor, they used a ploy reminiscent of the "look-alike" tactic employed with great success by the infamous Baader-Meinhof Group, also known as the Red Army Faction: acquiring genuine ID papers from real people who looked like them.

However G.'s information mainly points the finger of blame at a man who apparently knew far more about the cell's activities than his former political party would like. That man is Ralf Wohlleben, a long-time official in the far-right National Democratic Party (NPD), and one of four suspected supporters of the group who are currently behind bars. For a time Wohlleben allegedly played a key role in the support network of the National Socialist Underground (NSU), as the Zwickau neo-Nazis dubbed themselves.

According to Holger G., Wohlleben asked him for money for Böhnhardt, Zschäpe and Mundlos shortly after the fugitives had gone into hiding. Wohlleben allegedly said it was a matter of national honor. After all, the five had been close friends in the 1990s, when they had clubbed together as the Kameradschaft Jena ("Jena Comradeship"), a committed group of neo-Nazis in the city of Jena.

G. says he gave what he could: 3,000 deutsche marks (€1,533). But Wohlleben apparently wasn't satisfied. A short while later, in 2000 or 2001, Wohlleben returned with a much bigger demand: Would G. apply for a passport that he could give to Böhnhardt because they looked so similar? When G. agreed, Wohlleben allegedly gave him a secret telephone number with which he could contact the trio.

G. recalls the trio asked him to grow a mustache and wear glasses for the first passport photo. The document was handed over at a clandestine rendezvous at Zwickau train station in accordance with a carefully hatched plan. G. says he was told not to spend more than an hour at the station in case he had difficulty providing an alibi if the authorities questioned him about that day. After he supplied the passport, the trio gave him the feeling that he'd committed some sort of heroic deed.

The files also show G. was initially in contact with the fugitives' parents. He once told Uwe Böhnhardt's family that the three would "rather shoot themselves than give themselves up." The parents had apparently been appalled by this, and the contact ceased.

Pistol in a Bag

The passport wasn't the only favor G. did for the cell. G. claims he undertook one more job for them. At this point in the interrogation, G. falters as he tells his story. It is only with hesitation and interruptions that he continues telling his questioners what happened next. He relates how Wohlleben had asked him to transport a carryall to Zwickau in 2001 or 2002. Inside this was a cloth bag Wohlleben had given him. It felt like it contained a pistol. According to G.'s account, the NPD man didn't want to say where he had got the gun from. He said it was better if G. didn't know what the three planned to do with it.

G. says Beate Zschäpe met him at the station in Zwickau and accompanied him on foot to a street with tram tracks in the road. There, in a ground-floor apartment of a multifamily house, Böhnhardt and Mundlos were waiting for him. One of them unpacked the gun and loaded it, which G. told them made him feel uneasy. He claims he said he wanted nothing to do with guns, and that it was crazy to think five people could save the world. He therefore refused to be their courier anymore -- at least, that is how he describes it today.

G. told interrogators the trio had also argued with Wohlleben about the gun, and that the incident had ended their friendship. In one of the last conversations he and Wohlleben had had about the fugitives, the NPD man apparently said in so many words that he had had enough of them. G. believes Wohlleben was keen to distance himself from the cell because he apparently knew more about them, and didn't want to jeopardize his future within the NPD. When contacted by SPIEGEL, Wohlleben's lawyer, Nicole Schneiders, declined to comment on the allegations.

Apart from a few interludes, G. remained in contact with the fugitives. He says they spoke once or twice a year using the secret cell phone number until the day in 2005 when the three turned up unannounced in front of G.'s apartment in Hanover. G. says he was thrilled to see them -- even though he claims he had already left the neo-Nazi scene by that time. He says he even told Böhnhardt, Mundlos and Zschäpe about this, and that they hadn't minded, allegedly saying he needn't feel he had betrayed them.

Later that year they apparently asked him for another favor. This time, G. says, they wanted him to get them a driver's license in case they were stopped at a police checkpoint. G. says they had given him the application fee, just as they had reimbursed him for the other papers.

Böhnhardt apparently used this driver's license in April 2007 to rent a recreational vehicle that he subsequently used as a getaway car after the murder of 22-year-old police officer Michèle Kiesewetter in Heilbronn. The police obtained the vehicle's license plate number as part of their subsequent dragnet search, but it was another four years before they were able to establish the true identity of the person who had rented it. The RV in which the two neo-Nazis were found dead in Eisenach in November 2011 was also rented using G.'s identity.

G. was arrested at a concert in 2008 for possessing the drug ecstasy. He now hopes his statements will document his departure from the far-right scene. He claims he had already distanced himself mentally from the scene many years earlier. His lawyer, Stefan Hachmeister, says, "He didn't support the trio because he was a supporter of their group, but out of misplaced loyalty and friendship."

Until his arrest, G. lived unobtrusively in Lauenau with his girlfriend and two children. Although the authorities found €27,250 in a safety deposit box, there is currently no evidence to suggest the neo-Nazis paid G. for his services. G. says most of the money belongs to his girlfriend.

He himself had been working as a forklift operator since April 2011, doing night shifts loading and unloading trucks at a removal company warehouse. Some 500 investigators are currently looking into the neo-Nazis' criminal activities. Nevertheless, staff at the warehouse are surprised the Federal Criminal Police Office appears not be to be interested in G.'s place of work. Until last Friday, officers hadn't even searched the place for evidence, as is usual in such cases. G. still has a locker containing his personal effects in the recreation room.

"The door is locked," one of his colleagues says. "We haven't opened it because we don't have a key." 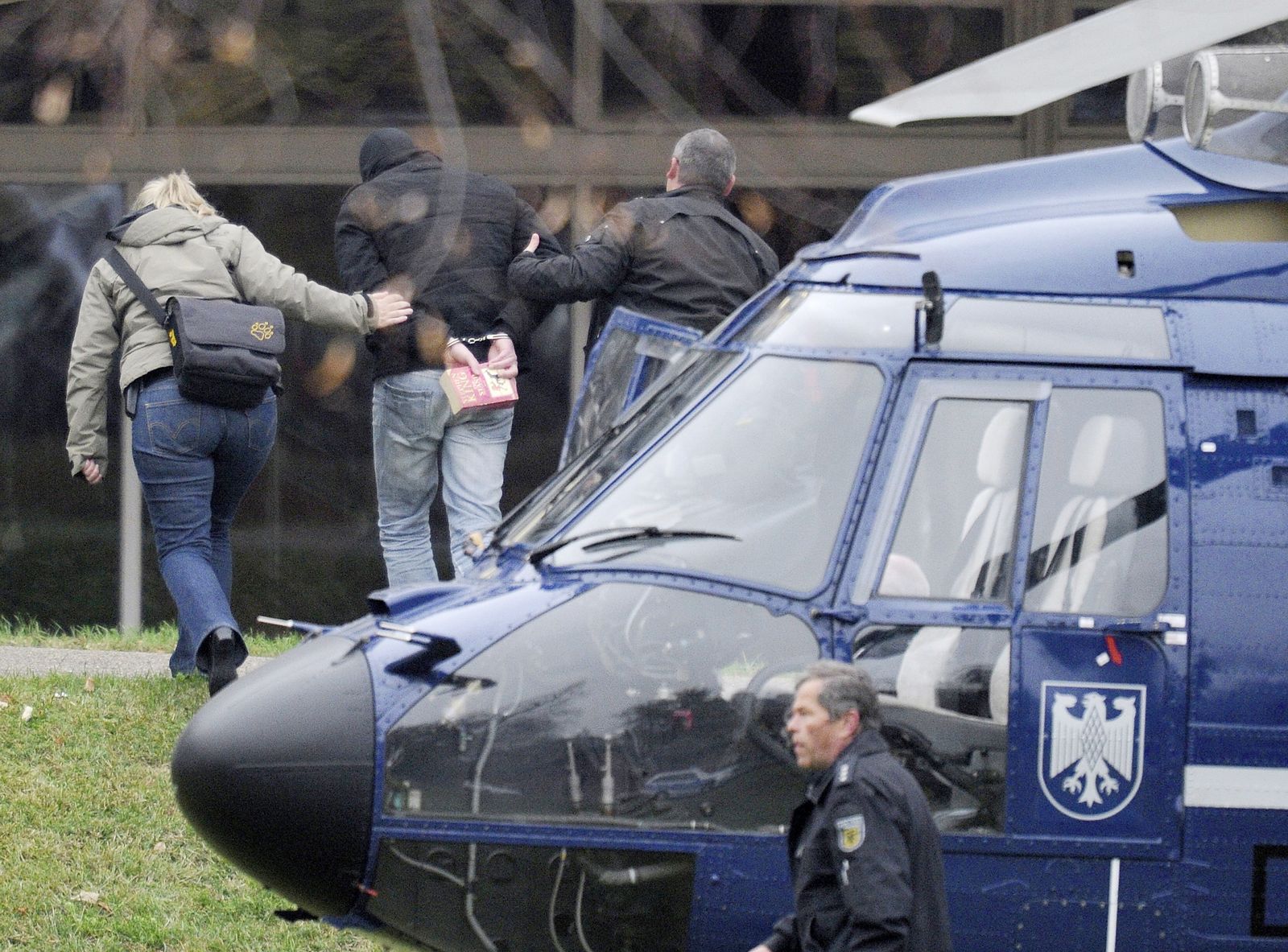 Holger G. is seen on Nov. 14 as he is taken to the Federal Court of Justice in Karlsruhe.