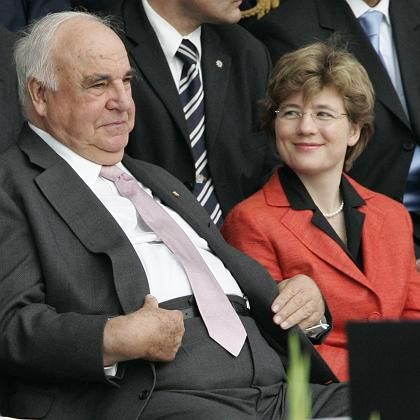 Helmut Kohl at a ceremony in July 2007 with his partner Maike Richter, whom he plans to marry.

Germany's conservative Christian Democrats are worried about the health of former Chancellor Helmut Kohl, who sustained a bad head injury in a fall two months ago in his home in Ludwigshafen, southwestern Germany. While recovering in hospital the 78-year-old then suffered severe circulation problems and had to be transferred to intensive care.

Chancellor Angela Merkel's office was alerted by enquiries from journalists who had heard rumors that the former German leader may be close to dying. Merkel is now receiving regular updates on Kohl's health. People close to the former chancellor say he continues to keep track of German politics and closely followed the state election in Hesse in January, for example.

But they say he can't make phone calls because he cannot speak clearly enough to be understood. In addition, being confined to bed for so long has affected his circulation.

It had already taken Kohl several weeks to get back on his feet after a knee operation at the end of last year. At the moment he is only allowing close friends to visit him.

Kohl's office last week confirmed a report in mass circulation Bild newspaper that he plans to marry his 43-year-old partner Maike Richter, an economist who works in the Economy Ministry, as soon as possible.

Kohl's first wife Hannelore committed suicide in 2001. She had suffered from a rare illness that made her allergic to light.

Kohl was post-war Germany's longest-serving chancellor. He was a driving force behind European integration and was among the strongest advocates of Europe's single currency.