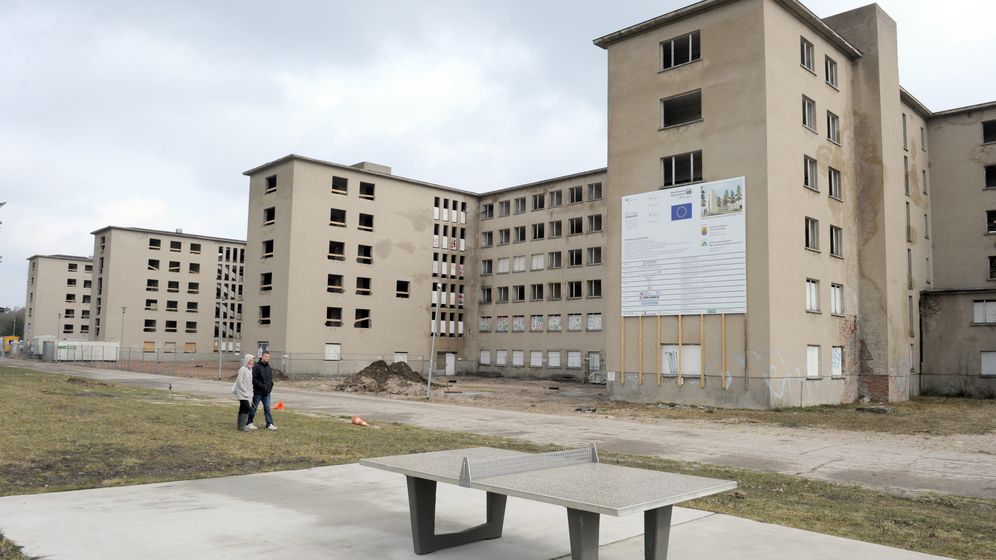 Axel Bering is the kind of person who seeks out challenges that would cause others to give up hope. For years, the former banker has been running a small history museum in Berlin that is far from being in the black. Furthermore, after the business-friendly Free Democratic Party (FDP) lost its seats in Berlin's city-state parliament, Bering became the party's deputy state chairman. And then, to top it all off, he bought a monumental structure on the Baltic Sea, which not even Nazi Germany had managed to complete.

Bering, a lanky 51-year-old, takes two steps at a time, scrambling over construction debris. He taps on exposed steel beams and walks the seemingly endless hallways, past broken windowpanes and openings covered with plastic sheeting.

"We're tearing out many of the walls, and we're installing floor heating and parquet flooring," he says. "The windows are being enlarged. It will be simply magnificent." Then Bering pauses for a moment, as his slick salesman's demeanor gives way to a cautious smile. "You certainly do need a lot of imagination to envision what it will look like," he says.

That, certainly, is a difficult statement to contradict. To build his "Meersinfonie" (Sea Symphony), a development of vacation apartments, he and his business partner Michael Jacobi want to renovate parts of Prora on the island of Rügen. Prora is a 4.5 kilometer-long (2.8-mile-long) steel-and-concrete monstrosity, which sits behind the dunes on a stretch of the island between the towns of Binz and Sassnitz.

The Nazis built Prora, a massive tourist destination, under the auspices of their Kraft durch Freude ("Strength through Joy") leisure organization. The East German National People's Army used the complex as barracks. But after the fall of the Berlin Wall, the buildings at Prora fell into disrepair. Today, the Nazi relic serves primarily as a bizarre and spooky tourist attraction for vacationers staying in Binz, an upscale beach resort.

So why would people voluntarily spend their vacation in Prora, or perhaps even buy an apartment there for €200,000 ($257,000)? Bering raves about the fine white sand at the beach, which reminds him of the Danish island of Bornholm, where his family vacationed when he was a child. Such "1a beaches" have become a rare commodity in Germany, he says. "I fell in love with Prora when I first visited it in 2006," he says. Last year, he and Jacobi bought two sections of Building 2, which they plan to turn into about 60 apartments.

The Berlin native was one of the first to buy an apartment in his own development. Bering reserved a two-story unit with a terrace for himself in the building, where construction began in early April.

The duo began marketing the complex last year. They are advertising the project with the help of a glossy brochure filled with all kinds of computer-simulated images, as if the depressing Nazi backdrop had already been erased. The caption under one virtual snapshot, which depicts vacationers relaxing in a seaside townhouse, reads: "Awakened with a kiss and beautifully renovated."

"We're having trouble keeping up with the inquiries," claims Bering's partner Jacobi. They are coming from cities like Dresden and Berlin, he says, and even former East German soldiers once stationed in Prora are among the potential buyers. "The only people we don't want are Nazis who might want to raise the imperial war flag," says Jacobi. But he hasn't had any inquiries from them yet, he adds.

The two men claim that 11 apartments had already been sold by early May. Jacobi, who, like Bering, worked for Berlin's GrundkreditBank before becoming a real estate developer, hopes that the initial sales will bring in other buyers. "The business will really get going once the first apartments are finished," he says. According to Jacobi, the plans call for a shuttle bus to Binz and a parking garage, and the bumpy access road, constructed with concrete slabs when the East German army occupied the complex, will be repaved.

Karsten Schneider, who has been mayor of nearby Binz since 2011, wishes the Prora visionaries nothing but the best. He does not object to the gloomy colossus down the road from his beach resort being turned into an investment with a bright future. But Schneider lacks faith in the project.

Before being elected mayor, Schneider was a high-school business and computer science teacher -- in other words, someone who knows how to calculate risks and opportunities. "I'm a little skeptical," says Schneider. He has seen too many flashy plans, and he has already watched other investors' proposals for the Nazi relic come to nothing. The former Berlin bankers, Bering and Jacobi, are not the first to try their luck with Prora.

After German reunification, the complex went to the federal government and was placed under landmark preservation. A sale of the entire property, long favored by the Federal Property Administration, was not an option. The federal government then decided to auction off Prora, one block at a time, but the effort was initially a failure.

Finally, in 2004, what was left of Building 6, which had been blown up after the war, was sold for €625,000 to an anonymous buyer based in Liechtenstein. Nothing has happened on the property since then, with the exception of a tall fence the new owner had built.

Building 3 went under the auctioneer's hammer that same year. It was sold to the highest bidder, Inselbogen, a real estate development company from the German city of Wuppertal. The building, which is 500 meters long (1,640 feet), has housed a documentation center on the history of Prora since the 1990s.

Inselbogen, apparently deterred by red tape and renovation costs, abandoned its original plans to turn the building into a hotel. As a result, there are no hotel guests to be disturbed by the pounding music emanating from the disco "Miami" on Friday and Saturday nights.

Aside from the documentation center, the disco, which includes a restaurant, is the only major tenant in the unrenovated complex. Inselbogen apparently has no plans to rent out other parts of the building at the moment. The company's office in Prora is usually empty, and a note on the door lists a mobile phone number at which the company can be reached.

The federal government sold off another kilometer of Prora in October 2006. A company owned by Ulrich Busch, the son of former singer and actor Ernst Busch, bought Buildings 1 and 2 for about €500,000.

Busch borrowed some of the money from an Austrian real estate broker, who then took over Building 1 and sold it for a profit last year to a company in Berlin, which plans to open a model apartment soon.

While the plans of Prora's private investors exist only on paper at the moment, the Rügen district government has already done something more concrete. In Building 5, it hasinstalled a 400-bed youth hostel, which attracts young people from all over the world. The hostel has barbecue areas and sports fields, as well as a café, making it the only renovated part of Prora on display at the moment.

It wasn't an entirely inexpensive venture. The section of the building used for the youth hostel cost €16.5 million to renovate, with most of the funds coming from federal subsidies, the European Union and the German state of Mecklenburg-Western Pomerania.

The youth hostel, with its fresh coat of white paint, is certainly attractive, but it's still a far cry from the developers' visions of luxury apartments with parquet floors, floor heating and kitchenettes. "A renovation on that scale can easily run into the hundreds of millions," says Binz Mayor Schneider.

But investor Bering remains undeterred. He is banking on a selling point that has always been successful in Germany: The purchase of a unit in Prora can be used as a tax deduction. The price per square meter in Bering's pilot project ranges from €2,200 on the land side to €3,300 for units with a view of the sea. Buyers can deduct up to two-thirds of the purchase price from their taxes, regardless of whether they intend to occupy the units or treat them as investments.

Germany offers tax benefits for the purchase of historic real estate, including units in the former Nazi colossus on the island of Rügen. But to qualify for tax breaks, the buildings, post-renovation, will have to retain the look created by Hitler's architects. Nevertheless, Bering has been permitted to include one modification: the addition of balconies facing the sea.