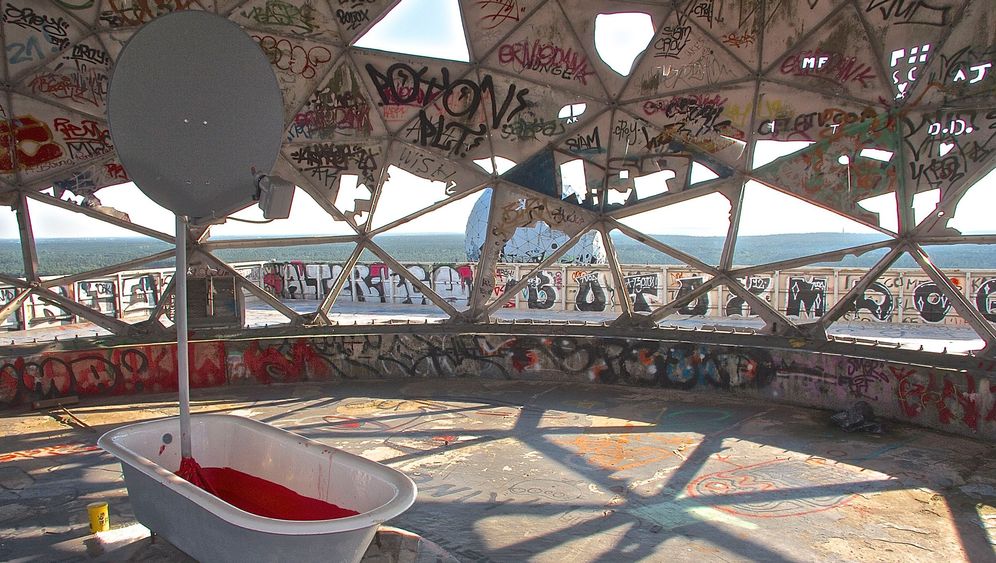 Berlin's most famous spy station, a National Security Agency complex built on the rubble from World War II, is being filled with art for a weekend show that starts on Friday. The former NSA listening station, abandoned for years, has been transformed from a moldering junkyard to giant art show, and just in time to contribute to the debate on recent revelations about the US agency's widespread spying around the world.

A day ahead of the opening, artist Dirk Krechting was sweating as he pulled a bucket full of water up four floors on a rope. He was putting the finishing touches on what he calls a simple and cliché statement about spying and warfare. The piece, a bathtub filled with bright red water and a small satellite dish perched above, literally looks like a bloodbath. It's located directly in the middle of a gigantic radar ball that used to be part of the listening station.

Spying and the NSA scandal have become a major political issue during a German election year, and the art show addresses the revelations directly. With more than 70 artists involved, works include everything from video installations to robot-like sculptures made from material found at the derelict NSA site.

"I wanted the artists to enjoy the space and play with the history here," said Jill Ariela, a freelance curator working with a group of the artists on the WestTurm Pavilion exhibition. "It can feel heavy in many ways because of the history but it's really beautiful too. I want it to be a really light experience."

The art show is part of a broader national heritage day on Sept. 8 with a theme "Beyond Good and Beautiful: Inconvenient Monuments." In Berlin alone, more than 300 historic sites are open to the public for the event. But the NSA station at Teufelsberg, which translates to "Devil's Mountain," may be one of the most inconvenient monuments in the city.

Set on Berlin's highest point, the "mountain" is a 115-meter (377-foot) mound of rubble collected from what remained of Berlin following World War II. At the very top is a collection of industrial-style buildings topped with five white radar balls that formed part of the NSA's "Echelon" global espionage network, which was used to spy behind the iron curtain during the Cold War. It was in use from 1957 to 1991 and then abandoned.

For many years, it was a surreal landscape of broken glass, tangled wiring and smashed electronics -- one of many abandoned spaces throughout the German capital. Just three or four years ago, it was still loosely guarded, with easy access through a gap in the fence. But more recently, two West German architects who own Teufelsberg with a firm called IGTB have been working with two tour operators to make it safer and more orderly, cutting down calls to police.

One of the tour operators, Niklas Mascher, said he hopes the art show this weekend will help showcase the site and highlight Teufelsberg's broader importance. Specifically, he would like to see the site designated as a monument, especially considering the recent revelations on spying and the "soft totalitarianism" of the NSA.

"This year the topic is uncomfortable monuments," said Mascher, "and ours is a perfect example."

Teufelsberg will be open to the public all weekend, though guests must still be accompanied by a guide and sign a liability waiver. Sign-ups are accepted at the site from 10 a.m. through 10 p.m. The opening night performances for the WestTurm Pavilion show are on Friday at 7 p.m.