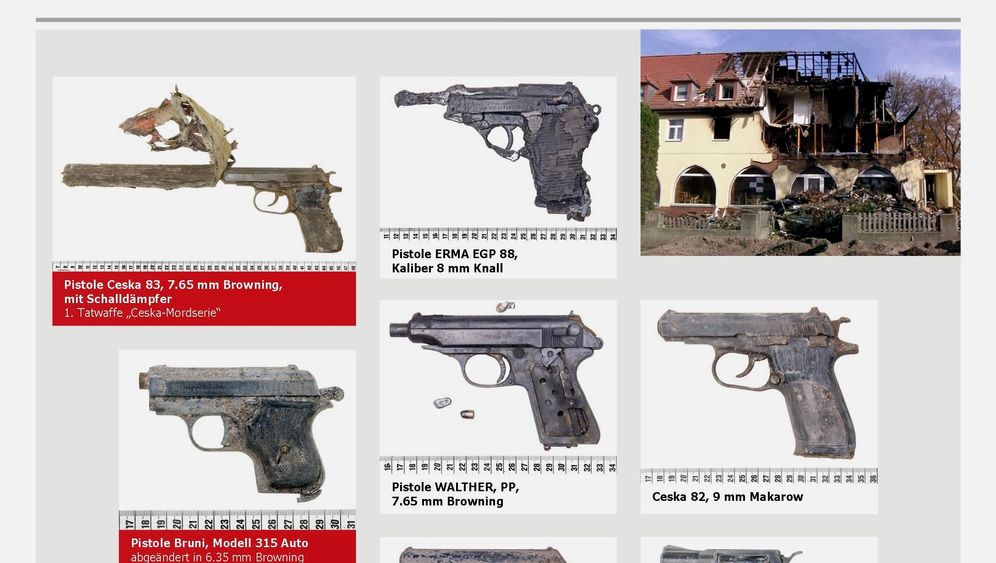 When Beate Zschäpe set fire to her apartment in Zwickau on November 4, she made a big mistake: She forgot to open the windows. The gases given off by the fire accelerant she had used caused an explosion that blew out the walls and extinguished most of the fire.

It was a stroke of luck for police because it enabled them to retrieve thousands of valuable clues from the headquarters of the neo-Nazi cell, including sketches of the site of one of the murders they committed in Nuremberg and of further potential targets, city maps with locations marked on them and detailed reports they had made while reconnoitering buildings.

Hundreds of police officers across Germany are combing through the pile of evidence to piece together the crimes the Zwickau cell committed over the last 14 years. They are gaining a clearer picture each day of both the terrorists and their own failings in over a decade of fruitless investigation.

The former lawyer of Uwe Böhnhardt, one of the two members of the terrorist trio who committed suicide last month after a botched bank robbery, recalls a "man in a trench coat" who appeared in his office in the eastern city of Gera shortly after Böhnhardt went underground in 1998.

The man said he worked for the domestic intelligence agency of the state of Thuringia and asked the laywer to tell Böhnhardt that he could expect lenient treatment if he turned himself in to the police. The lawyer went to see Böhnhardt's mother in Jena, but she told him she had not been in touch with her son. Böhnhardt remained out of sight.

But there is much to suggest that agents from the domestic intelligence agency, the Federal Office for the Protection of the Constitution, had dozens of clues indicating that the trio may be hiding in the eastern city of Chemnitz, where they allegedly robbed several banks in 1999.

There were, officials say off the record, more than 20 sightings around this time -- by agents from regional and national intelligence agencies, and by police detectives.

From May 6 to May 8, 2000, agents were watching a person believed to have contact with the trio. Photos were taken duing the surveillance, including one in the car park of a supermarket in Chemnitz. It appears to show Uwe Böhnhardt loading something into the trunk of a car. The well-focused photo was sent to the regional and national criminal police forces. But by the time they received it, Böhnhardt was long gone.

An attempt several months later to arrest him on his 23rd birthday in Chemnitz also failed. Böhnhardt appeared one day earlier than expected -- again, agents only got a photo of him, taken by an automatic camera.

Then, in March 2002, the domestic intelligence agency got a further tip-off that the three fugitives were in Chemnitz, but they escaped yet again. Were they warned? In 2002, the father of Uwe Mundlos, the third member of the gang who killed himself with Böhnhardt last month, is said to have received an anonymous letter claiming that one of Mundlos' partners in the trio was an informant for the Thuringia intelligence agency.

The father responded by filing a legal complaint against persons unknown for aiding their escapes from the authorities. But the case came to nothing. The police and justice system also felt obstructed by the intelligence agency, records show.

Authorities in Chemnitz at the time faced a rapidly growing right-wing extremist scene. The Saxony intelligence agency concluded that "the danger of the planned use of violence by unpredictable individuals or conspiratorial small groups is constantly present."

The agents were close to their targets. The 1998 annual intelligence report compiled by the agency for the state of Saxony said the regional branch of the extremist network "Blood & Honour" was "one of the most significant in Germany." The local neo-Nazi group published a newsletter called "White Supremacy" in which an anonymous author railed against "comrades" who don't "focus their lives on combat but on pleasure." He complained about beer-drinking skinheads and lazy activists.

"Those who aren't prepared to take an active part in the fight and in the movement are passively supporting everything that opposes our people and our movement." The "anti-German mob" needed a "kick in the ass," the author wrote. That was why "nationalist parties" needed to be supported.

The intelligence agency for the state of Brandenburg believed it knew the author of the article and informed their colleagues in Saxony that it was probably Uwe Mundlos.

The publisher of the newsletter was a man called Jan W., who, the Brandenburg agents believe, supplied the trio with weapons and had contacts with the "White Brotherhood Erzgebirge." Erzgebirge refers to the Ore Mountains in the eastern state of Saxony. Investators are probing the suspicion that it was via this group that the Zwickau cell met Andre E. -- the alleged producer of the infamous DVD in which the terrorists bragged about their crimes.