SPIEGEL: Mr. Steinmeier, you played a part in negotiating the political agreement between Ukraine's government and its opposition. What was at stake?

Steinmeier: We sat and negotiated for over 20 hours. When we arrived, black smoke was already rising above Independence Square, and you could hear gunshots. We were constantly hearing about the rising death toll. Everybody knew that our negotiations were the last chance for a political solution. I think it made people more prepared to make the necessary compromises.

SPIEGEL: Did Russia try to thwart your efforts?

Steinmeier: Russia backed our roadmap. President Putin sent an emissary to Kiev on Thursday -- he negotiated during night and was very constructive. The Russian delegate helped build bridges while putting together the text. It was also in Russia's interest to end the bloodshed.

SPIEGEL: It had seemed, previously, that Vladimir Putin was encouraging the conflict.

Steinmeier: A week ago I had a long conversation with Putin about the situation in Kiev. He agreed with me, that the worst thing that could happen to Ukraine was for the tug of war between the East and the West for the country to continue for the next ten years. Mrs. Merkel has also kept in touch. Anarchy and civil war right next door -- that is definitely not in Russia's interest. And as a "failed state," Ukraine would topple towards the East -- and become a burden for Russia.

SPIEGEL: Former Chancellor Gerhard Schröder, a Social Democrat like yourself, has said the Europeans are ill-suited to mediate in Ukraine because they have interests of their own. What made you, along with your colleagues from France and Poland, decide to travel to Kiev?

Steinmeier: The decision came together in the last few days during talks with Laurent Fabius and Radek Sikorski. It was a trip into the unknown. We were aware of the danger because an agreement seemed unlikely, but we still believed that we had a responsibility to at least try to figure out a way from the outside to keep the situation from escalating. That said, we had no idea that the body count would continue to rise on the day of our arrival.

SPIEGEL: In hindsight, was it wrong that the EU made Ukraine choose between Russia and EU with the Association Agreement? Don't European leaders carry some responsibility for the escalation of tensions?

Steinmeier: It's spilled milk. But we shouldn't forget that it was Ukraine that wanted the Association Agreement with the European Union.

SPIEGEL: Opposition leaders like Vitali Klitschko called for sanctions early on. The United States were in favor of them as well. Should Europe have listened?

Steinmeier: Only pushing for sanctions is not good policy. Sanctions need to be a means to an end. They cannot be an end in themselves. Ultimately, I think we used this tool responsibly.

SPIEGEL: Did Russia suddenly realize it was in its best interest to cooperate with the West?

Steinmeier: Russia is an important partner but not a simple one. We've reached solutions with Russia about Syria's chemical weapons, the Iran dossier, and now Ukraine. Elsewhere that hasn't been the case. In those latter circumstances, we continue talking and searching for common ground.

SPIEGEL: So you want to continue the Russia policies that put you in conflict with the Chancellery during your first term as foreign minister from 2005 to 2009?

Steinmeier: What's the alternative? Sitting insulted in the corner and refusing to talk? In foreign policy, if we make a habit of being uncommunicative with countries that don't share our politics, we won't get anywhere in resolving many of the world's crises.

SPIEGEL: It's not about whether we should be talking to the Russians, but how. Back then, you argued for the soft-spoken approach -- without much success.

Steinmeier: History judges the success of a foreign policy. And it's yet to be proven that shouting your arguments through a megaphone will work in your favor. Russia is a European country and I want it to stay that way. There are justifiable criticisms of Russia -- we have significantly different ideas about the rule of law and civil liberties. In spite of that, we want to try to enact positive change and work more closely in the areas where we agree. I've called this the "positive agenda."

SPIEGEL: During your first term, you also initiated discussions with Syrian President Bashar al-Assad. Have the ensuing developments in Syria proven you wrong? Today, the idea that Assad could become a partner of the West seems unrealistic.

Steinmeier: You think? Back then I found the division of the world into black and white along the Axis of Evil to be much more unrealistic. I pushed for talks with Assad at a time when he was not yet as ideologically obstinate. I thought it was possible that him having a connection to the West could have allowed us to have greater influence over the developments in the country. I'm less certain than you are that that was incorrect.

SPIEGEL: So if people had listened to you, it wouldn't have come to this?

Steinmeier: Syria is teaching us that we need to more closely analyze political conflicts before we make decisions.

SPIEGEL: And what will be the consequences?

Steinmeier: On the short- and even middle-term, I don't see a possible political solution in Syria. We will already have achieved a lot if we can put a stop to violent confrontations over local cease-fires and humanitarian access.

SPIEGEL: For someone who wants an active foreign policy, that sounds very modest.

Steinmeier: An active foreign policy doesn't mean having an immediate solution prepared for every conflict. International conflicts all too frequently take two weeks to start and two decades to be solved.

Steinmeier: In Germany we've gotten very used to commenting on the behavior of others. We often know exactly what the English, French and Americans are doing wrong. But we are not willing to do more ourselves. I'd like to change that: We shouldn't wait until the kid is already lying at the bottom of the well.

SPIEGEL: That didn't always bother you. When the UN Security Council gave the green light for an intervention in Libya three years ago, Germany abstained. You agreed with that decision.

Steinmeier: We need to keep those two things separate. The vote in the Security Council was one thing, the German decision not to contribute militarily was another. I thought it was the right thing for Germany not to take part in the intervention, and I still do. And I'm not very impressed by what those who dropped bombs on Libya have left behind.

SPIEGEL: And the vote in the Security Council?

Steinmeier: We could argue about that, but that's water under the bridge. I want to make the case that we should exert influence on conflicts earlier and more decisively, and get involved wherever we may have influence. The situation in Kiev shows that it works.

'The Chancellor Has Nothing Against Germany Being More Visible'

SPIEGEL: That sounds as if you're mostly talking about diplomacy. When it comes to military intervention, you yourself have said that a culture of restraint cannot become a culture of disengagement. Has that too frequently been the case in the past?

Steinmeier: At the end of the nineties, I was part of our decision to take part in the NATO airstrikes against Serbia. We said no to the war in Iraq and yes to the deployment in Afghanistan. You have to look at those decisions together. Those were very difficult choices that were made with a lot of responsibility. That will continue to be the case in the future.

SPIEGEL: Then why do we need this new foreign policy?

Steinmeier: The world has changed and we need to do a few things differently. People have noticed that foreign policy's reputation has begun to improve again. But that's not enough. In the Foreign Ministry, I have introduced a policy of self-review in order to kick off a public debate about the terms and perspectives of German foreign policy. We want to ask whether German foreign policy has emphasized the right things in recent years.

SPIEGEL: Do you think the chancellor also believes it is time to take a critical look back at the past four years?

Steinmeier: To my knowledge, the chancellor has nothing against Germany being more visible in the world and concentrating on its core foreign policy challenges.

SPIEGEL: Angela Merkel has been extremely restrained when it came to military deployments. The Merkel Doctrine favors arms deliveries to conflict areas so that regional players can determine their own outcome.

Steinmeier: Germany's arms export policy will remain restrictive. That is a core conviction of the Social Democrats. But we want to go further, namely, we want to make arms exports more transparent. That will change the nature of such deals in the mid-term. In the future, tank deliveries to Saudi Arabia won't be so simple.

SPIEGEL: We've spoken about difficult partners, and on Thursday you'll be visiting one. What will you tell US Secretary of State John Kerry about the mood in German parliament?

Steinmeier: The United States look at the balance between freedom and security differently than the Europeans, especially the Germans. It has a lot to do with history. The divide is a deep one and we cannot underestimate the work that lies ahead of us. I doubt, by the way, that a "no-spy agreement" will get us very far.

SPIEGEL: The Americans continue to spy on us unapologetically and your reaction is: Let's talk about it?

Steinmeier: I don't believe the Americans will continue to act as they have. Washington has hopefully understood that the way it treats its partners can have a political price. In other areas, the European and American concept of privacy is still very different. I'd like to talk about this with Secretary of State Kerry.

SPIEGEL: Mr. Steinmeier, thank you for this interview.

Editors' Note: Some questions and answers from the original print version have been cut from this version because events over the weekend in Ukraine made them irrelevant.
Mehr lesen über
German Foreign Policy Frank-Walter Steinmeier Ukraine Syria Russia NSA Spying Scandal 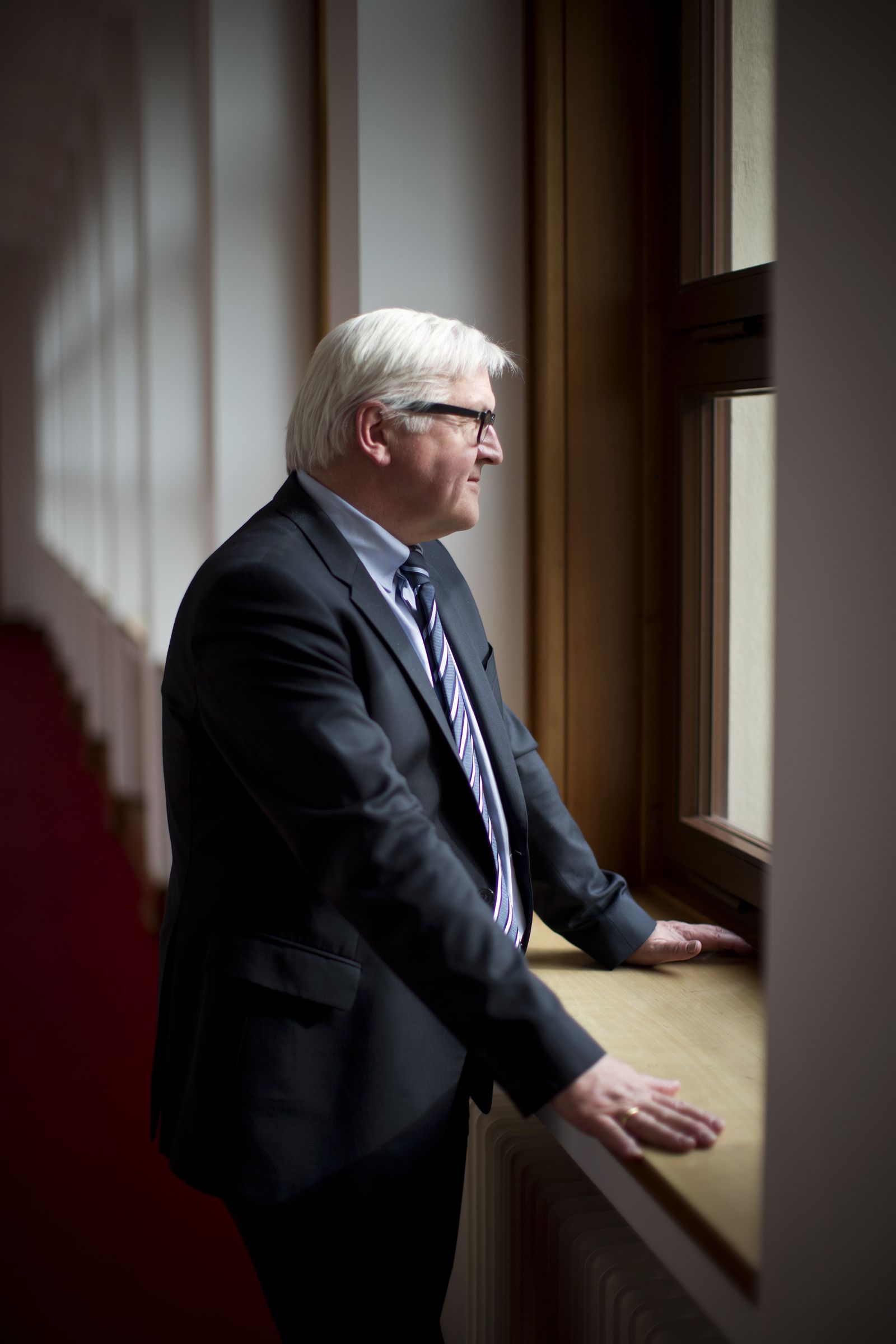