German aviation union GdF has said it will expand its intermittent strike actions at Frankfurt Airport on Wednesday. Around 200 ground workers have already been striking in recent days at the airport, leading to the cancellation of hundreds of flights. Now, the union has asked air traffic controllers in the tower to join them in solidarity on Wednesday between 5 a.m. and 11 a.m. local time. German airline Lufthansa and the airport's operator said they would seek a court injunction against the strike expansion.

With the air traffic controllers' solidarity strike, the union is seeking to increase pressure by causing the cancellation of hundreds more flights at Germany's most important airport. "The step is meant to show solidarity with the GdF members in the struggle against Fraport," the union said in a statement, referring to the company that operates Frankfurt Airport.

However, German Transportation Minister Peter Ramsauer has warned that an expansion of the strike to the control tower could lead to "disastrous consequences" for air traffic -- and not only within Germany, but also around the world.

The strike began with around 200 ground workers who manage taxiways and the so-called "apron" (the paved area next to the terminal and hangars) walking off the job. They are responsible, in part, for guiding planes to their final park position. Airport officials claim the union is demanding large wage increases running as high as 50 to 70 percent and shorter working hours. Negotiations between Frankfurt Airport and the GdF union collapsed on Friday.

State-owned German air traffic control firm DFS and Frankfurt Airport operator Fraport issued a statement on Tuesday describing the appeals for air traffic controllers to join the strike as "irresponsible, inappropriate and out of proportion."

The union has been striking for more than a week now, but it has so far failed to achieve its goals. In the meantime, airport operator Fraport has been able to successfully find replacements for many of the striking ground workers. On Monday, around 200 of a total of 1,286 flights at the airport had to be cancelled. Since the start of the strike, long-haul flights have been largely unaffected, and most of the cancelled flights have been on domestic routes in Germany and to destinations in Europe.

'A Wildfire that Is in No Way Justified'

Both airport operator Fraport and German flag carrier Lufthansa have said they are considering taking legal action to stop the expansion of the strike. Fraport officials claim the walk-off would lead to massive disruptions of global air transportation and cause enormous economic damage. "GdF leaders are trying to create a wildfire here that is in no way justified," Fraport's Herbert Mai said on Tuesday. Fraport officials claim that GdF has been unreasonable in its demands. The company claims that each day of the strike costs Fraport around €1 million. Lufthansa, whose largest operations are based in Frankfurt, has been the airline most affected by flight cancellations so far. The company claims it has already accumulated losses in the double-digit millions as a result of the strike.

Lufthansa officials said Tuesday they would seek a court injunction against the strike, claiming that GdF is abusing the state monopoly on air traffic controllers by appealing for them to join the labor action.

Other unions have also opposed GdF's demands, saying that pay hikes for the 200 workers on strike would be unfair to other ground staff. Frankfurt Airport, Europe's third largest, has 20,000 ground staff, according to the German news agency DPA. Solidarity strikes are permitted under German law, but only if they remain within reason. The strike has reopened the debate in Germany over whether laws should be changed in order to prevent relatively small labor organizations from causing massive damage. 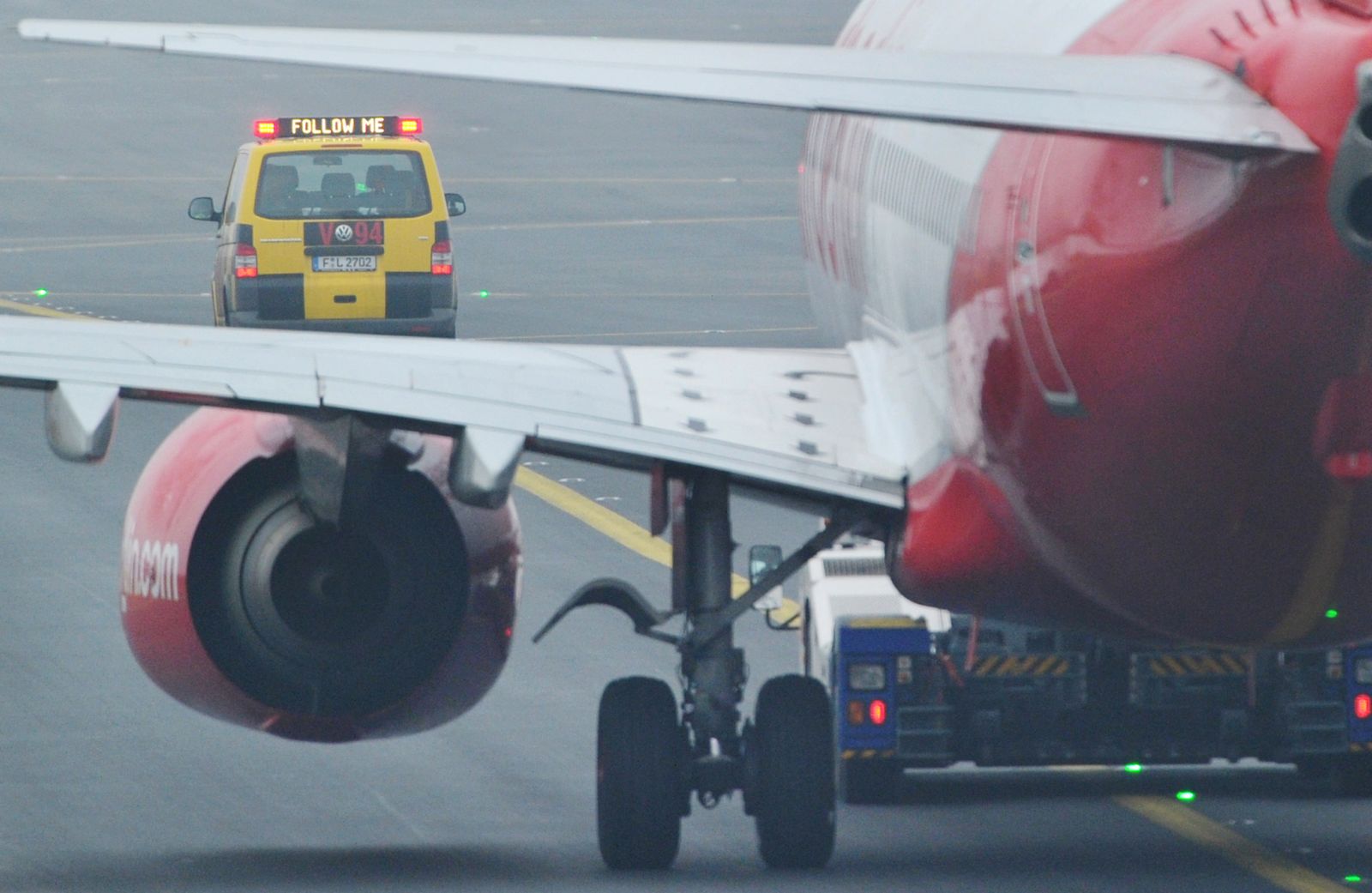 A van guides an aircraft to the gate at Frankfurt Airport: Hundreds of flights have been canceled in recent days because ground workers have gone on strike.