As Germany continues to grapple with the fallout of the discovery of the murderous far-right terrorist group the National Socialist Underground (NSU), researchers have come to the "unsettling" conclusion that right-wing extremist thought has increased in the country.

Just last week, federal prosecutors formally charged the last surviving member of the neo-Nazi NSU, which is suspected of committing 10 murders, two bomb attacks and 15 armed robberies in the last 12 years. The case shocked Germany when it broke last year, bringing the issue of right-wing extremism to the forefront of public debate. Though some argue that it exists only on the fringes of society, the researchers behind the study released on Monday conclude that these attitudes are widespread throughout Germany.

Starting in 2006, the Friedrich Ebert Foundation, which has ties to the center-left Social Democratic Party (SPD), began publishing "Movement in the Middle," a series of biannual nationwide surveys the organization calls a "barometer of current anti-democratic attitudes in Germany."

Since the publication of the last results in 2010, the foundation has registered an increase of right-wing extremist attitudes from 8.2 to 9 percent across the country, with xenophobia found to be the most prevalent manifestation, a prejudice held by 25.1 percent of the population. The development demands attention, the researchers say.

"Action at all levels -- whether it is in education work, the media, civil society or democratic parties -- is urgently needed," the report says. "Because the approval that right-wing extremist messages receive within the German population is unsettling for a number of reasons."

The study, based on surveys conducted in the summer of 2012, found that the prevalence of right-wing extremist attitudes varied greatly according to region. Compared to 2010, western German states actually showed a slight reduction, down from 7.6 percent to 7.3 percent overall. But there was a strong jump in the states that belonged to the former East Germany, up from 10.5 to 15.8 percent, the highest level ever measured by the researchers, who say it continues to rise.

According to their estimation, the region's weak economy is largely to blame. When it comes to anti-foreigner sentiment, the study found that some 20 percent of western Germans hold such attitudes, compared to 39 percent of people in the east. Since 2004, that figure has fallen from about 25 percent in the west, but risen from one-quarter of all people in the east.

Unlike the results of previous surveys, this time young people from eastern Germany aged 14 to 30 showed a higher level of approval for things like a right-wing authoritarian dictatorship, chauvinism, social Darwinism and the trivialization of National Socialism, than those over the age of 60. And while on a national average every eleventh German has anti-Semitic attitudes, levels were higher in eastern Germany than in the west for the first time.

"It is especially worrying that the study shows a new generation of right-wing extremism," the authors write. While in the past young people were considered to be less susceptible to these ideas, now it is exactly this group that stands out. "The structural problems in eastern Germany, which have still not been adequately addressed even 20 years after reunification, are reflected here, as is this generation's feeling that they are not needed," they add.

Still, the researchers warned against classifying the problem as an eastern German one, explaining that socio-economic structures have far more influence than location. Big cities like Hamburg and Berlin, for example, showed more heartening results than rural areas. People from urban areas with more immigrants, it turns out, exhibited greater tolerance.

For the first time, the study included respondents who did not have German citizenship, finding that these people often feel politically and socially marginalized. It is "not surprising," the study says, that immigrants showed lower levels of right-wing extremist attitudes.

"The basis for right-wing extremist attitudes in Germany remains high," the study's authors conclude. While they were optimistic in 2010 that strengthened social structures would be enough to combat such a development, this time their conclusion is "more cautious," they add.

Another factor behind the trend seems to be a measurable "erosion of solidarity" within society, which results in the marginalization of not just immigrants, but also those struggling to get by in society like the unemployed and homeless.

Education is the leading "protective factor" against the further spread of right-wing extremist thought, though. According to the study, people who complete university-track secondary education programs are far less likely to hold such views than those who do not. More civic and educational programs are needed to combat this issue, the study concludes, and it also calls on the media to remember its responsibility to release balanced reports on these issues. 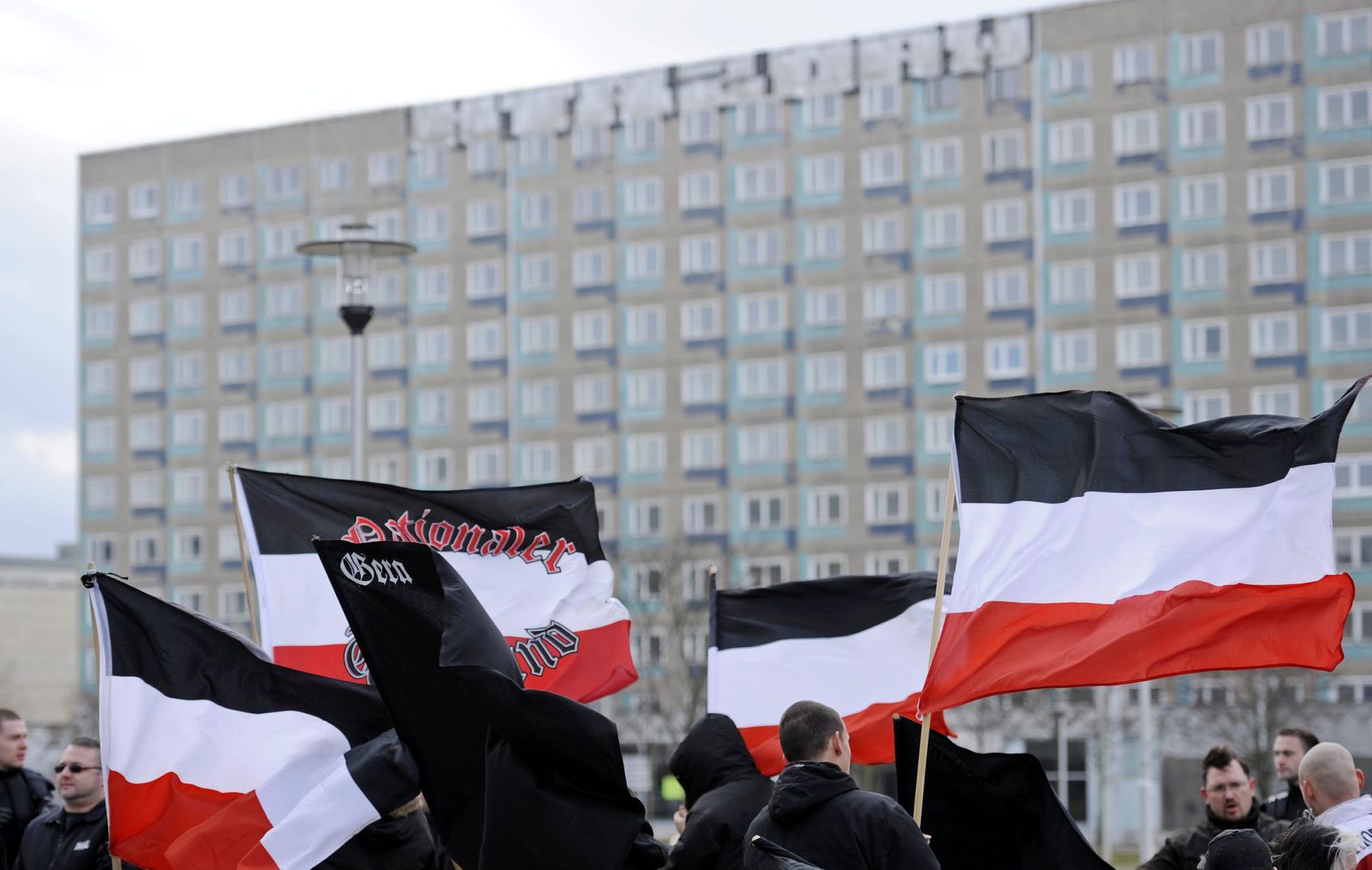 Far-right supporters take part in a rally organized by the neo-Nazi party, the National Democratic Party (NPD), in the eastern German city of Gera in this archive photo from 2011.