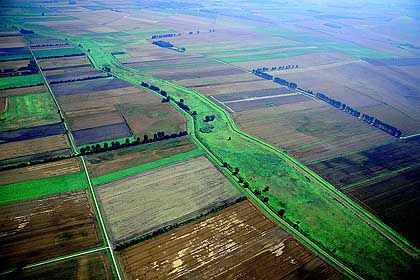 A stretch of the Green Belt that divides Germany and provides a haven for wildlife.

The "inner German border," which separated East and West Germany, stretched 1,400 kilometers (879 miles) from the Baltic Sea down to the Czech Republic. It was covered in barbed wire, surrounded by mines and booby trapped with automatic spring guns, while soldiers patrolled the barrier intent on preventing any East German citizens escaping to the West.

At the same time, this strange border developed a completely different function: It became a haven for wildlife. The no-man's-land that emerged, ranging from 60 to 200 meters wide, provided the ideal conditions for the flourishing of flora and fauna. Up to 600 endangered species, including the black stork and the lady's slipper orchid, thrived in this unusual terrain.

Then the Berlin Wall fell in 1989 and Germany was reunited. There were immediate attempts to jump in and fill the void with buildings, streets and farmland. Motorways and train tracks were even laid in some places. But Germany's environmentalists soon took action. They campaigned to protect the area, known as the Green Belt. It now forms part of a European Green Belt winding its way along the route of the former Iron Curtain from the north of Finland down to the Adriatic Sea. 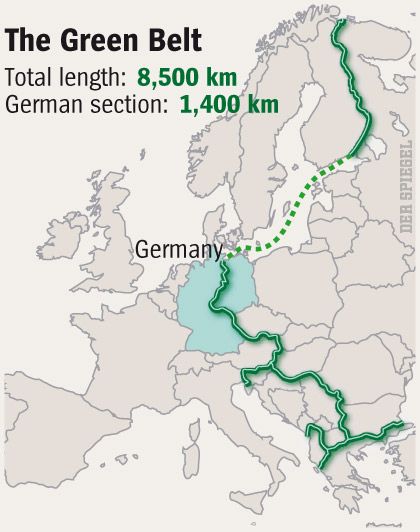 But 18 years after reunification there has been little done to legally protect the area, which has been caught in bureaucratic limbo. Since reunification, the Green Belt has been the responsibility of the federal government. But in Germany it is the 16 states and not the federal government in Berlin that are responsible for nature protection policies. Handing over the reins to the states, however, has proved difficult. Finally, after years of wrangling over which side should bear the costs, the states along the former border and the Berlin government struck a deal last month.

The Berlin government first made a committment to transferring responsibility to the states back in 2003. Dr. Liana Geidezis, who heads the Green Belt project at BUND, the German branch of Friends of the Earth, told SPIEGEL ONLINE it is "a joke that it has taken five years to come to an agreement over just 9,000 hectares."

The southeastern state of Thuringia, which accounts for 763 kilometers or over half the total length of Germany's Green Belt, represented the states in the negotiations. At one point it threatened to pull out of the talks if the federal government did not agree to cover at least some of the administration and personnel costs. At the end of April, a breakthrough was announced, but both sides have agreed not to release further details for the time being. A spokesperson for the Finance Ministry in Berlin told the Süddeutsche Zeitung that "there is still the need for a little more negotiating about the states taking over the costs." The parliament's budgetary committee will also have to look at the deal.

Environmentalists are hoping that the agreement will be made official soon, allowing the states involved to form an association to provide comprehensive nature protection. Melanie Kreutz of the Bavarian section of BUND told SPIEGEL ONLINE that the group had even bought up pieces of land along the former border as they became available. But this still only accounts for 2 percent and it has been difficult to carry out research or to implement concrete measures to protect certain species.

What has made this green corridor remarkable is the interlocking of over 100 types of biotopes, including forests, fens and meadows. Hubert Weiger, president of BUND, told the Süddeutsche Zeitung on Tuesday that "in other places species become extinct because their habitats shrink to islands due urban sprawl." According to Geidezis this is unique in Central Europe. "You don't find these connecting biotopes in Europe any more. Most have been split up, preventing animals from traveling from place to place." 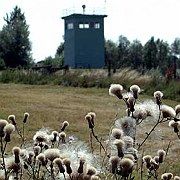 Currently only one-third of the total area of the Green Belt is actually designated as a nature conservation area. BUND would like to see that increase. While around 20 percent of the 1,400 kilometers can no longer be described as wilderness, that still leaves a huge stretch of unique landscape where endangered species have found refuge.

There are still numerous threats to the wildlife along the belt. For example, BUND is currently campaigning against plans to expand a border crossing between the southern state of Bavaria and the Czech Republic. Kreutz says that there are already crossings every 20 to 30 kilometers along that border, and that plans to extend pedestrian border crossings to make them suitable for vehicles threatens creatures such as the black stork and otters.

Kreutz emphasizes that BUND has no problem with people using this green area for leisure activities such as walking or cycling, as long as they respect the sensitivity of the habitats. "We want to encourage people to experience the Green Belt visually," says Kreutz. "It should be a place to go hiking and to relax."

The timing couldnt be better for pushing German officialdom to do something about its neglected Green Belt. Next Monday, the United Nations Conference on Biodiversity kicks off in Bonn and BUND president Weiger told SPIEGEL that the Germany will find it "difficult to explain" to its international guests why it is still wrangling over the details of protecting such a vital area for its own biodiversity.

Kreutz and Geidezis both hope the approaching conference will spur the government to make an announcement about the final handover of responsibility for the Green Belt to the states. If this doesn't happen, Geidezis says, it would be a "farce."

"It's pretty embarrassing," Kreutz says. "Germany asks other countries, such as those in South America, to protect their environments. And here we have a relatively small area and not much has been done to protect it."