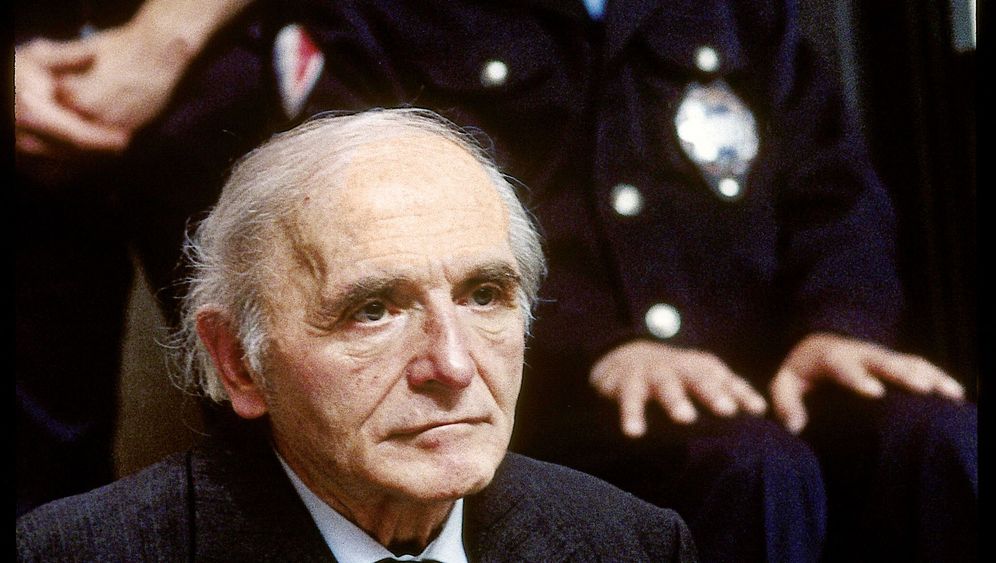 The man who Germany's foreign intelligence agency, the Bundesnachrichtendienst (BND), listed in its files as Wilhelm Holm belonged to a unique species in the shadowy world of intelligence. The overweight German businessman with the carefully combed dark hair was a so-called "tipper."

Whenever Holm noticed someone during his travels around the world who seemed to have the makings of an agent, he would send a message to BND headquarters in Pullach near Munich. In 1965, for example, after he had spent four weeks in the Bolivian capital La Paz, he raved about a fellow German who had two important virtues: He was apparently a staunch German patriot and a "committed anticommunist" -- something that was practically a badge of honor during the Cold War era.

A few weeks later, the BND hired the new man as an agent. He was given the code name "Adler" (eagle) and the registration number V-43118. "Adler" lived in La Paz under the name Klaus Altmann.

But Altmann wasn't his real name. In reality, he was one of the vilest criminals of the Nazi dictatorship: Klaus Barbie, the notorious "Butcher of Lyon." After the war, French courts sentenced Barbie, the former head of the Gestapo in Lyon, to death in absentia. There are many indications that the BND was aware of all of this when it decided to hire him.

Barbie, who was born in 1913, personally tortured men, women and even children on the second floor of the Hotel Terminus in Lyon. The surviving victims remember, most of all, the way Barbie would laugh quietly while he tortured them. The son of a teacher from the town of Bad Godesberg, which is now part of Bonn, Barbie also had his henchman break the arms, legs and several ribs of Jean Moulin, a figurehead of the French Résistance and a confidant of the later French president, Charles de Gaulle. Moulin died soon afterwards. Barbie also ordered the deportation of Jewish children from an orphanage in Izieu near Lyon. The children were shipped to the Auschwitz concentration camp, where they were murdered.

For the last two decades, there have been suspicions that Altmann, alias Barbie, was a spy for Germany's foreign intelligence agency. But those suspicions have only now been confirmed by BND files that SPIEGEL has analyzed in Germany's federal archives in the city of Koblenz. According to the files, Barbie received his first monthly payment, in the amount of 500 deutsche marks, from Pullach in May 1966. He later collected performance bonuses. In most cases, the BND made the payments by wire transfer into an account with the Chartered Bank of London in San Francisco. According to the BND files, Barbie delivered at least 35 reports to the agency.

The arrangement eventually became too dicey for the intelligence agency. There was talk of a "substantial security risk" to the BND, which was apparently increasingly concerned that the East German Stasi or the Soviet KGB could blackmail Barbie by threatening to disclose his Nazi past, as they had already done with a few other BND agents.

His handler, who was code-named Solinger, met with Barbie in Madrid shortly before Christmas in 1966 and told him that, because of the federal government's tight finances, the BND's "budget had been cut significantly." Latin America, Solinger told Barbie, was being abandoned as a "reconnaissance region." Barbie was paid an additional 1,000 deutsche marks in hush money.

Convicted of Crimes against Humanity

For the BND, the "Adler" case was now closed. The spy agency also opted not to notify the German judicial authorities of the whereabouts of Barbie, even though he was a wanted murderer and war criminal.

Barbie's cover wasn't blown until 1972, when he was tracked down by the legendary French Nazi-hunters Beate and Serge Klarsfeld. A diplomatic tug-of-war followed that lasted for years. Bolivia eventually extradited Barbie to France in 1983, where he was convicted of crimes against humanity and imprisoned until his death in 1991.

Today there is no one left at the BND who was responsible for the Barbie case or who could be held responsible. The revelations about the agency's inglorious role in the affair might even come in handy for the current BND president, Ernst Uhrlau. For years, he has wanted to shed more light on the history of the BND in the postwar period, when it employed a number of former Nazis. He is currently negotiating with a historical commission which would be tasked with researching the agency's past and given unprecedented access to its files. Cases like Barbie's reinforce the need for such an initiative.

The Americans declassified extensive intelligence files about Barbie about 30 years ago. The Counter Intelligence Corps (CIC), a former intelligence agency within the US Army, hired Barbie after the war and, for a time, protected him from French criminal investigators. In 1951, the Americans even helped Barbie flee to Bolivia. In an unusual turn of events, Washington later issued a formal apology to Paris as a result of these actions.

According to the files, the BND's cooperation with Barbie began with the tip it received from Wilhelm Holm. Of course, some of the former SS men and Gestapo officials who were now with the German intelligence agency must have recognized the new agent from their days in the Third Reich. At least one of them, Emil Augsburg, a former SS expert on Eastern Europe, had worked with Barbie for the CIC. The Gehlen Organization, the precursor to the BND, was also aware of Barbie's address in the Bavarian city of Augsburg until he fled to Bolivia. A BND document dating from 1964 even states that Barbie was "possibly" living in La Paz.

At the time the BND, which initially operated only in Europe, was expanding its network of agents around the world and was paying close attention to Bolivia, which was governed by a military junta. The West feared that a revolution against the military leadership could lead to the country becoming part of the Soviet sphere of influence, like Cuba.

Barbie alias Altmann lived with his wife in the Bolivian capital, where he ran a company called La Estrella, which supplied the Boehringer pharmaceutical company in the western German city of Mannheim with cinchona bark, from which the medication quinine was extracted.

In late November 1965, BND tipper Holm paid a visit to Barbie. A mutual acquaintance had set up the meeting. Holm told Barbie that he was looking for an agent for a Hamburg company and asked him whether he would be interested. Barbie apparently trusted his visitor. According to BND documents, the two men became "good friends" within a short period of time. Holm dined with the Barbie family almost every day at their table at the German Club in La Paz.

Of course, the host appears to have concealed his true identity from Holm. "Altmann," the tipper noted, had been with the Waffen SS and had fled from East Germany in 1950. But Holm did not fail to notice the expatriate's political leanings. For example, Barbie alias Altmann told him the story of how Jews had been barred from membership in the German Club. Barbie's wife, who ran the club's library, was "particularly proud" to show Holm its Nazi literature.

The BND's Department 934, which handled such cases, decided to recruit the former SS captain. They were interested in the good contacts that Barbie bragged about, such as with the Bolivian interior minister and his deputy, as well as with the head of one of the country's intelligence agencies and the mayor of La Paz.

Barbie's handler Solinger traveled to the Chilean capital Santiago in May 1966 to officially hire the new man and provide him with "intensive" training. The two men agreed that important information would be disguised as economic news from the lumber industry. Barbie was to note the information on special paper -- "leaving a 3 cm (1.1 inch) margin all around, with no punctuation, and with no writing on the centerfold" -- and send it to a teacher in Bad Bevensen in northern Germany, who would then forward the letters, unopened, to a post office box in Hamburg.

Barbie was officially classified as a "political source." The exact content of his reports is not known, however. Perhaps he merely observed developments in Bolivia, or his work may have been focused on the German military, the Bundeswehr. A few weeks after being recruited, he became the Bolivian representative for Merex AG, a Bonn-based company that sold Bundeswehr military surplus materials worldwide on behalf of the BND. According to BND records, Barbie was to notify the Merex people whenever the Bolivians lacked weapons or ammunition.

It is clear that the BND was very satisfied with Barbie's work. Agent 43118 was described as "intelligent," "very receptive and adaptable" and "discreet and reliable."

After Barbie was identified by the Klarsfelds in 1972, the people at the BND who had been involved with Barbie claimed internally that they had only learned Altmann's real identity from the press. The administration at the time had apparently "neglected to obtain official information about Altmann, even though this would have been appropriate in light of his past."

It is highly likely that this version of events was a lie. Even Altmann's explanation to Holm that he had fled directly from East Germany to Bolivia should have triggered an extensive background search. Indications of that search can be found in the Barbie files, which are clearly incomplete.

Most of all, however, Solinger made notes about Barbie's past at their first meeting. Based on this information, it was clear that the new agent worked during the war for the Reich Security Head Office, the SS organization that organized the Holocaust. It was also clear that he was being sought by the French for alleged war crimes. It is hard to believe that Barbie did not take this opportunity to reveal his true identity, or that the BND staff did not at least do the relevant research after the fact.

A few intelligence officials who were not in the loop became suspicious when agent V-43118 refused to travel to Germany for training. "Could it be that there is some evidence against him -- SS?" one official wrote in a handwritten comment on Sept. 13, 1966. A few weeks later, everyone involved knew that the public prosecutor's office in Wiesbaden was searching for Barbie on the basis of a preliminary investigation by the Central Office for the Investigation of Nazi Crimes in Ludwigsburg.

Through a middleman, he had contacted a propaganda official with the East German communist party, the SED, in East Berlin, with a request to search the East German archives for incriminating information about Motz from the Nazi era. Such actions were "not exactly indicative of an appropriate attitude," according to the BND files.

In the fall of 1966, the agency decided to part ways with Barbie, "to avoid later complications and difficulties." It was, it turns out, wishful thinking.