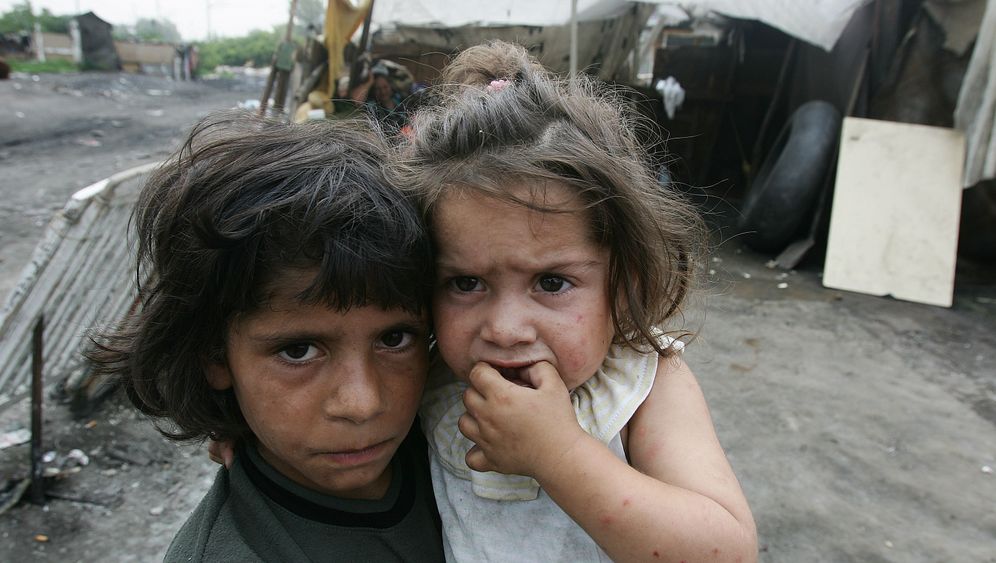 By most European standards, the Marienfelde Refugee Center on the southern edge of Berlin is not luxurious accommodation. But the three-story buildings that house asylum seekers do feature heating, hot water and ceiling lights -- things that for 33-year-old Sashko Tomovski and his family are lavish amenities.

"This for us is Las Vegas," Tomovski, an asylum seeker from the Republic of Macedonia, said as he stood outside his modest apartment building at the center. Until recently, he said, he and his wife and their three young daughters lived in a flimsy shelter with no electricity, heat, or running water in a Roma settlement in eastern Macedonia he called "hell."

Asylum seekers from the Western Balkans like Tomovski have recently been arriving in Germany and other European nations in steeply rising numbers. While Afghans and Iraqis have comprised the top two groups seeking asylum in Germany for the last two years, applicants from Serbia and Macedonia were unexpectedly third and fourth on the list in 2010, accounting together for 7,444 applications -- and most of them are Roma or members of other minority groups.

The development is attributed not to worsening trends of oppression or conflict in Serbia or Macedonia, but to the lifting of visa requirements for travelers from these two countries to the 25 European nations within the Schengen border-free travel zone. That change, which went into effect at the end of 2009, was seen as a step toward integrating Southeastern European countries into the European Union.

But the move also made it far easier for potential asylum seekers from the two nations to travel within Europe. Last December, visa restrictions for Bosnia-Herzegovina and Albania were also lifted, raising concerns among European Union officials that even more asylum seekers may be on the way.

The rise in asylum applications from Serbia and Macedonia "points to the extreme poverty and continued exclusion suffered in particular by Roma in these states," the German refugee rights organization Pro Asyl said in a statement. Roma communities in the Balkans and much of Europe face inadequate housing conditions, with widespread discrimination leading to forced evictions, lack of access to social housing and underemployment, say human rights groups.

Such conditions, however, have not been deemed reason for giving Roma refugee status. Not a single applicant from Serbia or Macedonia was granted asylum in Germany last year, and European Union officials see the influx of applications from these nations as an abuse of asylum systems.

"Such asylum applications were and will also henceforth be consistently and speedily rejected, so that the duration of the illegitimate residence in Germany and the associated burden on public finances is minimized as much as possible," Thomas de Maizière, who was interior minister at the time, said in a statement earlier this year. De Maizière has since taken over the defense portfolio in Chancellor Angela Merkel's cabinet, but the sentiment is unlikely to change under his successor, Hans-Peter Friedrich.

Asylum seekers in Germany and other European nations are provided benefits such as housing, medical care and modest sums of money for food and clothing during the several months it may take to process an asylum claim.

Other countries have also sought to return the asylum seekers quickly. Last year, for instance, Belgium bussed hundreds of asylum seekers back to Serbia and Macedonia from Brussels.

European Commission officials have said that the influx of asylum seekers from the Balkans could jeopardize the ongoing process of visa liberalization for countries in the region. Last October, European Commissioner for Home Affairs Cecilia Malmström wrote a letter to the interior ministers of Serbia and Macedonia asking them to take measures to prevent the flow of the asylum seekers to EU member states. Around the same time, an expert mission organized by Belgian authorities and including European Commission members visited Skopje and Belgrade to express their concerns in person.

'A Request to Break International Law'

Border patrol police in Serbia and Macedonia have since taken steps to strengthen controls, checking to see if travelers have return tickets, requesting evidence that travelers have enough money to stay in the Schengen area for their intended stay, and telling potential asylum applicants that their applications will be rejected.

Refugee and Roma rights groups in Germany have condemned the stepped-up border controls. The request to those nations to "keep their citizens from leaving their country is a request to break international law," a coalition of European refugee and Roma rights groups said in a statement. "The idea that citizens would eventually be hindered from leaving their country on the grounds of their ethnic background is unbearable to us against the background of German and European history."

By some estimates, as many as a half-million Roma and Sinti were killed by the Nazis during World War II in what has sometimes been referred to as the "forgotten Holocaust." On Holocaust Remembrance Day earlier this year, Zoni Weisz, a Sinti survivor whose parents and siblings were murdered by the Nazis when he was a boy, became the first representative of the Roma and Sinti people to speak to Germany's parliament, the Bundestag, on the occasion.

"We are Europeans, let me remind you, and must have the same rights as any other residents, with the same opportunities available to every European," Weisz said to the parliament.

Issues involving Roma migration from Southeastern Europe to more affluent European nations have received much attention of late. Last year, France came under harsh criticism for its practice of targeting Roma migrants from Bulgaria and Romania for deportation. Germany has also drawn condemnation from human rights groups for deporting Roma and other ethnic minorities from Kosovo who have lived in Germany since fleeing war in the former Yugoslavia in the 1990's.

Bullied and Beaten Up

Despite increased controls, asylum seekers from Serbia and Macedonia continue to arrive in Germany. Near the end of last year, Tomovski and his family hitched a ride in a bus that delivered them to Hamburg, he said. There, he applied for asylum before being settled at the Marienfelde Center in Berlin.

The center was built nearly six-decades ago to accommodate refugees fleeing East Germany, and by the time of German reunification, 1.35 million East Germans had passed through the camp. Following the recent rise in the number of asylum seekers coming to Germany, the center is once again admitting refugees; it now houses about 270 people, but can potentially accommodate as many as 2,000.

At the Marienfelde Center on a recent afternoon, a group of Roma residents vehemently rejected the notion that their asylum claims were illegitimate. Many had spent several years of their childhood in Germany, having fled the Yugoslav wars in the 1990's, and now wished to return because of what they said was rampant discrimination in their homelands.

One teenager from Serbia who called himself Dennis complained of having been bullied and beaten up in school because he is Roma. "They say, 'this is not your land,'" he said. "If you fight back, they'll kill you."

'No One Wants to Help'

Dennis said he arrived in Germany several months ago with his parents and brother. The family had learned a few days earlier that their asylum request had been denied and they were given a few weeks to leave Germany.

"We want to stay," he said. "We have nothing there. My father can't find a job. We can't earn anything."

A 27-year-old man who also said he came from Serbia with his family insisted that the discrimination Roma face there justified their asylum requests. "The problem is we are not even accepted as people," he said of life in Serbia.

He too had recently received word that he and his family would not be given asylum. It felt, he said, as if he had nowhere left to turn.

"Everyone knows how bad the Roma have it," the man added. "But no one wants to help."