Editor's note: Originally published on Aug. 23, 1961, this article from the DER SPIEGEL archive was originally entitled, "City Commanders: They Didn't Hear a Thing." For an analysis of the article by a Berlin historian, click here.

"Whatever happens in East Berlin, we stand by West Berlin." -- British Ambassador to West Germany Sir Christopher Steel, after a tour of East Berlin.

Applause followed the young men as they made their way slowly through the packed crowd to the podium. The words on their large signs were visible from a distance: "Doesn't the West know what to do?" "Where are the protective powers?" and "Betrayed by the West?"

The questions remain unanswered. Even West Berlin Mayor Willy Brandt, a speaker at the protest rally against sealing off the eastern sector, failed to comfort the crowd of 250,000. Unable to conceal his bitterness over the West's failure to react, the mayor shouted hoarsely into the microphone: "Berlin expects more than just words!"

What Brandt said last Wednesday was echoed by President John F. Kennedy's Information Agency Director, Edward R. Murrow, Berlin's most prominent visitor in recent weeks. The Germans are disappointed that the Western powers have so far not reacted more effectively, he said on his flight back to London.

In Berlin he got the impression that, aside from the political border crisis initiated by Walter Ulbricht, the deputy chairman of East Germany's Socialist Unity Party of Germany (SED), the Communist Party, an actual crisis of trust was developing between Berliners and the Allies.

Both the border crisis and the crisis of trust began almost simultaneously -- in the early morning hours of Aug. 13, Berlin's Black Sunday, when Soviet Army tanks rolled towards the sector borders and the Western powers were hardly able to conceal their lack of concern for the latest Berlin crisis. The American, English and French militaries took little notice of Ulbricht's gathering troops.

Thus, Berlin's Interior Senator Joachim Lipschitz felt compelled to block off the western side of the border that had been marked with barbed wire, tanks and machine guns in the East. "Just trying to avoid another Budapest," he said (referring to the Hungarian Revolution of 1956, during which thousands were killed in a violent crackdown by Soviet forces).

Certainly the Allied passivity can't be explained by the claim that they were surprised by Ulbricht's swift attack. Indeed, the opposite is true. Already 48 hours ahead of the Soviet march on the sector border, all American forces in Berlin had been ordered to maintain a heightened state of alert.

Some West Berlin newspapers, among them the Berliner Kurier, have also reported the suspicion that has been circulating in West Berlin since the night between the 13th and 14th of August. The Americans, British and French, the paper writes, were told of the planned closure by their military missions in Potsdam days before the tank operation took place.

In fact, the American military mission at the Soviet supreme command in Potsdam was able to tell the American headquarters in Heidelberg of the troop movements already on Aug. 7.

Some of the divisions called up by Ulbricht from the eastern state of Thuringia and sent marching towards Berlin were definitely meant to strengthen the People's Army cordon around the city, while another portion was to undertake military operations in East Berlin, the US military reported out of Potsdam.

With extreme caution, the Americans stationed in Potsdam indicated that the Soviets did little to hinder their procurement of this secret information.

Three days later, on Aug. 10, the newly named commander in chief of the Soviet troops in the German Democratic Republic (GDR), Marshall Ivan Konev, received three Allied Berlin city commanders for the usual celebratory drinks. The Red Army soldier -- the conqueror of Berlin -- assured the Americans, British and French who had rushed to greet him in Potsdam, that the Allies' rights in West Berlin would remain intact, whatever happened in the foreseeable future.

As soon as something happened the three city commanders were apparently ready to rely on this promise. They reacted with indifference to the violent measures in the following ways:

The level of hesitation by the Western forces, even when confronted with harmless desire for protest, has been revealed by the fate of a proposal delivered to the British city commander by the West Berlin city government. West Berlin wanted to symbolically surround a Soviet Memorial near the Brandenburg Gate and inside the British sector with barbed wire.

Konev's British brother-in-arms, Major General Rohan Delacombe, consulted the British Ambassador in Bonn, Sir Christopher Steel, who conveyed that this difficult question could only be decided after lengthy deliberations by the British government in London. Only on Thursday of last week did the British approve the proposal, and since then Khrushchev's Red Army soldiers have guarded the monument from behind barbed wire. But the Allies are not willing to take more effective measures against them than barbed-wire revenge.

The disappointment of the embittered Berliners over the tepid reaction of their Western protectors grew so great that last Wednesday -- 88 hours after the transformation of the Soviet zone into a concentration camp -- special security measures were implemented to control the protest rally arranged by West Berliner Senator for the Interior Joachim Lipschitz at the Schöneberg district town hall.

Some 12,000 West Berlin police were ordered to use water cannons and rubber truncheons to stop demonstrations that cropped up at Potsdamer Platz, the Brandenburg Gate and even at the American headquarters in the district of Zehlendorf.

Once again, popular speaker Willy Brandt was unable to conceal his disappointment in the Allies' complacency in front of the masses. "Today I openly expressed our thoughts in a letter to the President of the United States, John Kennedy," the mayor said.

But this letter contains such harsh criticism that neither the West Berlin Senate, nor Washington deemed its publication opportune. Instead, U.S. Vice President Lyndon B. Johnson was sent to Berlin for moral support.

"Have you heard that Brandt called for help from the Allies?" East Berlin's star propagandist and television host Karl-Eduard von Schnitzler recently asked his viewers.

Answering his own question, he said: "Yes, I heard, but the Allies didn't." 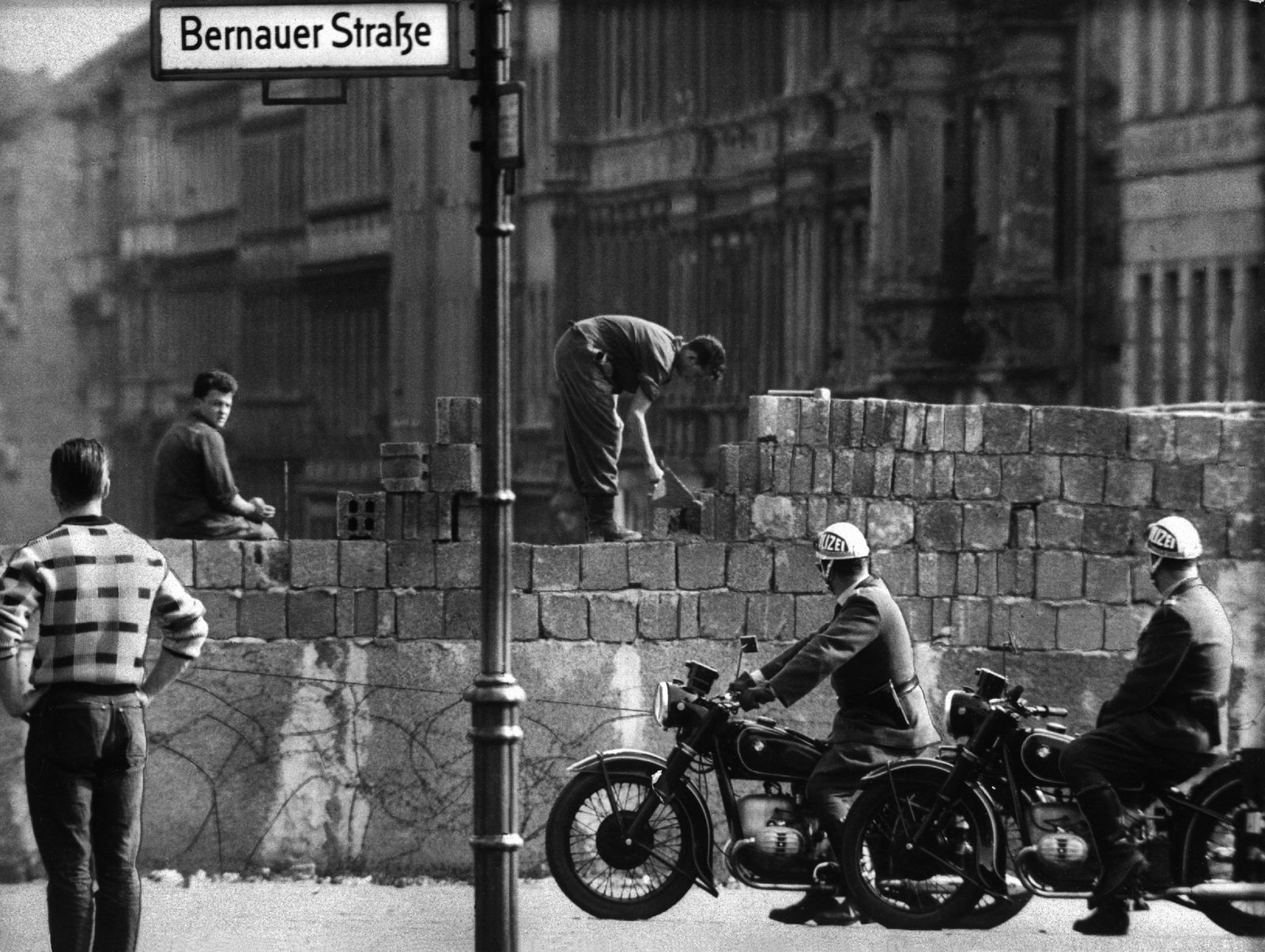 West German police and bystanders watch construction of the Berlin Wall in August 1961.